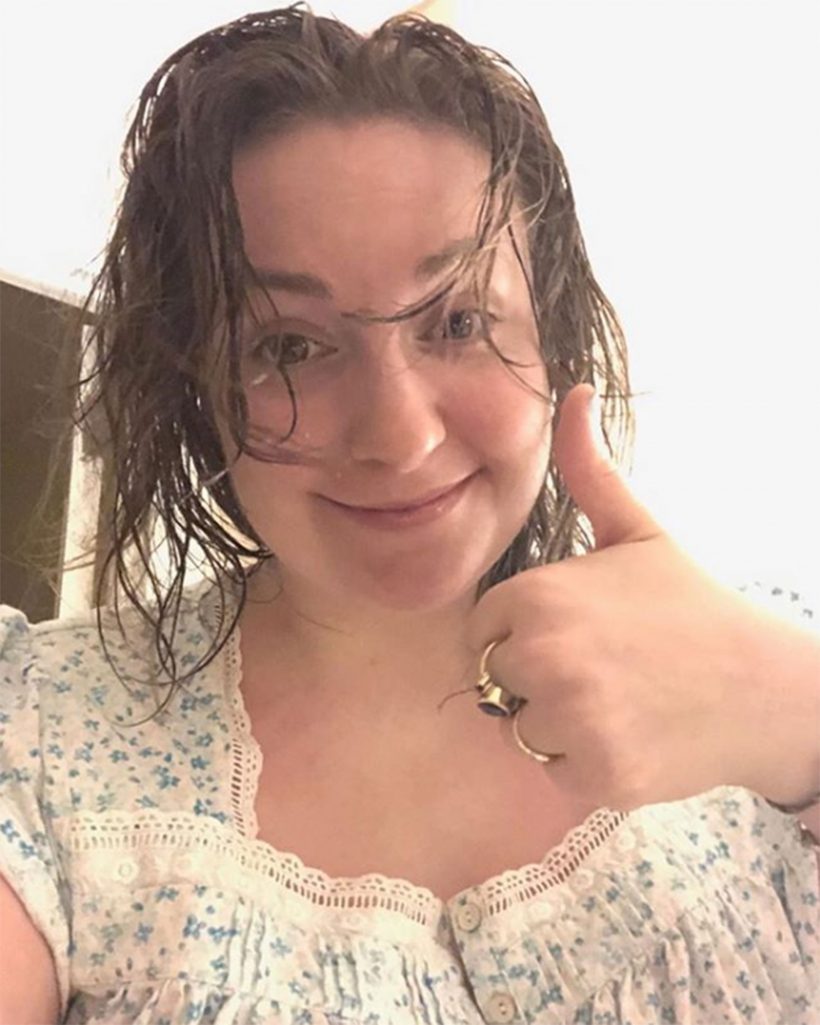 Lena Dunham is celebrating one year of sobriety.

The 32-year-old Girls creator and star revealed to her fans on Wednesday that although she “had an issue with drugs for a long time,” she is now 365 days sober.

“Today I’m in the miraculous position of being one year sober. I’ve done a lot of cool things in this life, but none has brought me the peace, joy and lasting connections that being part of a sober fellowship has (not even all girls camp. Sorry, Bunk Kingfisher.),” Dunham captioned a photo of herself giving a thumbs-up to the camera.

“Life is full of problems, but the cool thing about this one is that there is a solution: in every city, in many countries, you can find a group of people who are working hard to live sober, accountable lives and want to support you on your quest to do the same,” she continued.

Dunham, who previously admitted to using anti-anxiety medication Klonopin, said that she wasn’t aware of her dependency on “doctor prescribed” drugs while she was using.

And although Dunham is proud to celebrate her sobriety milestone, she admitted her world is not free of problems.

“Sobriety hasn’t fixed my world. Life is still challenging- that’s the nature of the game,” she wrote.

Instead, she’s embracing the ups and downs of life.

“But every day I am surprised by the richness and depth of, well, reality. I don’t need to escape this beautiful carnival. Instead, I’m on the ride,” said Dunham.

In conclusion, she encouraged others who might be struggling to seek help.

“Please remember you are never too far gone, too broken or too unique,” wrote Dunham. “There are people in plain sight waiting to help you. Let’s do this.”

Last fall, Dunham opened up about being six months sober — after quitting Klonopin, a type of Benzodiazepine used to treat symptoms of anxiety, panic disorders and seizures  — on an episode of Dax Shepard‘s podcast Armchair Expert.

“I’ve been sober for six months,” she said in October. “My particular passion was Klonopin.”

Dunham said she started taking the medication after her anxiety became so intense that it held her back from daily activities and hindered her work. “I was having crazy anxiety and having to show up for things that I didn’t feel equipped to show up for,” she explained. “But I know I need to do it, and when I take a Klonopin, I can do it.”

She said the drug made her “feel like the person I was supposed to be.”

“It was like suddenly I felt like the part of me that I knew was there was freed up to do her thing,” she continued.

“I didn’t have any trouble getting a doctor to tell me, ‘No you have serious anxiety issues, you should be taking this. This is how you should be existing,’ ” she said.

She said the dosage was increased after being diagnosed with post-traumatic stress disorder.

Later, Dunham said that while she’s had her “fair share of opioid experiences” due to her health issues, she didn’t realize just how hard it would be to quit.

“Nobody I know who are prescribed these medications is told, ‘By the way, when you try and get off this, it’s going to be like the most hellacious acid trip you’ve ever had where you’re f—– clutching the walls and the hair is blowing off your head and you can’t believe you found yourself in this situation,’ ” she said. “Now the literal smell of the inside of pill bottles makes me want to throw up.”