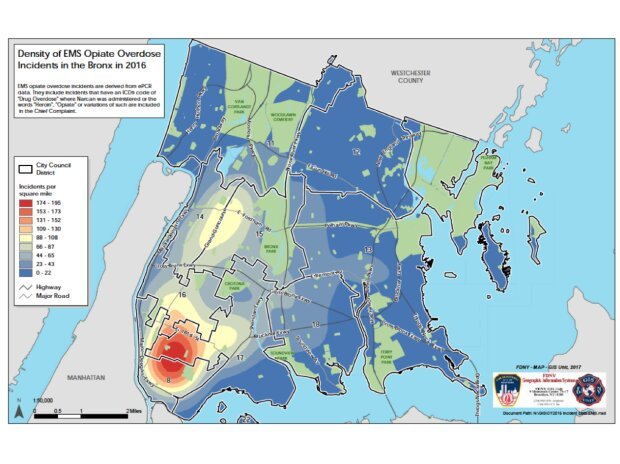 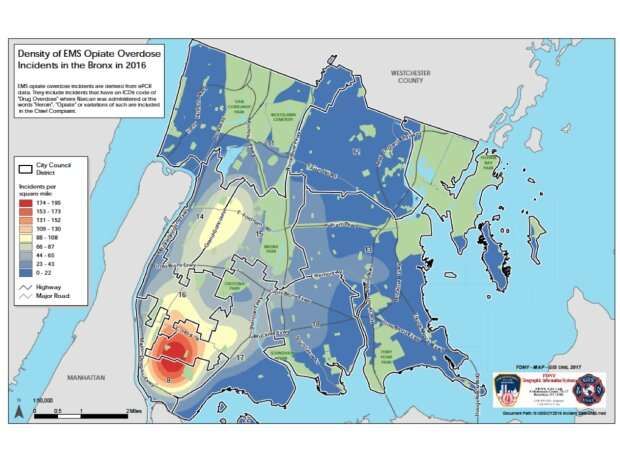 “Analyzing community maps with data from emergency response teams can help us to design interventions that have the potential to change the trajectory of the current opioid crisis,” said Donna Hallas, Ph.D., PPCNP-BC, CPNP, PMHS, FAANP, clinical professor and director of the pediatric nurse practitioner program at NYU Meyers. Hallas is the lead author of the study, which appears in the Journal of Pediatric Health Care.

The opioid crisis has devastated communities across the country, but overdoses vary by region and neighborhood. For instance, opioid overdoses in the Bronx are concentrated in the South Bronx, while the northern part of the borough has seen relatively few overdoses.

The Fire Department of New York (FDNY) and its emergency medical services (EMS) collect data that generate geospatial information system (GIS) maps for New York City’s five boroughs. These maps, which provide real-time awareness of issues including drug overdoses, enable the FDNY and EMS to identify locations of street-level drug use that may lead to lethal outcomes and to plan their daily strategies in the fight against opioid overdoses.

For this study, the FDNY shared its GIS maps with NYU Meyers researchers in order to develop an educational program for nurse practitioner (NP) preceptors who provide clinical educational experiences for NP students. This project is part of national efforts to improve interprofessional collaborations among traditional and nontraditional health care providers—for instance, primary care providers, EMS, and firefighters.

NP preceptors were educated on a variety of facets of the opioid crisis, including reviewing opioid-prescribing practices in community-based centers and recommendations for changing prescribing practices to control pain using alternative medications. The preceptors were also introduced to New York State Department of Health’s opioid data, which provide a high-level overview of long-term trends, including rates of overdoses at the borough/county level, naloxone administrations, and emergency room visits.

The state-level data were compared with the FDNY GIS maps, which contain a finer level of detail, including the number of opioid overdoses as well as other drug and alcohol incidents, with heat maps showing locations and concentrations of incidents. The researchers focused on maps of the Bronx and Brooklyn, where students were working in primary care settings, including school-based health centers, federally qualified health care centers, community-based clinics, and hospital settings.

“The importance of local GIS maps is that this information is available in real time so that interventions can be designed, evaluated, and changed quickly to meet the immediate needs of the community,” said Hallas.

The researchers found that the use of GIS maps did, in fact, better inform the care NP preceptors provided and the interactions about the opioid crisis they discussed with NP students, as measured by reviewing the students’ weekly clinical notes. The analysis of GIS maps led to consistent screenings for risk-taking behaviors in the adolescent and young adult populations, thanks to students’ timely awareness of community abuse issues.

These screenings resulted in an increase in interventions by students, including motivational interviewing and an evidence-based model called SBIRT: screening, brief intervention, and referral to substance use treatment.