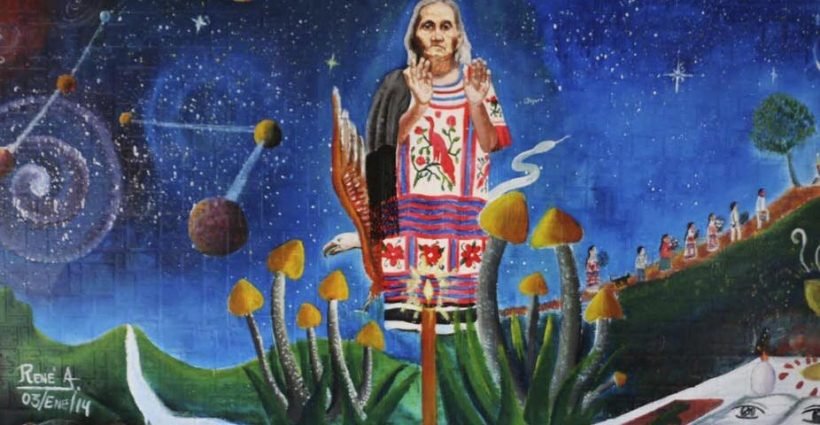 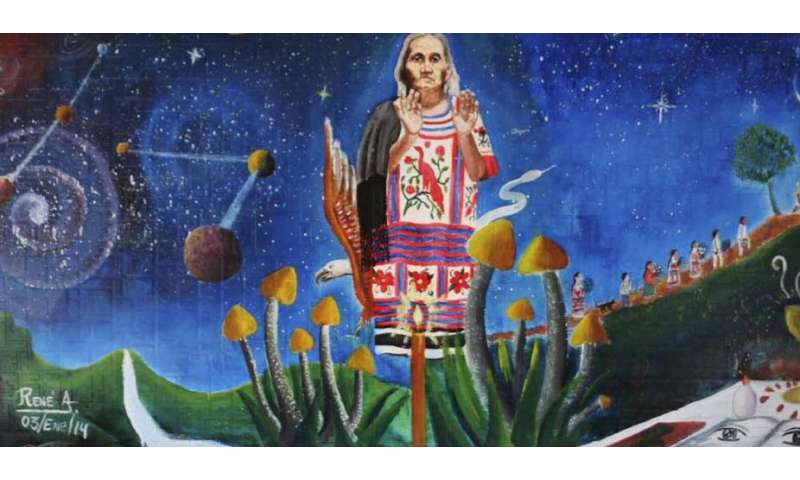 Before being qualified as “magic” and becoming the global phenomenon they are today, certain mushrooms were considered as sacred by the Mesoamerican peoples of Mexico. In the Nahuatl language the word teonanacatl, literally means “the flesh of God”. In the 16th century, with the conquest of Mexico and its colonisation by the Spaniards, the evangelising monks considered the mushrooms to be the work of the Devil. Over nearly 400 years, the ritual use of hallucinogenic mushrooms was thus systematically condemned… until it was discovered, in the 1950s, that the rites were still alive.

Today, in a few small villages of the central highlands of Mexico, the consumption of hallucinogenic mushrooms still survives. In the mountainous region of the Sierra Mazatec (located in the northern part of the state of Oaxaca), there are three species of hallucinogens that grow between June and September, during the rainy season.

The properties of all three species have led them to be described as medicina by the inhabitants of the Sierra Mazatec. To heal (mainly gout and fever), the sick can proceed in two ways. One is to consult a shaman who, ingesting the mushrooms, “sees” their patient’s ailment and thus predicts a prompt recovery or a slow death. Alternatively, patients can consume the mushrooms themselves, but must follow a strict process. For three days before and after ingesting the mushrooms, they must eat a meat- and bean-free diet and not have sexual intercourse. They must also walk the area’s mountains to acclimatise their body and relieve their mind from any daily concerns.

On the day of the ritual, the patient washes with clear water, dresses respectfully and waits for the sun to set before ingesting the mushrooms on an empty stomach. The healer checks that custom has been respected and finalises the process of purification (limpia) by burning herbs and the aromatic resin of the copal tree. The patient is then asked to explain what is – physically or psychologically – wrong. A chicken or turkey’s egg is subsequently rolled over his or her head, the body, the arms and legs while prayers are chanted. When the egg is broken, the healer assesses the patient’s state of health by reading its contents. Sometimes the process stops there, sometimes the shaman chooses to place 6 or 7 pairs of hallucinogenic mushrooms in a corn husk. Hallucinogenic mushrooms are always served in pairs as they are said to be “married” (casados). 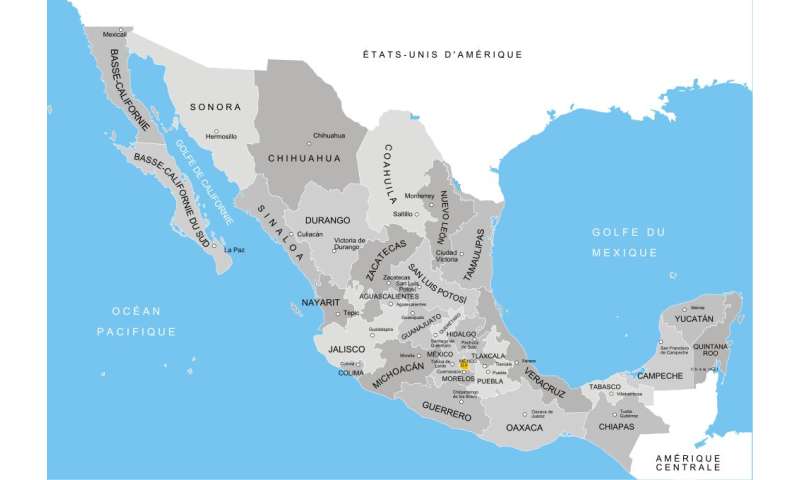 From scientific to psychedelic exploration

In the middle of the 1950s, three scientists explored together the Sierra Mazatec, by car and on horseback, in search of the lost mushrooms.

In 1953, Robert Gordon Wasson, a North American banker with a passion for mycology, was among the first to discover the continuance of the ritual use of hallucinogenic mushrooms among the Mazatecs. In the village of Huautla de Jímenez (in the state of Oaxaca, about 10 hours away from Mexico City), Wasson met the shaman María Sabina. Robert Heim, the renowned mycologist and professor for the National Museum of Natural History of Paris, was the scientific guarantor of the mission. The third, Guy Stresser-Péan, a connoisseur of indigenous languages and cultures, was their guide. Together, they launched into a vast multidisciplinary survey that mingled botanical, linguistic and ethnographic approaches.

On the other side of the world, in Paris, the eminent psychiatrist Jean Delay, head of the Institute of Psychology of the University of Paris, tested psilocin-based medication on patients with mental disorders. This road of enquiry lead to a documentary produced by Pierre Thévenard in 1963 and a mammoth piece of research, Les champignons hallucinogènes du Mexique. It was published in 1958 by the French Museum of Natural History. 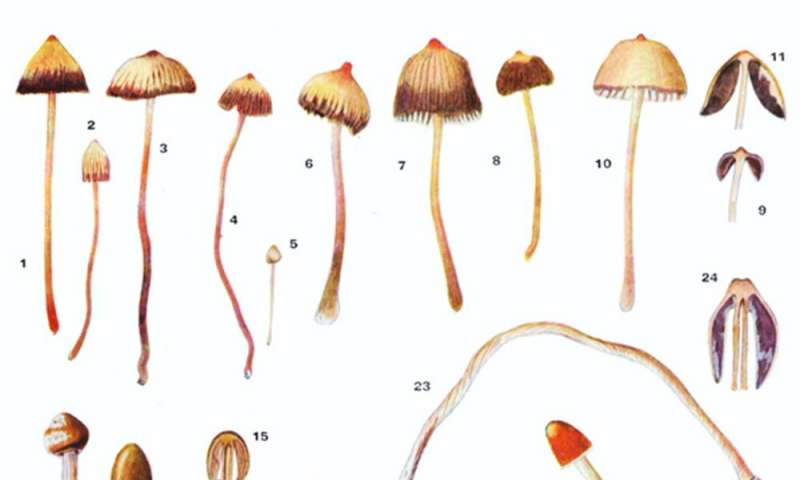 The scientific conclusions of these studies quickly spread beyond academia. Eager for new experiences, backpackers travelled the roads of the Sierra Madre in search of María Sabina. Touring Mexico even became an initiatory journey for any follower of the psychedelic vogue, including figures as diverse as John Lennon, Jim Harrison, Aldous Huxley and Walt Disney.

Travelling back in time

If the shaman is said to have the ability to heal and to see the future, the historian has the power to travel back in time. Let us therefore take a leap back several centuries to the aftermath of the Spanish colonisation of the Americas.

In Mexico, a few years after the Conquista, the Franciscan, Toribio de Benavente, known as Motolinía and famous for being a great defender of the Indians, offered information in his History of the Indians of New Spain. Published in Castilian in 1558, this work explains that certain mushrooms were eaten with honey, perhaps as a means of preserving the mushrooms and thus implying that they were transported and marketed.

Motolinía chronicles hellish visions supposedly experienced by the Indians who ingested them – threatening snakes, writhing worms escaping from their thighs, suicidal tendencies. Motolinía’s conclusion was that the sacred mushrooms were the work of the devil. Like many other native customs, the rituals related to the mushrooms were thus condemned and prohibited by the clergy. Consequently, they survived only in the deepest, most isolated villages of the Altiplano. Clearly, the mushrooms’ name, “the flesh of God”, their divinatory potentialities and their mode of consumption was too close to the Eucharist.

Yet the Christianisation of the indigenous masses never brought about the complete demise of the cult of the sacred mushrooms. Even today, they are locally known as the santos niños – sacred children. The continuance of their consumption denotes an incomplete and superficial acculturation.

What archaeology teaches us

The only formal traces left of the importance played by hallucinogenic mushrooms in the rituals, the pharmacopoeia and more generally in the worldviews of the Mesoamerican peoples, are known to us through archaeology. 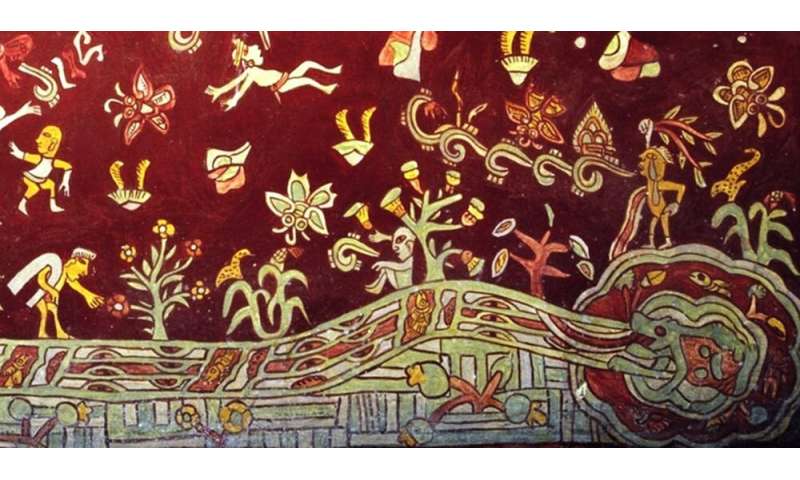 Near the pyramids of Teotihuacan, in the sumptuous residences of the megacity, archaeologists have uncovered frescoes dating back to the classical period (300-600 A.D.). The fresco of Tepantitla, reproduced in the Teotihuacan hall of the National Museum of Anthropology of Mexico, is a representation of the paradise of Tlaloc, the god of rain, provider of water and lush vegetation. His Eden, called Tlalocan, is populated and luxuriant.

On the fresco, from left to right, a man dressed in a white toga can be seen picking the flowers of a large, unidentified plant. Nearby is a corn plant, the very hallmark of Mesoamerican civilisation. In the centre of the image is a magnificent representation of Datura stramonium, known as jimson weed or devil’s grass in English. Dear to Carlos Castaneda, the plant has highly hallucinogenic effects that appear to be affecting the man sitting beneath. Next comes a cocoa tree, and in the bottom-right corner, on the shore of the lake that flows into the Tlaloc River, there are three mushrooms, associated with sea-shells. Above, a man is crying. A stream springs from his lungs – he has just perished from drowned. He is surrounded by butterflies representing the souls of the dead.

Other traces show that the use of mushrooms dates back to even earlier times. This is the case of more than 200 “stone mushrooms” found in Chiapas and Guatemala in Quiché and Mam lands. Some date from the older, pre-classical period, more than 3,000 years ago. About 30 centimetres high, the sculptures were first interpreted as being phallic representations before being identified as fungi. Their use remains uncertain, but they may have been used as pestles (molcajete) to grind corn, mushrooms or perhaps to sanctify food in general. They are most often associated with animals: jaguars, toads, or in the photo below: a rabbit and a coati. Are these individual figures representations of the nahualli (the animal doubles of human beings)?

Based on such issues, ethnobotanists such as Robert Gordon Wasson have offered bold readings of practices of ancient societies. Given the parallels between the consumption of agaric mushrooms by Siberian shamans and the Mesoamerican cults of teonanacatl, it has been suggested that the knowledge of psychotropic mushrooms goes back to the first settlements of the American continent and that their hallucinatory effects could be at the root of the continent’s religious practices. 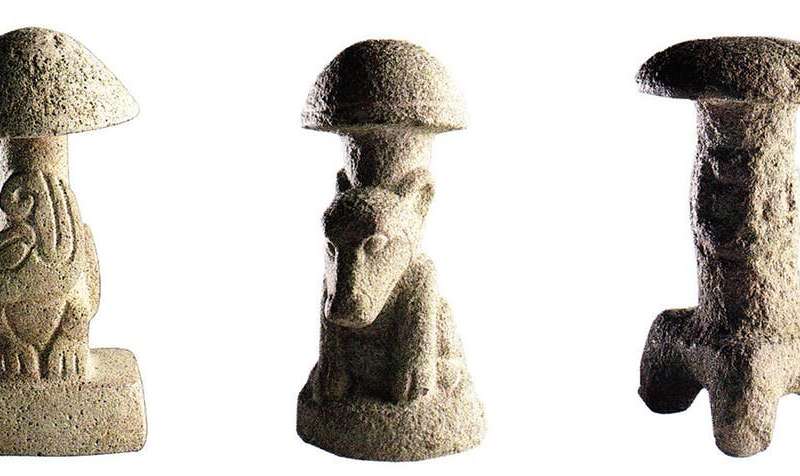