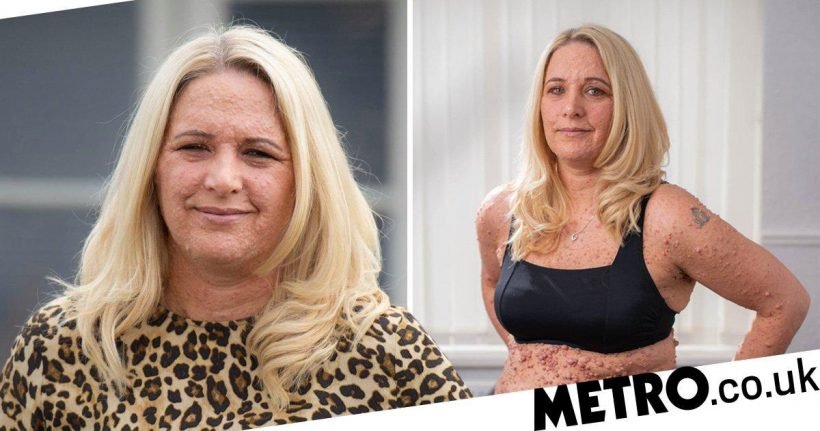 ‘They didn’t know it either as part of it was in secret, so they were shocked when I went in the hot tub with a bikini top.

‘I am able to not be as conscious about what I wear and not care as much what others think and be more comfortable in my own skin.

Mum of four Rachael inherited NR1 from her dad, who also experienced lumps on his body.

At 13, lesions started to appear on her stomach, arms, and legs, and the condition worsened with each of Rachael’s pregnancies.

Her condition attracted cruel taunts in the street from strangers who said she looked like she’d been bitten by a crocodile.

Rachael’s self-esteem was so low that she thought she would never meet a partner who could love her the way she was.

But in 2003 she reconnected with an old friend, Mike. They fell in love and tied the knot in April 2013, now sharing a home in Yorkshire with their four children.

Rachael has undergone painful surgeries and laser treatment to remove the lumps on her body, but she knows that her neurofibromatosis will likely worsen as she gets older, and there’s no cure.

Thankfully she’s now able to accept her body the way it is, and refuses to hide on her upcoming holiday.

‘I hope to be able to get out there and wear a bikini, because I’m always covered up, regardless of what people think,’ says Rachael. ‘It’s my holiday, not theirs.’

MORE: Baby born with a rare disorder becomes a model

MORE: You Don’t Look Sick: ‘I get told to take the stairs because I look healthy but I have stage four cancer’