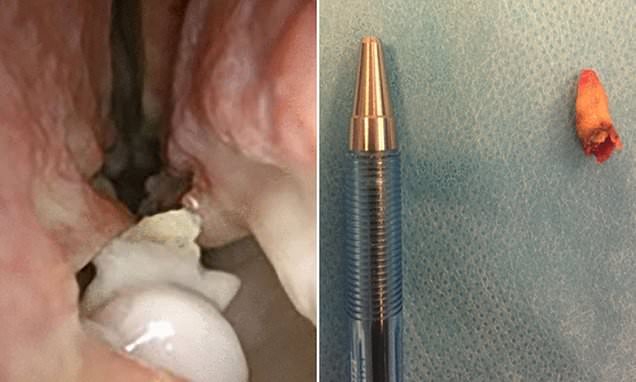 The man with a TOOTH growing in his nostril: ‘Rare’ condition left the 59-year-old with a blocked nose for 2 years

A 59-year-old man had a tooth growing in his nostril because of a rare condition which left him with a blocked nose for two years.

The strange growth, called an intranasal retained tooth, can be caused by physical damage or development problems but doctors couldn’t explain this case.

After doing scans and investigations to try and work out what the growth was, doctors removed it during surgery and discovered it was an entire tooth. 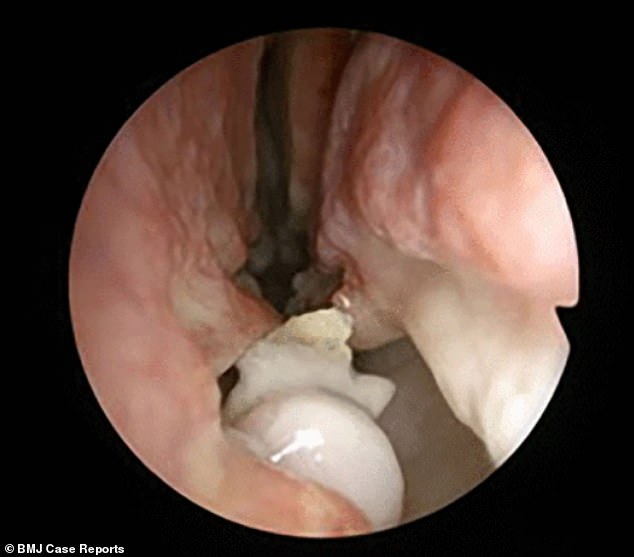 When the unnamed man visited doctors to complain about a blockage in his nose and regular discharge, medics found a pearly white tooth growing into his nostril (pictured)

Growing a tooth in the nostril is rare and thought to affect somewhere between 0.1 per cent and one per cent of the population but can go unnoticed.

The report was published in the journal BMJ Case Reports and included pictures which clearly show a pearly white tooth inside the unnamed man’s nose.

Experts said they could only find 23 incidences of the odd condition recorded in medical journals between between 1959 and 2008.

The man, who saw doctors at the Ear, Nose and Throat unit at University Hospital Aarhus, had been suffering from a blocked nose and loss of sense of smell over the past couple of years.

He had also had a regular milky discharge, particularly coming from the left nostril.

After topical nasal steroids – sprays to reduce swelling – had failed to solve his problems after a month, he saw a doctor.

‘It can easily be missed’, the doctors, led by Dr Milos Fuglsang, wrote. ‘Diagnosis is important since it potentially can cause [disease].’

A scan revealed the man’s nose was crooked to one side and there was a mass growing in his nasal cavity.

Doctors suspected it was a cyst or even a tumour, and decided to operate and pull the growth out.

Previous case reports have described this condition happening when normal teeth are displaced after facial trauma, infections or developmental problems such as cleft palates. 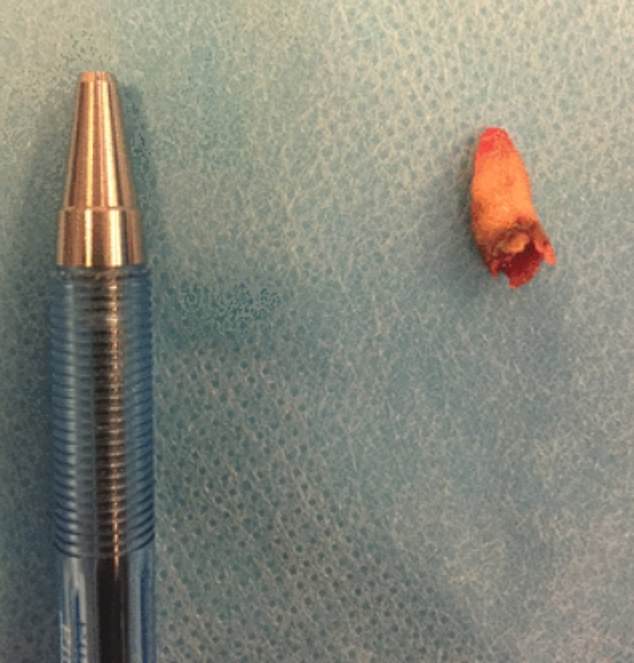 A 59-year-old man had a tooth growing in his nose in an extremely rare condition that left him with a blocked nose for two years. When a tumour was removed from his sinuses and sent for investigations, it was revealed there was a tooth inside (pictured)

They found the man had broken his jaw and nose when he was younger, which had needed surgery to reconstruct, but they couldn’t find any link between the two incidents.

The doctors added: ‘Our patient most likely had the intranasal retained tooth most of his life, but had late onset of symptoms.’

The patient was fine within a month after he used nasal saline irrigation and ten days of antibiotics.

‘Intranasal teeth are a rare finding but important to recognise since nasal congestion, chronic discharge and hyposmia can decrease quality of life,’ the report concluded.