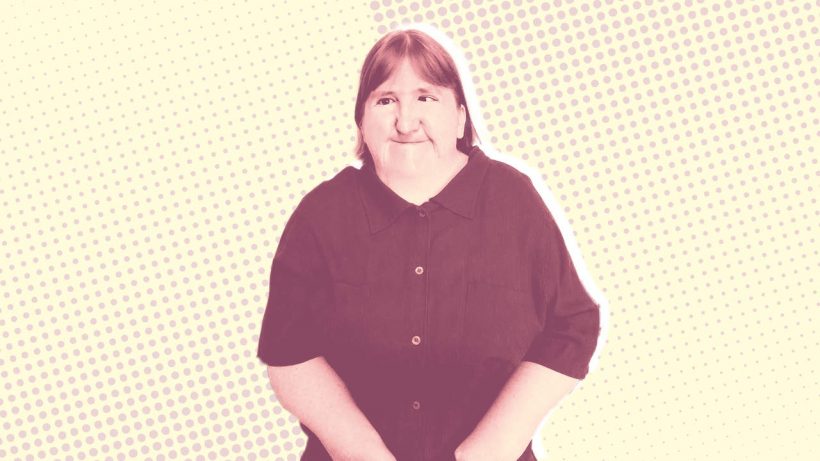 Nearly a month ago, I went viral on Twitter simply for posting photos of myself. I wasn’t nude or threatening violence—I was just sharing selfies. Sure, I had ulterior motives, but I never expected the response: a tweet that racked up more than 300,000 likes, and countless comments and retweets.

See, a few weeks before the selfie explosion, I had written an op-ed for CNN titled “What If We All Unfollowed Trump on Twitter?” The point of the piece was to urge others not to give the president an audience for his racism, homophobia, misogyny, and ableism—something I firmly believe in. But when a conservative YouTube personality mentioned my op-ed during a segment on his YouTube show, I made one big mistake: I read the comments. People I had never met in real life called me “fat,” “ugly,” and wrote that I looked like a “blob fish” and a “potato with a face.” But one thing particularly irked me: a quote by a YouTube commenter that read, "Melissa Blake should be banned from posting pictures of herself."

So what did I do? I posted three photos, all selfies taken on the same day—and they blew up the internet. My goal: give anyone who's been bullied or dealt with disability a voice. My weapon: my face.

I was born with Freeman-Sheldon syndrome (FSS), an extremely rare genetic bone and muscular disorder—so rare that its exact prevalence is unknown, per the National Institutes of Health’s Genetic Home Reference.

There wasn’t much prenatal testing back in 1981, so my parents had no idea I’d be born this way. The key characteristics of FSS are: joint deformities in the hands, feet, and knees; deep folds of skin between the nose and the lips, and a small, pursed mouth (there's even an informal name for that one: “whistling face”).

I like to affectionately call the first 15 years of my life “The Hospital Years,” because sometimes, if not most of the time, the hospital felt more like home than my actual home. During that timeframe, I had more than 26 surgeries; many of which were to correct joint contractures (aka, deformations) in my knees, hands, and hips. Other surgeries were to correct my scoliosis through a spinal fusion after my spine grew up into my brain stem, and another 13-hour surgery to stop by spine from compressing my brain stem. (I had to wear a halo brace for two months after that while everything healed.)

But, if I’m being honest, I don’t look back on that time period with sadness—it was all part of my life. There's this one photo of me at age 15, after my last surgery, that sums up how I felt about growing up with FSS. In this picture, I’m smiling for the camera, just days before I was about to start high school. What other people might notice about this picture however, is not my excitement and happiness, but rather the huge brace, called an Ilizarov frame, on my leg. An Ilizarov frame is a ring-like metal brace that’s connected to the leg through a series of pins inserted into bones. It was meant to straighten my leg while also holding it into place. It was quite the process, but nothing that got me down. I’ve never thought of FSS as something that happened to me; it’s simply part of who I am.

Still, I had to learn the hard way that my life wasn’t “normal” compared to other kids’ lives. While my peers were learning in the classroom and on the playground, I had become a pro at navigating the medical world (or at least my medical world). I even memorized the layout of my Chicago-based hospital during my post-surgery walks with my mom—the huge window on the ninth floor with picturesque scenes of the city; the long tunnel-like hallway that made you feel like you were in an action movie; the bright yellow paint job on the children's floor.

While I certainly felt different most of the time, I wasn’t really treated that way—I didn’t experience much bullying in real life. That, of course, changed when I became a freelance writer with a presence on social media. Before the Trump fiasco, I mostly ignored the social media taunts—the “dude bros” who didn’t have anything better to do than mock my thoughts and appearance. But, for some reason, this particularly cruel round of cyberbullying made me rethink things—especially how I see myself.

I tried so hard, for so long, to be a confident person, both on the internet and in real life, but seeing words like ugly and fat over and over gets to you. Those words have a way of swimming around in your head and it’s hard to get them out, even when you want to let them sink. Deep down I knew those words weren’t true, but I couldn’t help but let them keep floating in my brain.

But then, I thought more about those negative comments said about me on YouTube—especially the one that said I should be banned from posting photos, and something clicked. I realized that I do deserve to be seen, and that there's power in owning who you are. I couldn’t stay silent this time, so I responded with my trilogy of selfies—basically doing the exact opposite of what they asked me to. It was a defiant move, for sure, but I also saw it as a celebration. A celebration of who I am. A celebration of my disability.

Breaking news: I’d just like to announce that it’s officially sweater weather season!! And you know I’m looking forward to spending my days all cozy chic in this pink ensemble… ???? #MyBestSelfie

Posting those photos—and going up against my cyberbullies—turned out to be more empowering than I could’ve imagined. All the praise helped me see that people were listening and understanding what I was trying to say. It was validation after doubting myself and it made me realize that maybe the world was starting to see disabilities in a more accurate way.

That’s all I really hope for: that young people with disabilities will see my tweet and feel that same sense of pride in themselves and celebrate everything they are. It took me years to find that sense of pride in myself, but I’m so grateful that I’ve finally found it.

Melissa Blake is a freelance writer whose work has appeared in Cosmopolitan, The New York Times, and CNN. To learn more, visit her blog, So About What I Said, follow her on Instagram @melissablake81, or find her on Twitter @melissablake.

To get more stories like this delivered to your inbox, sign up for the Real Wellness WomenIRL newsletter