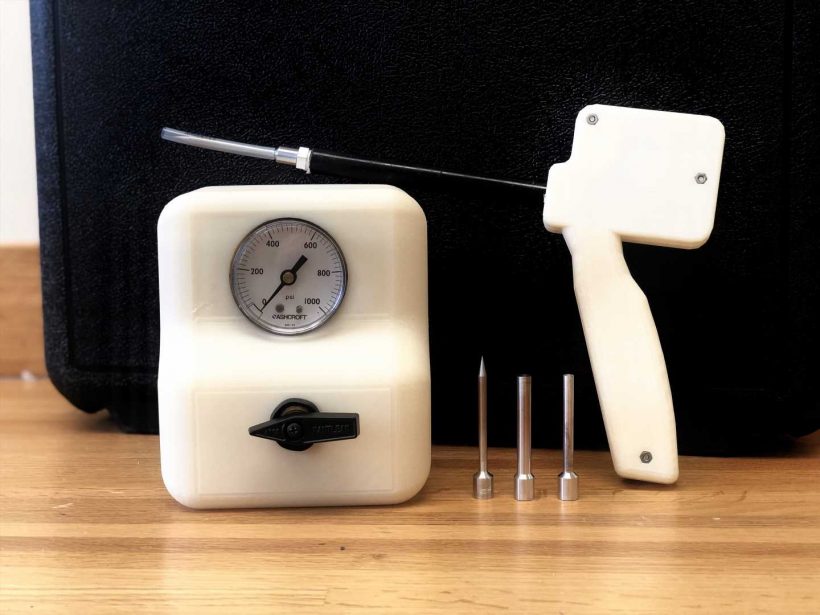 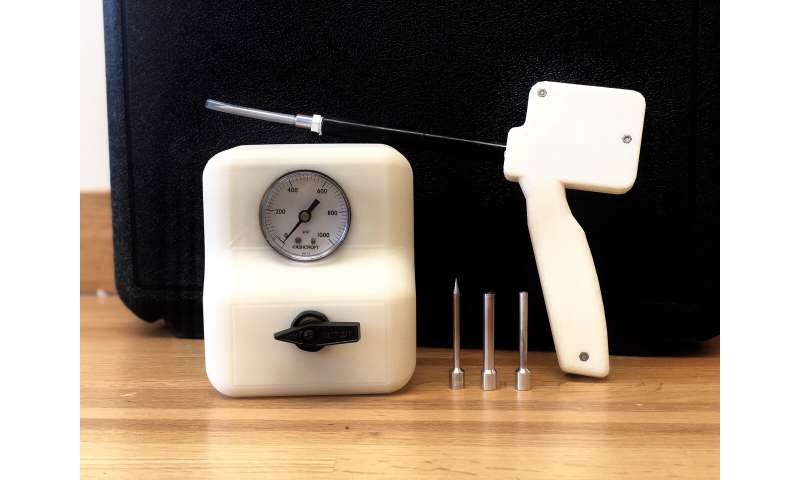 A new reusable device created by the Johns Hopkins University can help women with breast cancer in lower income countries by using carbon dioxide, a widely available and affordable gas, to power a cancer tissue-freezing probe instead of industry-standard argon.

A study detailing the tool’s success in animals was published this month in PLOS One.

“Innovation in cancer care doesn’t always mean you have to create an entirely new treatment, sometimes it means radically innovating on proven therapies such that they’re redesigned to be accessible to the majority of the world’s population,” says Bailey Surtees, a recent Johns Hopkins University biomedical engineering graduate and the study’s first author.

“This project is a remarkable example of success from the Biomedical Engineering Design Program,” says Nicholas Durr, an Assistant Professor of Biomedical Engineering at Johns Hopkins and the study’s senior author. “This team of undergraduates has been so successful because they created a practical solution for the problem after really understanding the constraints that needed to be met to be impactful.”

The largest cause of cancer-related mortality for women across the globe, breast cancer disproportionately affects women in lower-income countries due to lack of treatment. While the survival rate for women in the United States is greater than 90%, they are significantly lower at 64%, 46% and 12% in Saudi Arabia, Uganda and The Gambia, respectively.

“Instead of saying ‘She has breast cancer,” the locals we met while conducting focus groups for our research said ‘She has death,’ because breast cancer is often considered an automatic death sentence in these communities,” adds Surtees.

In lower-income countries, the main barriers to treating breast cancer are inadequate treatment options—with surgery, chemotherapy and radiation being impractical or too expensive—and long travel times to regional hospitals where efficient treatment is available. Even if a woman is able to travel to a hospital for treatment, she may not be seen and recovery times will keep her out of work for an additional few weeks.

Killing cancerous tissue with cold, or cryoablation, is preferable to surgically removing tumors in these countries because it eliminates the need for a sterile operating room and anesthesia, thus making it possible to local clinics to perform the procedure. It’s also minimally invasive, thereby reducing complications such as pain, bleeding and extended recovery time.

Current cryoablation technologies, however, are too expensive, with a single treatment costing upwards of $10,000, and are dependent on argon gas, which typically isn’t available in lower-income countries, to form the tissue-killing ice crystals.

With these barriers in mind, the student-led research team, named Kubanda (which means “cold” in Zulu), wanted to create a tissue-freezing tool that uses carbon dioxide, which is already widely available in most rural areas thanks to the popularity of carbonated drinks.

The research team tested their tool in three experiments to ensure it could remain cold enough in conditions similar to the human breast and successfully kill tumor tissue.

In the first experiment, the team used the tool on jars of ultrasound gel, which thermodynamically mimics human breast tissue, to determine whether it could successfully reach standard freezing temperatures killing tissue and form consistent iceballs. In all trials, the device formed large enough iceballs and reached temperatures below -40 degrees Celsius, which meets standard freezing temperatures for tissue death for similar devices in the United States.

For the second experiment, the team treated 9 rats with 10 mammary tumors. Afterwards, they looked at the tissue under a microscope and confirmed that the tool successfully killed 85% or more tissue for all tumors.

Finally, the team tested the tool’s ability to reach temperatures cold enough for tissue destruction in the normal liver of a pig, which has a temperature similar to a human breast. The device was successfully able to stay cold enough during the entire experiment to kill the target tissue.

“When we started the project, experts in the area told us it was impossible to ablate meaningful tissue volumes with carbon dioxide. This mindset may have come from both the momentum of the field and also from not thinking about the importance of driving down the cost of this treatment,” says Durr.

While the results are promising, the device still requires additional experiments before it’s ready for commercial use. Mainly, the research team’s next steps are to ensure it can consistently kill cancer tissue under the same heat conditions as human breast tissue.