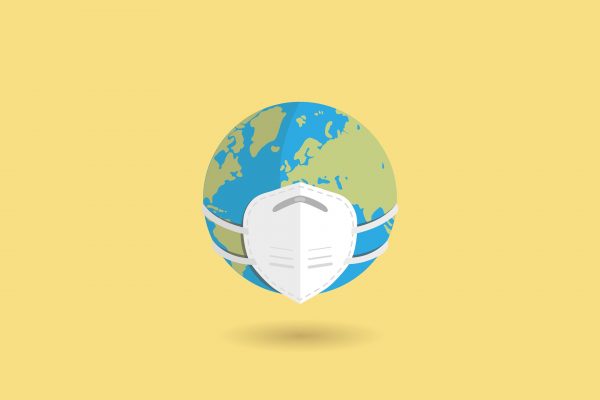 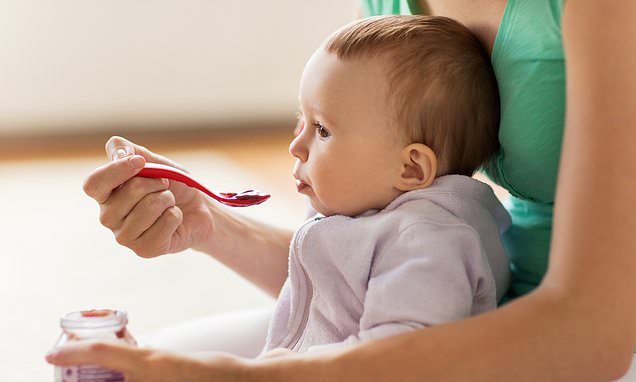 The World Health Organisation has called for a ban on added sugar in baby food and warned against ‘misleading’ health claims on labels.

Analysis of thousands of baby products in Europe, such as pouches and jars, revealed high levels of sugar across the board, even in savoury products.

It could cause baby teeth to rot and increase the risk of obesity and related diseases by giving the child a ‘sweet tooth’, the WHO warned.

Even though some sugars are naturally present in fruits and vegetables, it’s a ’cause of concern’ that more is added, a report said.

The organisation is one of many which have recently urged a wipe-out of added sugars and sweeteners in foods for children under three years of age. 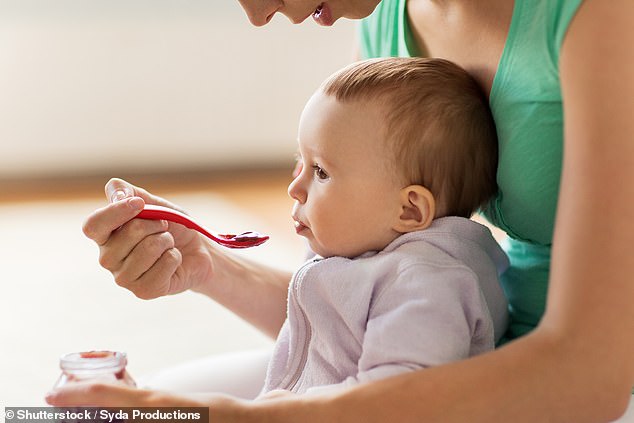 The WHO examined nearly 8,000 products from more than 500 stores in Austria, Bulgaria, Israel and Hungary between November 2017 and January 2018.

More than 30 per cent of calories in half of the products came from total sugars, while around a third contained added sugar – which are those that aren’t natural.

The report said: ‘Sugar, fruit juice, concentrated fruit juice and other sweetening agents should not be added to foods for infants and young children.’

A separate analysis by WHO Europe of items on sale in the UK, Denmark and Spain in 2016-17 showed that baby foods generally complied with guidance on salt, protein, fat and carbohydrate.

But sugars accounted for 70 per cent of the food calories in fruit purees, reaching almost 100 per cent in some blended fruit products.

HOW MUCH SUGAR IS TOO MUCH?

The amount of sugar a person should eat in a day depends on how old they are.

Children aged four to six years old should be limited to a maximum of 19g per day.

Seven to 10-year-olds should have no more than 24g, and children aged 11 and over should have 30g or less.

Popular snacks contain a surprising amount of sugar and even a single can of Coca Cola (35g of sugar) or one Mars bar (33g) contains more than the maximum amount of sugar a child should have over a whole day.

A bowl of Frosties contains 24g of sugar, meaning a 10-year-old who has Frosties for breakfast has probably reached their limit for the day before they even leave the house.

Children who eat too much sugar risk damaging their teeth, putting on fat and becoming overweight, and getting type 2 diabetes which increases the risk of heart disease and cancer.

These fruit purees are also added to savoury products, and should be acknowledged as ‘added sugars’, the WHO said.

The UK Government’s Scientific Advisory Committee on Nutrition (SACN) recommends added sugars make up a maximum of five per cent of a child’s daily energy intake. And this proportion should be even lower for toddlers under the age of two.

The WHO noted that while foods that naturally contain sugars, such as fruits and vegetables, can be appropriate in young child diets, ‘the very high levels of sugars present in commercial products is a cause for concern’.

The WHO said there is a dangerous ‘halo effect’ around baby products that a parent would reasonably assume them to be nutritious.

Nearly all product labels carried some kind of statement about the product’s nutritional (at least a third) or health-related properties (up to 35 per cent), which goes against guidelines.

The report said: ‘Careful thought is needed on how to inform parents or caregivers about these issues in a clear and understandable way while encouraging food manufacturers to reformulate their products.’

Up to 60 per cent of inspected food products were labelled as suitable for infants under six months old, contrary to WHO recommendations ‘that infants receive exclusively breast milk for the first six months of life’, said the report.

The WHO wants to ban the promotion of breast milk substitutes to encourage children between six months and two years be fed nutrient-rich foods prepared at home.

Labels such as ‘no added sugar’, ‘organic’ or ‘preservative free’ trick parents into thinking a product is healthy, it said.

‘No added sugar’, for example, doesn’t actually reveal anything about how much sugar is in something – it may still contain a huge amount of fructose from fruit.

PHE said around one in five toddlers are overweight or obese in England and one in eight have visible tooth decay.

The body said convenient ready-made foods, made by big-name brands such as Ella’s Kitchen, Heinz and Cow & Gate, may be fuelling the problem.

The products can contain almost 10g of sugar in a single packet – more than half of a baby’s daily allowance.

In a report in June 2019, the RCPCH also warned that the pouches are being used at the expense of children becoming familiar with more sour-tasting vegetables. 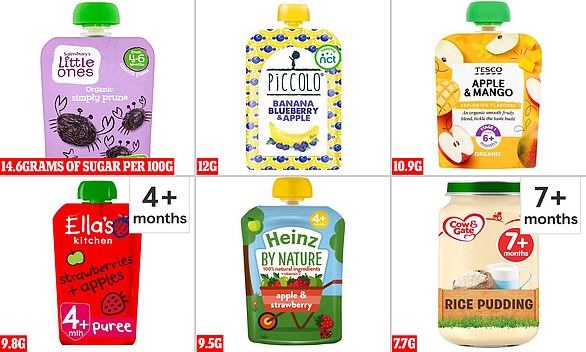 Growing numbers of children are overweight – around 30 per cent of them, with 17 per cent rated as obese – and much of this is blamed on high-sugar diets

Parents should instead encourage children to eat more savoury foods and explore different tastes such as bitter spinach and broccoli, the RCPCH said.

Professor Mary Fewtrell, of the RCPCH, said: ‘Family life is busier now than ever before, so jars and pouches prove popular with parents because they are so convenient.

‘We therefore want to see the Government introduce mandatory guidelines on how much free sugar they can contain.

‘We also think there should be more investment in public health education to advise parents on the impact of free sugars.

‘For parents making their own baby food, we’d encourage them to balance the sweeter tastes with more bitter ones.’