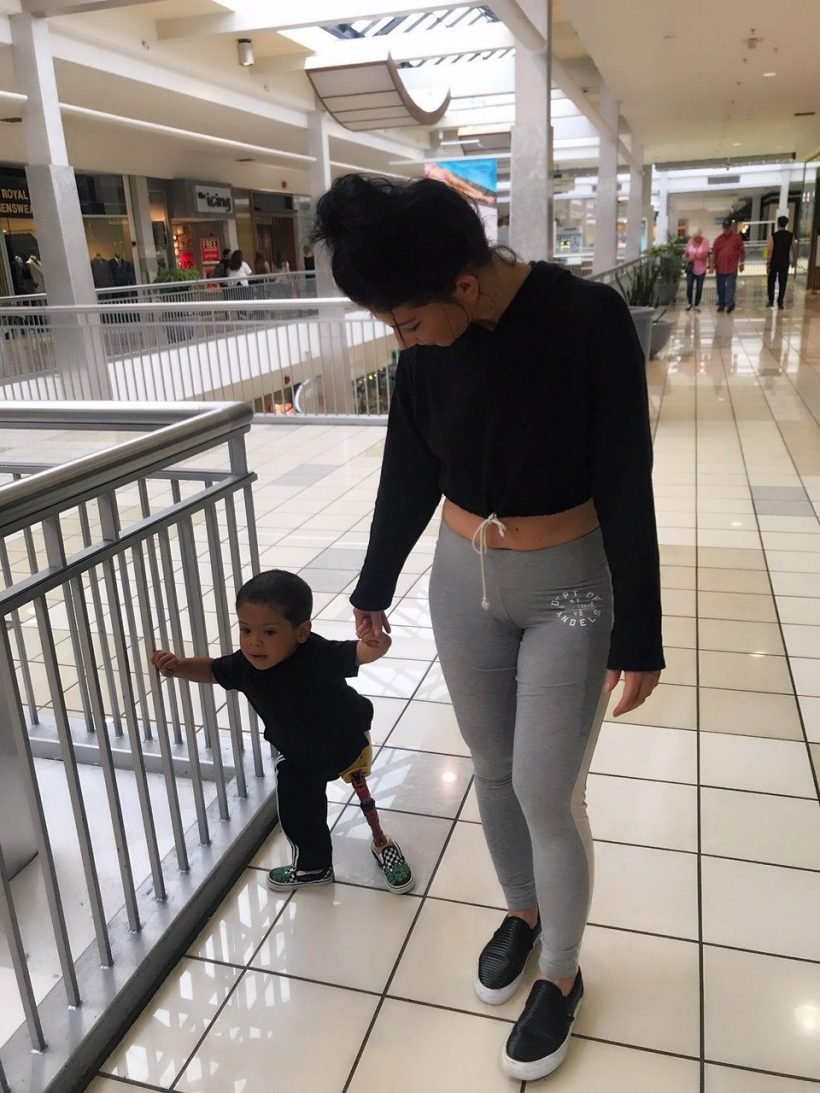 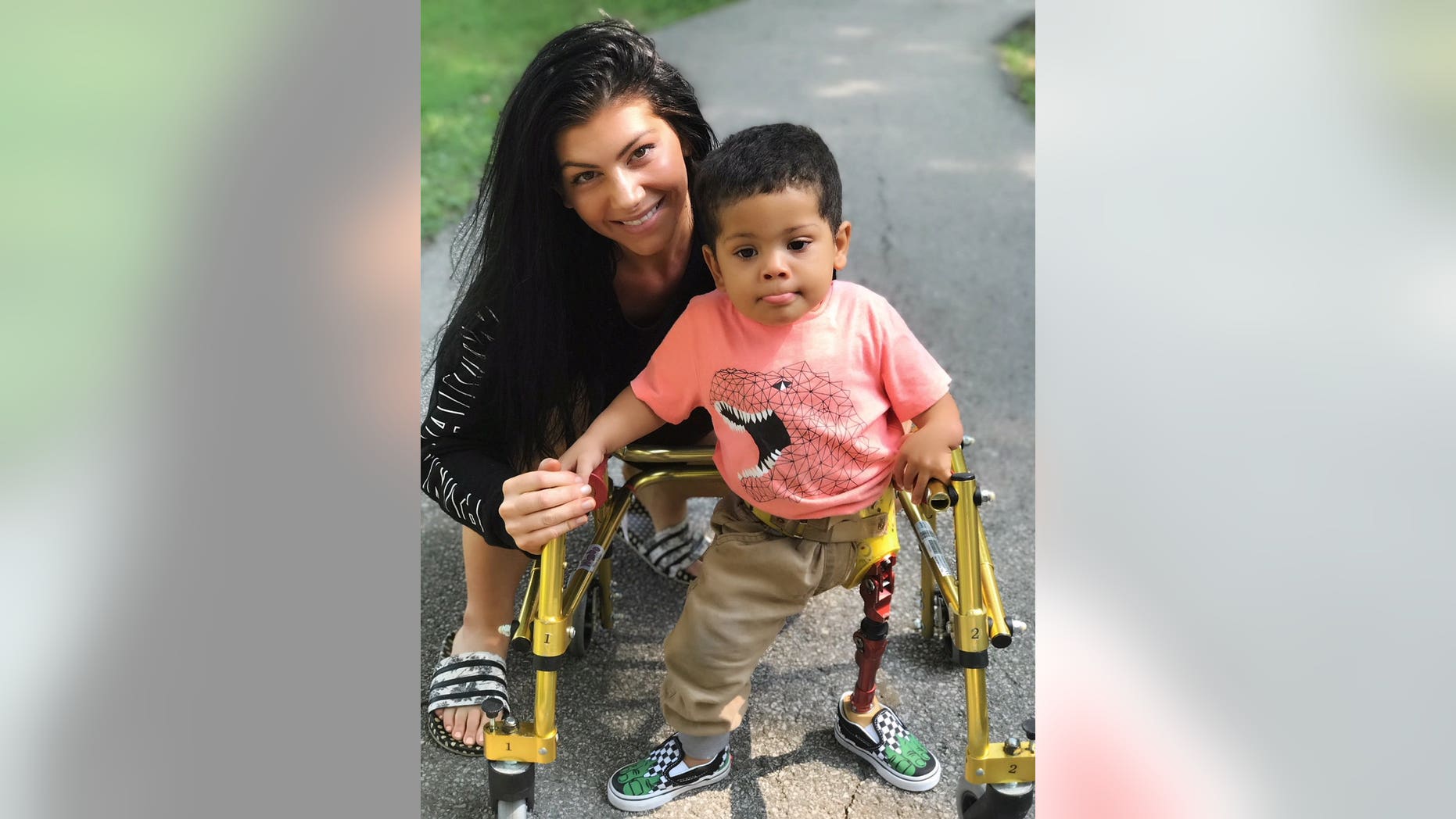 “The theft was so upsetting," said Josiah’s mother Brie, 30. "He relies on the prosthetic for his independence and mobility and to take that away from somebody is just crappy."
(SWNS)

A toddler whose $10,000 prosthetic leg was stolen will soon be walking again thanks to the support of doctors and his community.

Three-year-old Josiah Rainey has vacterl syndrome, a rare birth defect that caused him to be born without his left leg. He relies on a prosthetic — which is covered in Minions stickers — to get around, but it was stolen from his mother's car while parked outside their home.

“The theft was so upsetting," said Josiah's mother Brie, 30. "He relies on the prosthetic for his independence and mobility and to take that away from somebody is just crappy." 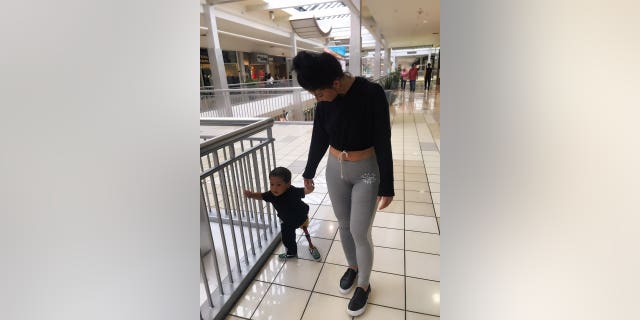 Three-year-old Josiah Rainey has vacterl syndrome, a rare birth defect that caused him to be born without his left leg.
(SWNS)

When news got out about the theft, the doctors at Shriners Hospital for Children in St Louis, Ill., which has treated Josiah for two years, offered to donate a new limb. And on top of that, a GoFundMe campaign has raised enough funds to buy a much-needed wheelchair.

“We had an overwhelming response from the community and it is wonderful that such good has come out of this,” said Brie.

Brie, who runs her own health and wellness company, discovered the theft on March 1 as she got into her car at the start of the school run. She had left the vehicle unlocked the night before because her daughter Aaliyah, 4, had fallen asleep in the back, and she had to carry her inside.

“I don’t usually leave the car unlocked," said Brie, of Belleville. “The night before my daughter fell asleep in the car and I carried her inside. I forgot to go back for my stuff and lock the car. When I opened the door in the morning, there was stuff scattered all over my seat and I quickly cleaned it up.

“At first I blamed my husband or my kids, but then I couldn’t find my wallet. I realised that Josiah’s backpack was gone and inside his backpack was his leg," she said. “I was instantly devastated but I had zero time to process it. I had to get the kids to school and I had to cancel my credit cards.”

Brie reported the theft to the police and asked friends and family to spread the word about the prosthetic leg in the hope that the thieves would hand it in. Her parents, Karen, 54, and Keith Stephens, 55, even hunted in dumpsters for the prosthetic but were unable to find it.

Luckily Josiah, who has worn a prosthetic leg since he was one, was not distressed by the theft.

“He doesn’t understand what happened because he can’t speak because of developmental problems,” Brie said. “It’s a blessing that he doesn’t know what’s going on and he doesn’t have to stress about it.

Brie further explained that Josiah wears the prosthetic every day, getting his first at the age of 1. His current leg had been covered in Minions stickers.

“We have been working with a physical therapist every week to help him walk," said Brie. “He loves to crawl and go as fast as possible and he loves walking in the park, climbing ladders and steps. He was walking better than ever.”

After the theft, Shriners Hospital for Children in St Louis, Illinois, which has treated Josiah for two years, offered to donate a limb to Josiah. And on Monday, doctors made a cast of his leg. 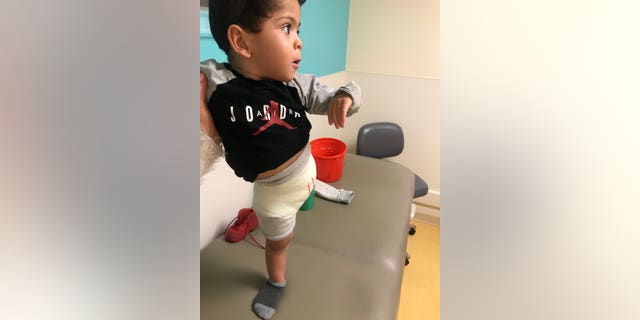 Josiah is currently getting ready for a new prosthetic.
(SWNS)

They hope the limb will be ready in just one week, even though the usual process can take up to four months.

“They are actually rushing the process so he won’t go that long without a leg,” said Brie.

An acquaintance also set up a GoFundMe to raise funds for a wheelchair for Josiah after Brie’s insurance declined to cover it.

Brie, who is married to store manager Craig, 30, said that Josiah has maintained his positive attitude throughout the ordeal. 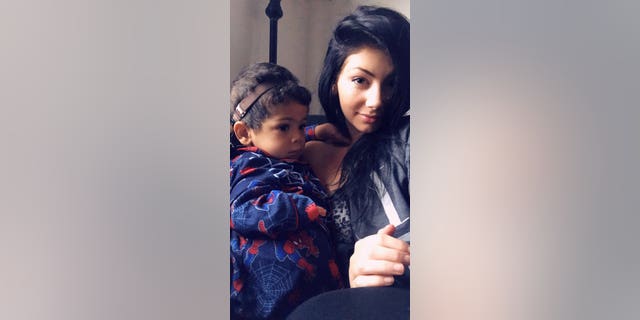 “They are actually rushing the process so he won’t go that long without a leg,” Josiah’s mother said of the hospital’s efforts.
(SWNS)

“He takes everything in his stride," she said. “He is so happy, regardless of what he has been through.

“It hasn’t affected him at all. As soon as he gets his new leg, he’ll be right back at it.”