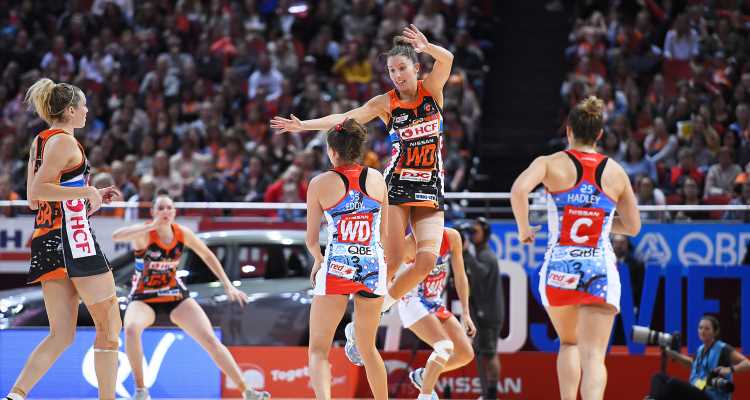 While we’re missing the matches from the sidelines and our screens, the importance of supporting women in sport has not lost its significance. This is especially the case for up and coming female athletes – a cause rebel believes and truly backs with its powerful Women Mentor Program.

This initiative supports the needs of young female athletes in their first few years of professional play across codes including AFLW, Suncorp Super Netball, NRLW, WBBL and W-League. Offering a range of critical content and connections in areas such as mindset, media and mentoring, the rebel resource is one these rising stars are immensely grateful for.

In this year’s crop of incredible talent is W-League’s Shay Evans, AFLW’s Hayley Miller, WBBL’s Hannah Darlington, Super Netball’s Amy Parmenter and the NRLW’s Millie Boyle. With the support of rebel, these women are slaying their respective sports and will be for seasons to come. We spoke to some of the mentees in this year’s program about their most invaluable supporters and inspirations.

Amy describes her debut season with the GIANTS “the best year of my whole life.” After two years in the team’s training partner program, Amy took her first on-court opportunity with both hands smashing expectations with her relentless performance. She was rewarded with selection in Netball Australia’s Development Squad and was also voted the GIANTS Members’ Player of the Year.

Amy’s early career has followed a similar trajectory to her mentor and rebel ambassador Laura Geitz’s – coming later to the game at 13 years old – and she’s hoping that continues.

“I first met Laura Geitz when I was 14 or 15,” Amy says, “Out of the blue she called me. I was going through some pretty tough stuff and she had been through a similar thing. She really left an impression on me that day.”

“Laura and another netballer, Gabi Simpson, were both incredible role models for me, and still are to this day. They showed me that netball was about more than just the player you are on the court. They both went out of their way to help me navigate through my underage netball pathway. And to this day, they continue to inspire me to be a part of the wider netball community and look after the girls coming through after me, because I know how much of a difference it can make.”

She says rebels’ support has also been invaluable.

At only 18 years old, this young gun is already making her mark on the game, and is a natural fit for rebel’s Women Mentor Program. Since her debut – on the same day she sat her year 12 English exam BTW – Hannah’s clocked up a bowling economy rate of 6.82 and finished the latest WBBL season as her team’s leading wicket taker. Aside from prodigious skill, the pace-bowling all-rounder also shows immense leadership potential fostered by Thunder veterans like Alex Blackwell. This is something Hannah is hugely appreciative of.

“When I was younger I didn’t have many role models, you can’t be what you can’t see, but now I’ve gone into the cricket world I’ve really looked up to Alex Blackwell,” Hannah says. “She was the captain at the Thunder for a long time and I was lucky enough to do a lot of work with her around leadership, she’s retired this year and I think it’s a perfect time to come in the game.”

Hannah says the rebel Women Mentor Program has been particularly helpful in developing her off field skills and connections.

“The connection we get to have with other codes as well allowed me to understand how they have become standouts in their fields and how I can translate some of this into my game and sport,” she says.

“Having contact with our mentors who have a wealth of knowledge and have been there and achieved everything they can in sport gives us an insight into what it takes and how the best go about it. We are learning things that most people wouldn’t gain until much later in their careers.”

In her debut NRLW season Millie Boyle has been busy stacking up the accolades, being selected in the NSW State of Origin side, awarded the Broncos’ Forward of the Year, playing for the Australia World Cup Nines Team and then rewarded with a spot in the Australian Jillaroos Team. This is on top of the cross-code star’s achievements in rugby union playing for the Queensland Reds, the international Wallaroos side and rugby Sevens. The 21-year-old says she couldn’t have done it without her incredible support network, which includes rebel’s Women Mentor Program.

“Having a good support network of a lot of people from different sports and different backgrounds is really helpful,” she says.

“I’ve got a couple of great people within the sport and our coaches that have all helped me be the player I am, I’m very lucky I’ve got a great support network I can reach out to and at the end of the day having mum there, it’s a bit of a cliché but you can always call your mum even if she tells you that you played good if you played bad.”