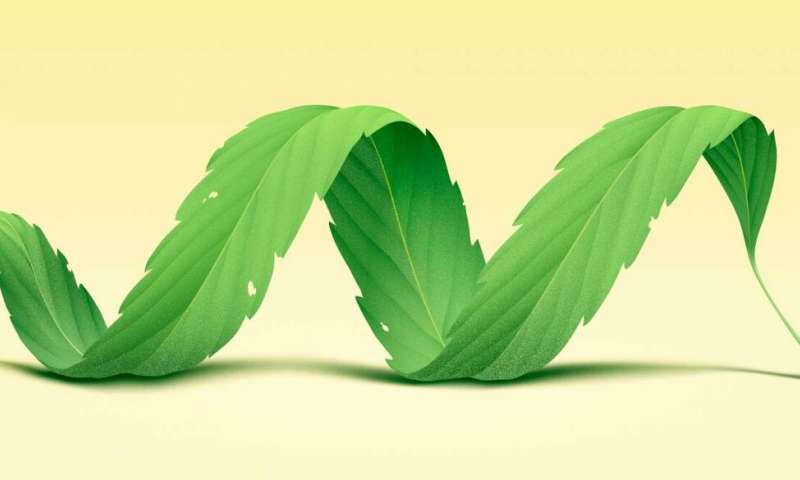 A Chinese research team joined forces with Russian and U.S. biologists to obtain the crystal structure of the human type 2 cannabinoid receptor. Their findings could lead to drugs against inflammatory, neurodegenerative, and other diseases. The authors of the paper, published in Cell, compare the newly discovered structure to that of the type 1 cannabinoid receptor, deeming the two receptors to be the yin and yang of the human endocannabinoid system.

The two cannabinoid receptors, CB1 and CB2, belong to the so-called endocannabinoid system. This refers to a signaling system in the human body that regulates biological processes such as metabolism, pain sensation, neuronal activity, immune function, and others. It has been shown that the cannabinoid receptors can be targeted to alleviate certain pathological conditions, including chronic pain.

While the CB1 receptors are mostly found in the nervous system and are responsible for psychoactive effects, the CB2 receptors are predominantly present in the immune system. Studies indicate that CB2 is a promising target for immunotherapy, as well as treating inflammatory and neuropathic pain, and neurodegenerative diseases. It has also been shown that molecules blocking CB2 can reduce tumor growth.

To effectively treat pathological conditions, drugs need to specifically target CB1 or CB2. However, the two receptors are very much alike. The amino acid sequences that encode them are 44 percent identical. So developing a selective medicine requires knowing the structure of both targets in great detail. Unlike CB1, the structure of CB2 has remained unknown up until now.

To identify the shape of an individual molecule, researchers make a crystal from many such molecules. When arranged in this highly ordered way, the molecules can be exposed to X-rays, revealing their structure.

The team made a crystal (figure 1) from CB2 receptors bound to molecules blocking this receptor, which are potential drug candidates. That way, the X-ray analysis allowed the team to see both the structure of CB2 and how it connects to the blocking molecule, or antagonist.

However, receptors are unstable proteins by nature. To study them, they need to be modified using gene engineering. This involves introducing mutations that make the protein stable without changing its structure or function.

CompoMug is a software suite that predicts mutations potentially useful for stabilizing receptor molecules. The mutations then need to be tested experimentally. This software was developed by two researchers from the Moscow Institute of Physics and Technology and the University of Southern California: visiting MIPT professor Vsevolod Katritch and Petr Popov from the Laboratory of Structural Biology of G Protein-Coupled Receptors. 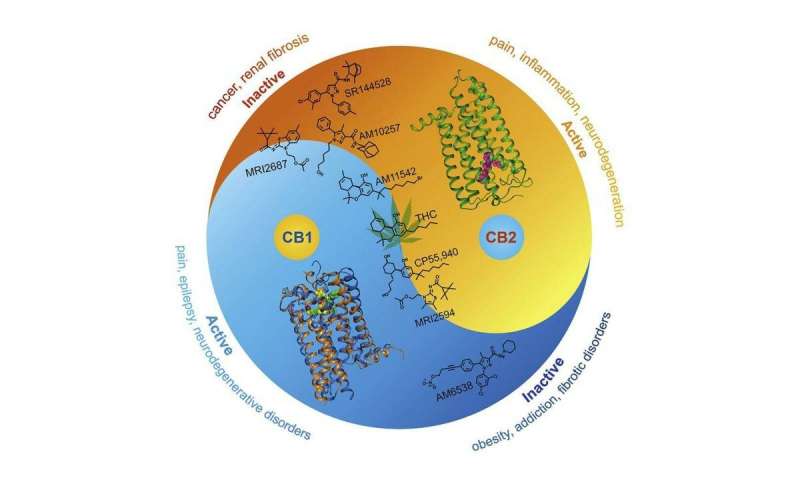 In the study, the CB2 receptor had five mutations prompted by CompoMug.

The researchers contrasted the structure of CB2 with that of CB1. They concluded that substances activating one of the receptors can actually weaken or inhibit the other, and vice versa. This opens up a possibility not just for drugs that target exclusively one receptor, but those that affect both receptors, but in different ways. Figure 2 shows the therapeutic implications.