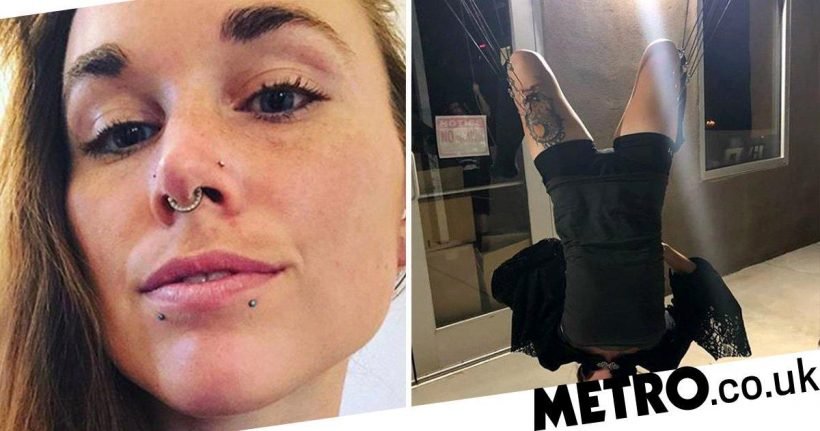 ‘There is certainly a connection between long-distance running and suspending that accounts for why I enjoy them both so much,’ said Breanna.

‘There is that feeling of fear and adrenaline at the start that then becomes an almost calm-like meditation once you get going, and then the overwhelming feeling of achievement at the end.

‘For thousands of years, humans have endured pain as part of daily life, but in the modern world, we have been able to live pain-free.

‘This seems to make us lack at a genetic level, as pain is an essential element of human existence and I, for one, couldn’t do without it.’

Despite the pain of hook suspension – which has been practised by Native Americans for hundreds of years – Breanna insists she is not a masochist, seeing the act as more of an artistic and emotional expression.

During her first experience with it, she was suspended for half an hour. Breanna knew as soon as she was let down that she would have to do it again – she was literally hooked.

‘I was really, really nervous beforehand and was sick twice because there was so much adrenaline pumping through me,’ she added.

‘But once I was up there, suspended five feet off the ground, I had a rush of immense joy and it felt as though I was weightless and floating.’

Six months later she returned and has done it 12 times since.

‘My response to each suspension really varies on my mood. If I am happy then I will have a lot of fun and swing around a bit,’ she explained, adding that she also chooses her position according to her mood.

‘But if I am feeling a bit stressed then it can be really nice to get into a more static position like the hammock – where you are sitting into the suspension with your knees and shoulders hooked.

‘That way, I can sit comfortably for hours and just relax.

‘For me, it is one of life’s greatest joys.’

MORE: Is cutting a massive chunk out of your ears the next big body modification trend?

MORE: I’ve refused to wear a prosthetic but I find the current body modification trend empowering

MORE: Woman with lymphedema which causes large swelling on leg says it won’t stop her dancing