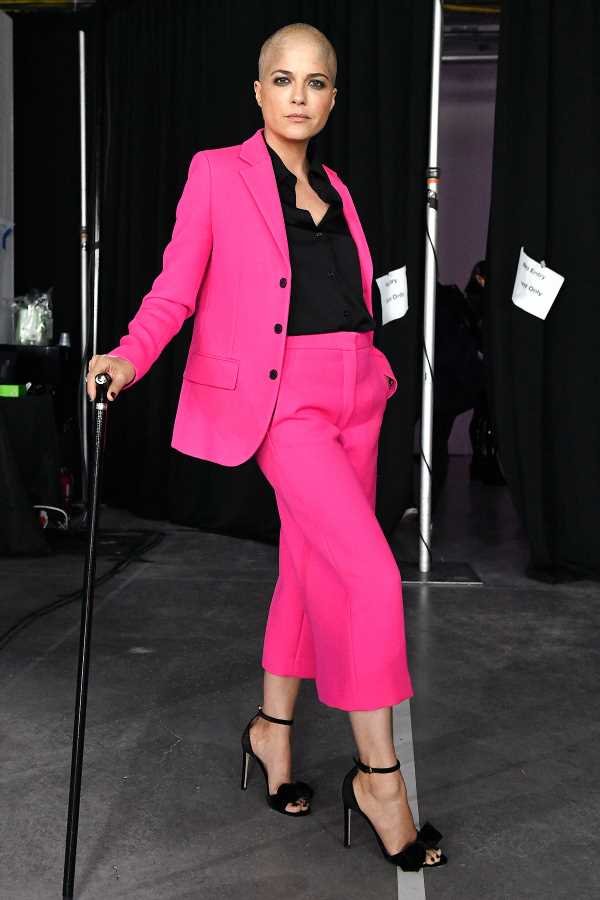 Selma Blair is embracing her new hair as it grows back in after chemotherapy.

The 47-year-old actress shared an update on her health journey on Instagram on Monday, giving fans and followers and up-close look at her growing pixie cut.

“For those few interested at an in depth look at hair growth, post chemotherapy for #hsct,” the Cruel Intentions alum wrote in a lengthy caption alongside a snapshot of the top of her head.

Blair explained that she first cut her hair short “to transition myself and my son for impending baldness.”

“Easy. Baldness came,” she continued, adding that it was when her hair began to grow back in that she started to struggle.

“I didn’t shave head to that end. Of course it fell out. Shiny. Pale dome. Nice enough. It took two months to begin regrowth And it came in fine and pale and very sparse,” she wrote, saying that she shaved her hair again, but this time, “it looked to sad. For me.”

So, the star grew her hair back out, but “it was patchy in color and I felt like dying it brown.”

“Ridiculous!” Blair wrote of the idea, saying she “really only succeeded in dying my scalp.”

A week later, she “buzzed shorter with clippers and a few weeks later, here we are 🙌. A charcoal, thinnish, patchy charcoal head. I will see how a pixie grows in. Or I will buzz again.”

Blair said that her former long brown locks now “[seem] to be too much.”

“So I will leave it short and grey, something I have never before wanted to do,” she said. “I equated it with giving up. And maybe giving up long, brown hair, complete with time consuming and expensive highlights and lowlights isn’t necessarily a give up. Give in. Embrace. Sure. I’ll try it.”

While Blair is choosing to embrace her new ‘do, she added that she wouldn’t shy away from returning to long hair again someday, should the right opportunity come along.

“Unless…some fancy pants company with a thick checkbook wants to entice me out of dye retirement,” she wrote to conclude her caption. “Then I will sing about the glories of processed hair! I certainly will. So, until that wished for day, enjoy the head 💋”

Blair underwent a stem cell transplant and chemotherapy to treat her multiple sclerosis.

Speaking at the TIME 100 Health Summit in New York City last month, Blair said she was initially wary of undergoing such aggressive treatment.

“I had no intention of doing it, I was like, I’m not ruining my body, what’s left of it. Why would I put this horrible drug, chemotherapy, in me? I don’t have cancer,” she said. “But I was kind of out of options and I was looking.”

While Blair is still recovering, she said that “overall,” her treatments went “pretty smoothly.”

But that doesn’t mean that there wasn’t a risk.

“I was warned,” she said. “You kind of make your plans for death, [and] I told my son I was doing this and he said he wanted me cremated. I had more chemo than they usually do for cancer patients, because they almost kill you. And it’s the stem cell that allows you to live with that amount of chemo. The chemo is the MS cure, if it does in fact happen.”

She added that she hasn’t discussed her chemotherapy much yet because she “wanted to show everyone that the proof is in the pudding, but my pudding is still kind of scrambled. I don’t want to scare people away.”

Blair also said that the hair loss was on the back burner when deciding whether or not to take the treatment; her focus was on being able to be there for her son, Arthur Saint.

“That was a small thing, I never minded hair loss or any of those things that were about ego,” she added. “My dream was just to lie next to my son at night and be there as long as I can.”