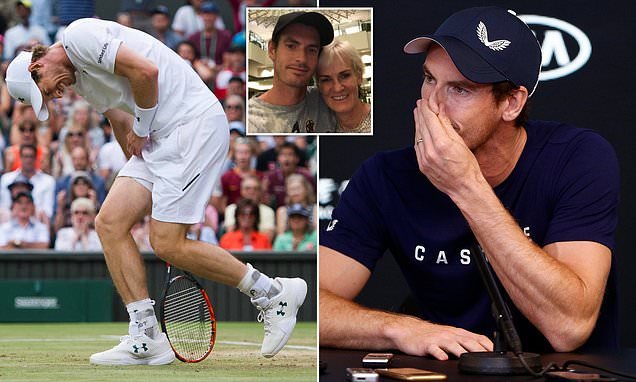 The twice Wimbledon champion revealed in an interview that surgery is his ‘only option’ if he wants to play beyond the summer tennis tournament.

But experts have now warned going under the knife will likely do nothing to keep the Scot competing for longer. 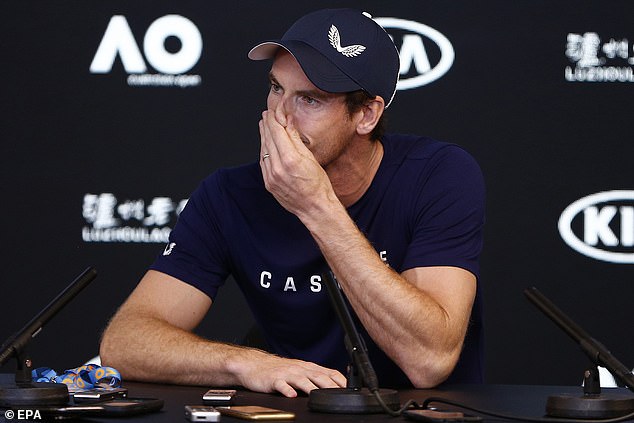 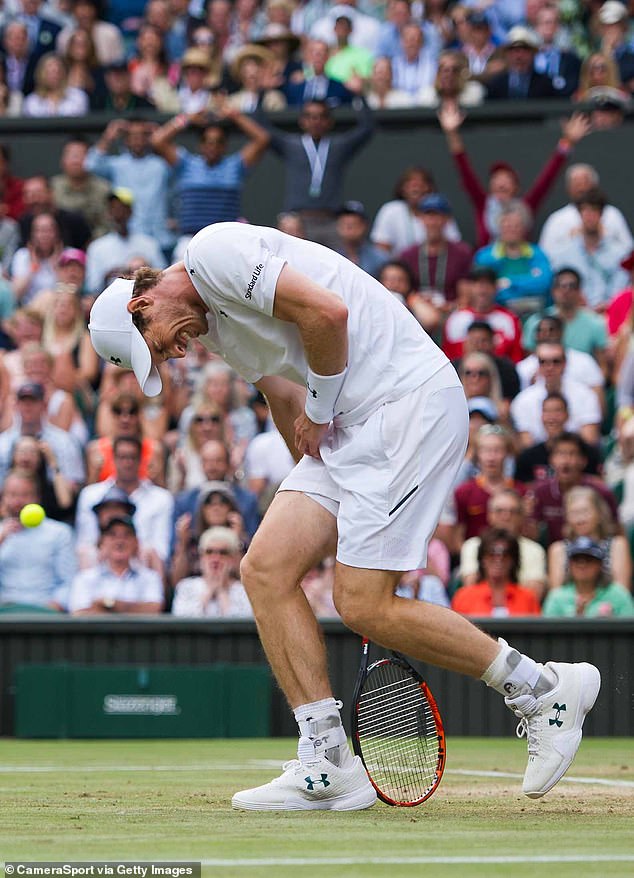 Sir Andy is pictured holding his hip after losing to Sam Querrey in the Mens Singles Quarter Final Match at Wimbledon on July 12 2017. Experts suspect he may have severe osteoarthritis

Although he has been coy about his exact injury, some experts believe they know what is causing him the pain.

FAI occurs when extra bone grows along one or both of the bones that form the hip, giving the joint an irregular shape.

This causes the bones to rub against each other, which can damage the joint, limit movement and lead to pain.

Ash James, a sports physiotherapist at Manchester Metropolitan University, warned FAI can be made worse if an excessive load is placed on the joint during adolescent growth spurts.

This is bad news for Sir Andy, who has been playing since he was just three years old.

Surgery can help to clean out damaged cartilage from the hip socket but Adam Hoad-Reddick – a hip and knee orthopaedic surgeon at BMI The Alexandra Hospital in Cheadle – warns tennis is not the sport to play to keep hips in top condition.

‘It’s like the brake linings of your car or your clutch plate,’ he said. ‘If you rag it too hard, it wears out earlier.’

Sir Andy has admitted previous surgery has done little to ease his suffering and he is considering hip resurfacing.

This is when the femoral head – the top of the thigh – is not removed like in a traditional hip replacement but is instead trimmed and capped with a metal covering.

A layer of metal is also placed in the pelvic socket, meaning metal rubs against metal rather than bone against bone. 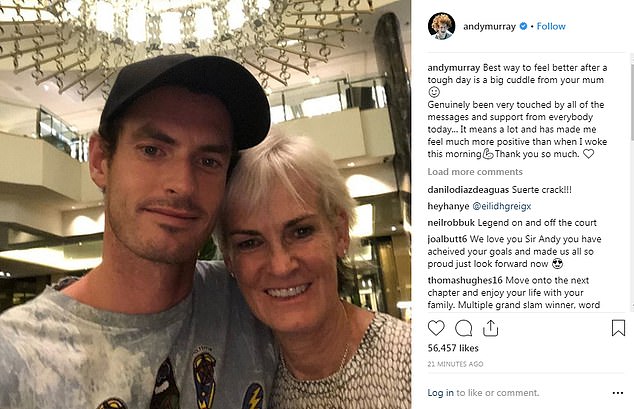 After announcing his plans to retire Sir Andy took to Instagram saying a ‘big cuddle’ with his mother Judy was raising his spirits. He thanked his followers for their messages of support

‘For him to consider resurfacing, it’d suggest he has quite severe osteoarthritis,’ Winston Kim, a consultant orthopaedic surgeon at Manchester Hip and Knee Clinic, said.

Mr James added he would advise patients undergoing hip resurfacing never to play tennis again – and that is an amateur on the weekends not a world champion.

Sir Andy admitted any operation would be to improve his quality of life, not his performance on Centre Court.

And Mr Hoad-Reddick added he could lose an element of ‘pelvic stability and balance’ if he underwent hip resurfacing.

But the Scot’s options are limited with OA sufferers lacking cartilage, which does not regenerate.

Although scientists are trying to create cartilage via stem cell treatment, it is still being tested in the lab.

‘Right now, once a hip has become significantly degenerate, there’s no real treatment other than replacement,’ Mr Hoad-Reddick said.

This may be a problem for the 31-year-old, who is highly active and needs his replaced hip to last longer than a pensioner would.

Sir Andy’s shock plans to retire before his five-set loss to Roberto Bautista Agut during a four-hour game at the Australian Open earlier this week.

Speaking in a post-match interview, the Scot tearfully said he would do ‘everything he could’ to compete at Wimbledon. But he told reporters in a press conference he could have just played his ‘last match’.

‘My hip is screwed anyway,’ Tennis 365 reported him as saying. ‘Option B [rest] gives me the best chance of playing at Wimbledon.

‘The first option [the hip operation] makes my life a lot more comfortable and enjoyable but potentially means I never play again and also miss Wimbledon.’

But Sir Andy, who has admitted his hip is ‘screwed’, also told BBC Radio 5 Live on Monday: ‘Surgery is my only option if I want to play beyond just Wimbledon’

The Scot became the first British player since 1977 to win a Grand Slam singles tournament in the 2012 US Open final with victory over Novak Djokovic.

He is also the first British man to win multiple Wimbledon singles titles since 1936.

In another career highlight, Sir Andy won the Olympic gold medal at London 2012 and Rio 2016, making him the only player to win two Olympic singles titles, before becoming the world No.1.

Sir Andy was named the ATP Player of the Year in 2016 and was the flag-bearer for Great Britain at the Rio Olympics in the same year.

He is also a member of the ‘Big Four’, who have dominated men’s tennis since 2004, alongside Roger Federer, Rafael Nadal and Novak Djokovic.

June 9, 2017 – Sir Andy puts his shaky form going into the French Open behind him to reach the semi-finals before losing to Swiss ace Stan Wawrinka; but begins to feel the flare-up of a long-standing hip issue that had been under control

June 27, 2017 – Sir Andy does not mention his hip problem after losing his first match at Queen’s to Jordan Thompson but is forced to publicly acknowledge it when he pulls out of a scheduled exhibition match at the Hurlingham Club, a move cited as precautionary

July 2, 2017 – After pulling out of a second Hurlingham match, Sir Andy calms fears he may be forced to miss Wimbledon by confirming on the eve of the tournament he will play

July 12, 2017 – Walking with a noticeable limp, Sir Andy battles his way into the quarter-finals but his title defence ends with a five-set loss to Sam Querrey. Afterwards, the Scot insists he does not expect to be away from the tour for too long

August 26, 2017 – After pulling out of two Masters events and losing his world No.1 ranking to Rafael Nadal, Sir Andy travels to New York, intending to return at the US Open. But two days before the tournament he announces at a press conference he is pulling out, saying his hip is too sore to give him a chance of winning the tournament

September 6, 2017 – Sir Andy heads home for further consultations with a number of hip specialists then announces he is likely to miss the rest of the year but is hoping to avoid surgery

January 2, 2018 – Sir Andy schedules the Brisbane International for his second attempt at a comeback only to pull out on the eve of his first match. In a heartfelt post on Instagram accompanied by a childhood photo, he says: ‘I choose this pic as the little kid inside me just wants to play tennis and compete. I genuinely miss it so much and I would give anything to be back out there.’

January 8, 2018 – Sir Andy announces he has undergone hip surgery in Melbourne. In an upbeat assessment, he added surgeon John O’Donnell is very happy and he is targeting a return for the grass-court season

May 8, 2018 – After Sir Andy does not enter a Challenger tournament in Glasgow that had been earmarked for his return, it emerges he has suffered a setback in his recovery and has been forced to take more time away from the court

June 5, 2018 – Sir Andy says he is ‘getting closer’ to a return but pulls out of his scheduled first grass event of the season at the Libema Open in Holland

June 16, 2018 – After two weeks back on court, Sir Andy announces just before the draw he will make his comeback at the Fever-Tree Championships at Queen’s Club

June 19, 2018 – A lengthy 342 days since his last competitive outing, Sir Andy finally makes it back on court in the Fever-Tree Championships against Nick Kyrgios. He puts up a good fight but eventually loses his first-round match 2-6, 7-6 (7/4) 7-5.

June 25, 2018 – Sir Andy beats Wawrinka at Eastbourne but is then comfortably dispatched in the round of 16 by British No.1 Kyle Edmund as he continues to feel his way back into games

July 30, 2018 – Sir Andy’s fans grow in confidence at the Scot’s increased participation and a run to the quarter-finals – where he is beaten due to a walkover for Alex de Minaur – suggests he is slowly on the rise again

August 13, 2018 – A first round exit to Lucas Pouille shows Sir Andy is struggling to recapture the form that saw him go on to win Wimbledon twice as his hip issues see him hold back in three-set match

August 30, 2018 – In only his fifth tournament back since returning from hip surgery, Sir Andy falters in four sets against Fernando Verdasco 7-5, 2-6, 6-4, 6-4 in the US Open second round as the sweltering conditions did little to help his cause. His noticeable limp between points became more and more obvious

September 28, 2018 – A quarter-final defeat in Shenzen to Verdasco sees Murray call time on the 2018 season as he takes time away to get himself in the best possible condition for the 2019 Australian Open

December 27, 2018 – Despite some time away since losing to Verdasco in Asia, Sir Andy admits the pain is still prominent as he prepares to play in the Brisbane International – a warm-up tournament for the Australian Open. In his last-16 tie against Russian star Daniil Medvedev, Sir Andy is comfortably beaten 7-5, 6-2 as fears grow over the condition of his hip

January 10, 2019 – Leaves Australian Open press conference in tears and suggests his time in Melbourne could be his last Grand Slam tournament due to the pain being too much to continue playing through