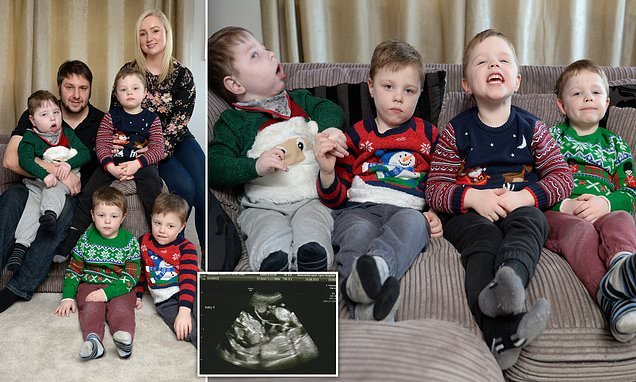 ‘They were the best present I could ever have wished for’: Four brothers ‘beat 50-MILLION-TO-ONE odds’ to become the UK’s only naturally-conceived identical quadruplets

Five-year-olds Alfie, Sam, Jake and William Thomson, of Carlisle, Cumbria, are one of just 70 sets of identical quadruplets in the world.

The ‘Christmas miracles’ were born via C-section to their parents Becky Graham, 32, and Barry Thomson, 40, four weeks early at Newcastle Royal Infirmary on December 5, 2013.

Weighing 3lb 10oz, 3lb 9oz, 3lb 1oz and 2lb 11oz respectively, Alfie – the heaviest of the boys – was diagnosed with cerebral palsy shortly after being born due to a lack of oxygen at birth.

Although raising four ‘boisterous’ boys can be tough, the couple, who are also parents to seven-year-old Olivia, call their sons the ‘best present we could ever have wished for’. 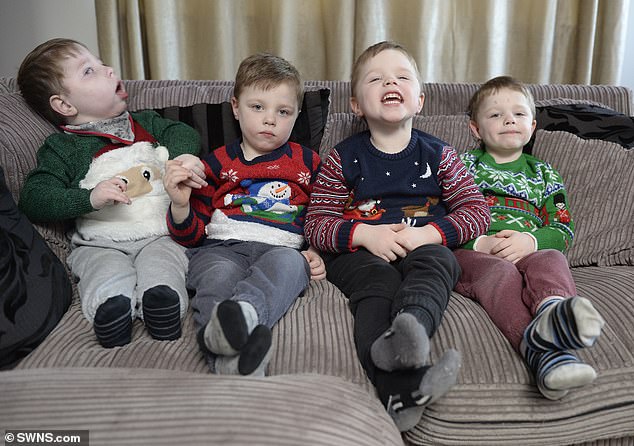 Five-year-old brothers beat 50million-to-one odds to become the UK’s only naturally-conceived identical quadruplets. Pictured left to right are Alfie – who has cerebral palsy – Sam, Jake and William Thomson at their home in Carlisle, Cumbria recently 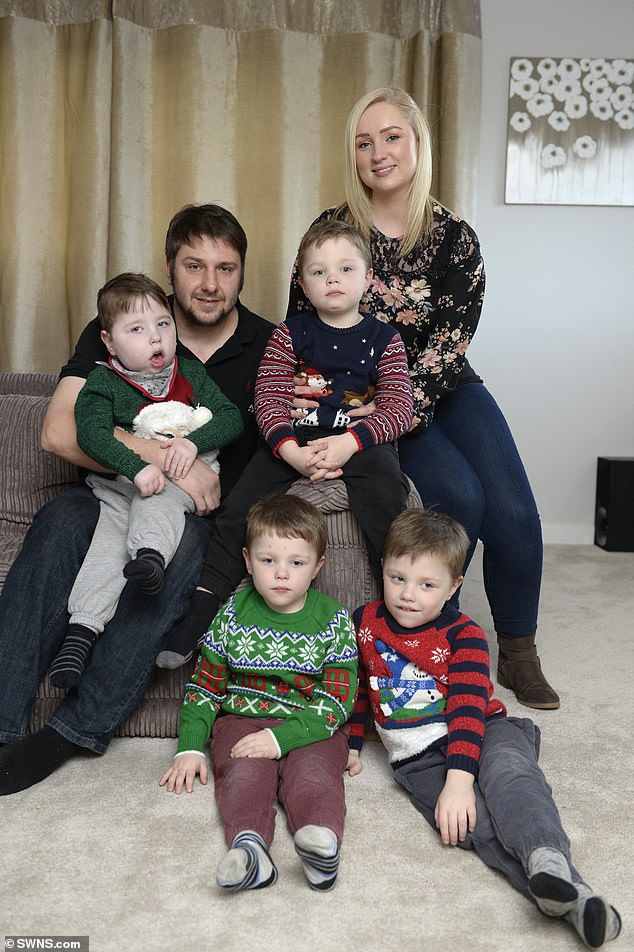 Their parents Becky Graham, 32, and Barry Thomson, 40, (pictured with their boys) call them their ‘Christmas miracle’ and ‘the best present they could ever have wished for’. The brothers were born four weeks early via C-section at Newcastle Royal Infirmary on December 5 2013 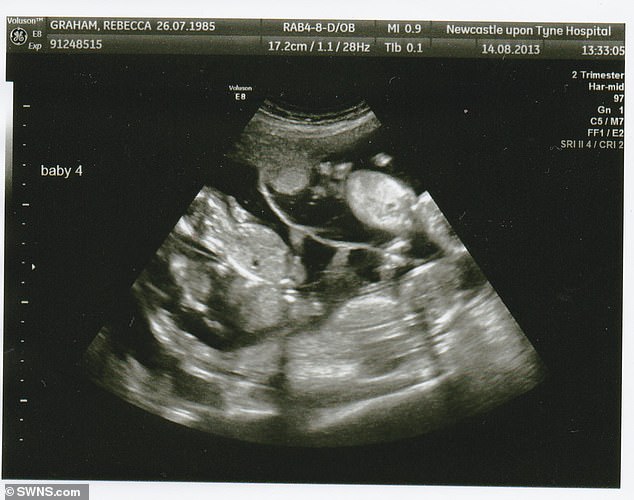 Ms Graham only discovered she was expecting quadruplets during her 12-week scan (pictured). Although in shock, she said: ‘We were always going to keep all four of them’

Speaking of her boys’ arrival, Ms Graham, who works in retail, said: ‘The last five years seem like a whirlwind.

‘They were given to me for a reason. They were the best present I could ever have wished for.’

The family are looking forward to having what they hope will be a relaxing Christmas Day during the stressful festive season.

‘We are just looking forward to spending Christmas together,’ Ms Graham said. ‘It will be a day for us to just relax and enjoy being with each other.’

Christmas is an expensive time for the family, who spend well over £1,000 on presents for their five children.

Ms Graham and her partner Mr Thomson, a car dealer, also fork out £2,000 just filling their children’s wardrobes every year.

‘We have been saving all year for Christmas,’ Ms Graham said. ‘December is really expensive because we have four birthdays and Christmas to pay for.

‘But they are our Christmas miracle and I wouldn’t change our life for the world.’ 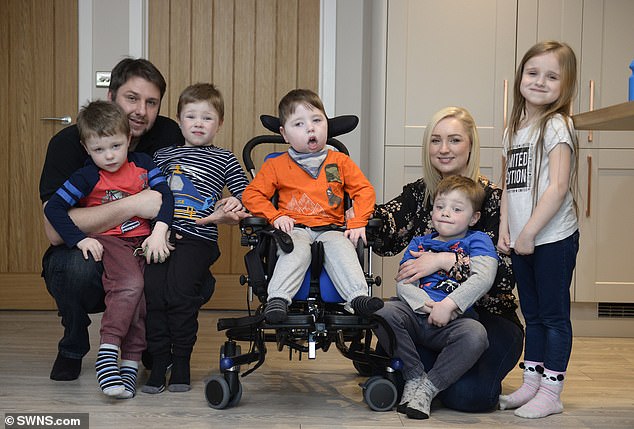 Pictured with their boys and their seven-year-old daughter Olivia, the couple are looking forward to spending what they hope will be a relaxing Christmas Day at home together

Ms Graham discovered she was pregnant with quadruplets during her 12-week scan at a hospital in Carlisle.

‘It was just a complete shock,’ she said. ‘We had a million thoughts going through our heads about how on earth we would manage.

‘We were always going to keep all four of them.

‘It was a scary pregnancy because of the risks involved but we felt so lucky to be having four babies.’

Due to the complexity of her pregnancy, Ms Graham was transferred to a hospital in Newcastle, where she had check-ups twice a week.

By week 20, Ms Graham’s bump was already the size of a full-term pregnancy.

She was even forced to spend the four weeks before she gave birth in hospital so doctors could monitor her. 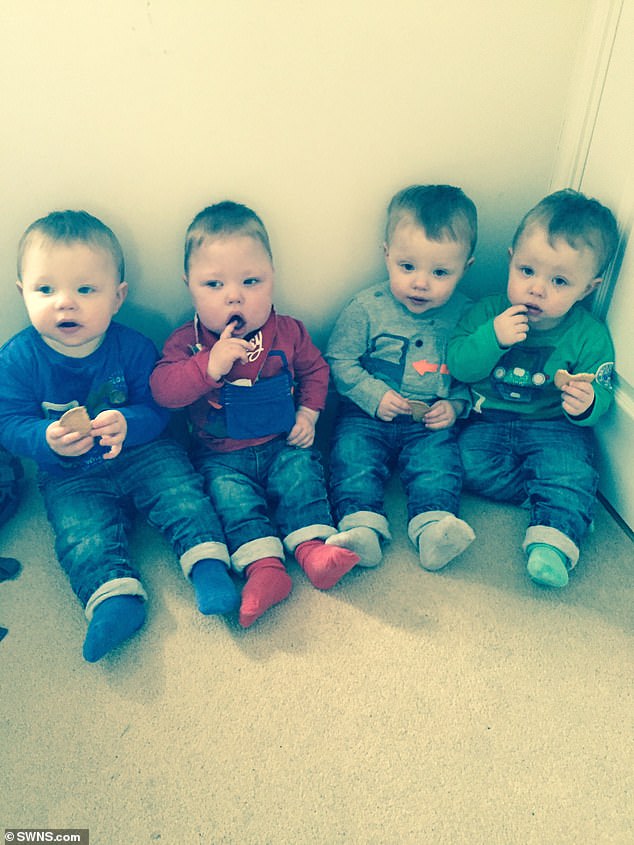 Pictured as two-year-olds, the boys’ arrival instantly turned their family’s life upside down 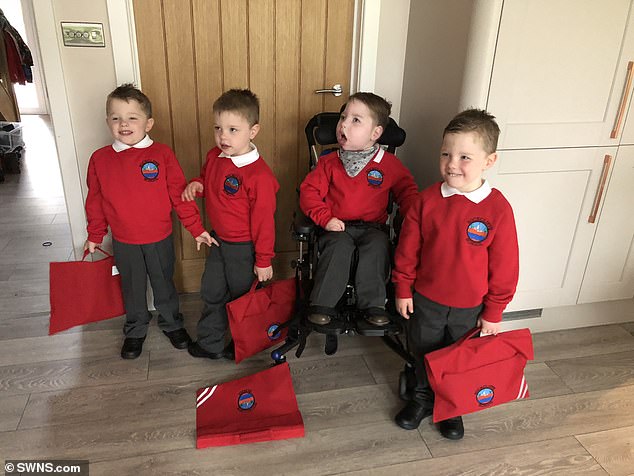 Pictured as four-year-olds on their first day of school, Ms Graham insists the boys are ‘all very unique in their own way’ despite many people getting them muddled up

Once the boys arrived, the couple’s family instantly changed.

‘We have struggled but it’s hard to imagine being without them,’ Ms Graham said. ‘I wouldn’t change our life for the word.’

She added, however: ‘Meal times can be tough. I have to be quite strict otherwise I’d end up cooking five different meals.

‘Living with four boys is a challenge. I do get called “super mum” at times. I’m constantly picking things up after them but they are so loving.

‘They do fight over toys sometimes but really love each other. They are so cuddly and have a fantastic sense of humour.’

Although they all look very similar, which confuses some people, Ms Graham insists the boys all have very different personalities. ‘They might all look the same but they are very unique in their own way,’ she said.

Olivia also gets along well with her four brothers, but sometimes struggles with the lack of ‘me time’.

‘It can be hard for her at times and when she’s had enough she will just have her own time in her room,’ Ms Graham said. ‘But they all play together.’

The family recently spent thousands renovating a five-bed house, with Alfie having his own specially-modified room, while the rest of the boys share.

The couple hurriedly bought a three-bedroom house when they discovered they were expecting quadruplets, after previously renting, but the place ‘never felt like home’.

‘It’s so lovely to be settled in our new home,’ Ms Graham said. ‘[Christmas] will be a special day for us.’ 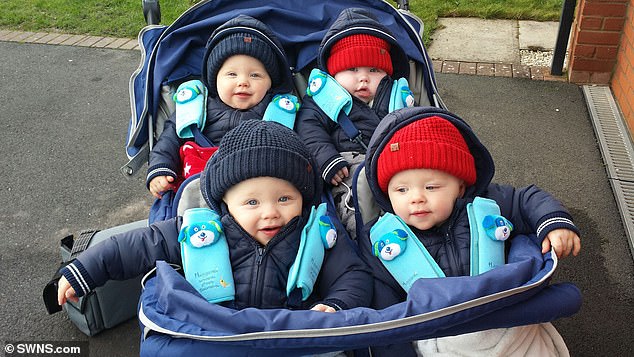 The couple spend well over £1,000 on Christmas presents for their five children every year and £2,000 just filling the youngsters’ wardrobes. The boys are pictured in January 2015 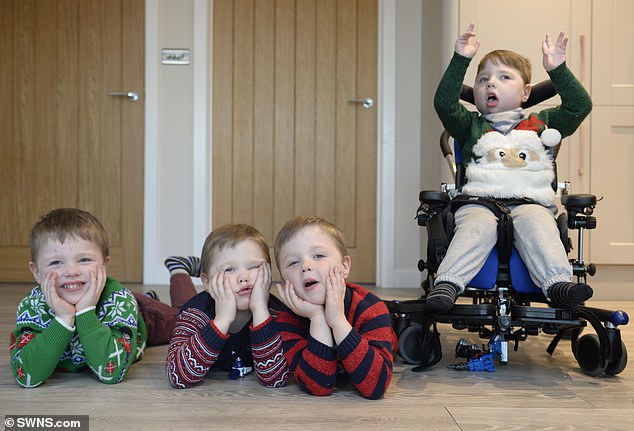 Although they fight over toys, Ms Graham insists the four of them ‘really love each other’