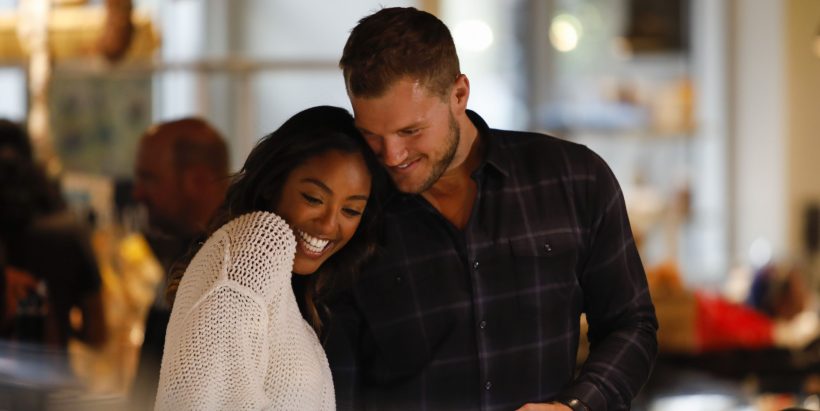 If you watch The Bachelor, then you know that Monday, March 4 is Fantasy Suite time. (For those less familiar with the ABC dating show, the “Fantasy Suites” are the Bachelor’s first and only overnight dates with his three remaining girlfriends before maybe proposing to one of them—and the dates are not on camera. This show is wild!)

The Bachelor currently stars Colton Underwood, a 26-year-old former football player, charity enthusiast, and handsome jock-next-door. This season of the show can’t stop talking about one thing: his virginity. It’s not a will-they-won’t-they love story this time around, but a will-he-won’t-he-lose-his-virginity situation. It seems like every Bachelor promo mentions his lack of experience, referencing his virginity as some sort of abnormality, or at the very least something that makes him a rarity. While hints to “this could be the night” have happened all season, Fantasy Suites mean that this really could be THE NIGHT.

This heightened attention around Colton’s virginity is sending a pretty messed-up message. When it comes to sex, people should have the right to do whatever they want—whenever they want. That’s what sexual freedom is all about. With that in mind, we talked to people who had sexual experiences “later in life,” by The Bachelor standards. And guess what? At the end of the day, it wasn’t that big a deal.

All names have been changed to allow subjects to speak freely on private matters.

“I never needed to worry about it as much as I did.”

“I was 30. It wasn’t for religious reasons or anything intentional, I just never dated anyone serious enough to give me the level of comfort I needed to be that vulnerable. It didn’t necessarily bother me, but I did often feel embarrassed by the stigma of the (problematic) concept of “virginity.” Before we had sex, I tried to be upfront with my current boyfriend about my lack of experience. I trusted him enough, plus I knew it would be pretty obvious! He never made me feel bad or weird, and in retrospect, I never needed to worry about it as much as I did through all those years of “virginity.” —Lilly

“I felt as though I was somehow weird or different.”

“I did not lose my virginity until a month before I turned 26 years of age. Until that moment I never really felt fully ‘ready.’ Even with this in mind I can’t begin to count the number of times that I felt as though I was somehow weird or different from everyone else. In the world that we live in today, going against societal norms is never easy and and at some point this has to change. As a result of societal pressures, waiting until later in life to have sex is not very common, especially with the way that it can be glorified on various forms of technology all over the world today… It was more spontaneous so we talked in the moment and yes, it was positive… I felt an overwhelming sense of relief and I’m more comfortable now.” —Todd

“I was almost 25 the first time I was in a committed relationship, and subsequently, also the first time I had sex. I grew up extremely evangelical Christian in the height of the True Love Waits/I Kissed Dating Goodbye movement. Everything I was raised on heavily emphasized that sex was something dirty and something you should NOT want, especially if you’re a woman … I was 19 and had never so much as kissed someone or dated.

“Since then, its been a process of unlearning for me that almost all of my friends who had the same upbringing have faced, too. By 20, I didn’t really have any hang-ups about dating, but it just…didn’t happen…I was busy. I moved a lot for internships and jobs during college and after. I was always more focused on work and friends and hobbies and it was never a priority for me. Eventually at 24, I decided I wanted to actively try dating, downloaded Bumble, and met a guy. We dated for six weeks before I slept with him the first time, and I told him around week 3 that I hadn’t ever done it before, but that it wasn’t a particularly big deal to me. We had sex. It was not a huge deal.” —Susanna

“My first time was very much a result of wanting to get it over with. I was 23 and I’d recently had my heart broken. Prior to that, my first almost-sexual encounter was at 19, a non-consensual situation I managed to get out of, which probably had a lot to do with my anxiety. This time, all systems were a go, and we had sex on my friend’s futon, and it was not even slightly romantic, although I think he figured it was. My brain wouldn’t shut off. I remember thinking “you’re not a virgin anymore” and “don’t let him know this is your first time.” I told myself to pretend to be confident. Was it amazing? No. Was it disappointing? Not really.

“I think what I enjoyed most about it was that I was good at it. Being 23 and sexually frustrated, I’d read and written and watched my fair share of smutty things, and knew what I wanted to do and what I wanted done. That guy ended up being a jerk, but for a year we had a bunch of sex of all kinds, and even though I’m not his biggest fan, he was a safe place for me to get my sexy sea legs, so to speak. I’m not sure why I felt such shame over it (virginity), when I don’t view it as shameful in others. If society isn’t slut-shaming, they’re virgin-shaming, and it feels like there’s no winning.” —Vanessa

“I grew up in a super conservative evangelical Christian home. Ya know, “purity culture”— lots to unpack there … I went to Germany when I was 23 to work at a hotel and travel. It was there I really started to experience the world for myself for the first time, figure out what it was that I believed and why, and who I was sexually. I discovered a few things, such as, oh, I am also attracted to women.

“My newly found bisexuality explained a lot of things about growing up. It took time and unpacking a lot of mixed of feelings of guilt and confusion to finally be comfortable with myself sexually. I made out with a few guys while I was there but not until, like, my last month there did I “have the sex.” We were at a local spot, lots of people drinking, flirted a bunch, then went back to our living quarters. Had a Facebook message from a guy I thought I had a kind of fun, flirty banter with, and he insinuated wanting to help me “make my bed”—I was currently packing all my stuff up to move back to the States—and so he came over and it moved pretty quickly from there. I explained to him I had no experience. He also didn’t have a condom, so we mostly fooled around. There was a little penetration, no real pleasure on my end, and then he came on my stomach, so all in all, very anticlimactic for me.

“… Fast forward, and I tried out the trusty Tinder game, which gave me anxiety. I have met one and only one person off that (or any) dating app, and I’m still with him. He always made me feel comfortable, and we definitely worked our way up to penetrative sex. It definitely wasn’t great the first time, but we had such a great connection, and we were both having fun and communicated our way through it all.” —Joan

“Growing up, I always had the mindset that I was going to save myself for marriage. It was a personal decision that I made on my own, and it was not something that my family instilled in me. Just from what I had learned and seen in life, it felt like the right decision for me. Religion had a part to do with it, but not a heavy impact. I had this mindset straight through college, and right up until I was 24. Also, up until this point, I had not dated or been in any relationship. So going into a relationship with someone who did not believe in waiting until marriage changed my perspective, and ultimately ended in me shifting my feelings and views on sex and ‘your first time.’

“For me, it was not something I took lightly, and not something that I was really comfortable confronting. But I did anyway, and ended up having my first sexual experience when I was 24. I think for me, it was worth the wait, because it was with someone who, at the time, I really cared about. And I think that it was extra special for me knowing I waited and made the decision when I was truly ready. It is almost inevitable that someone having that first experience later is due to a personal choice. And I hope that resonates with people more than anything.” —Kyle