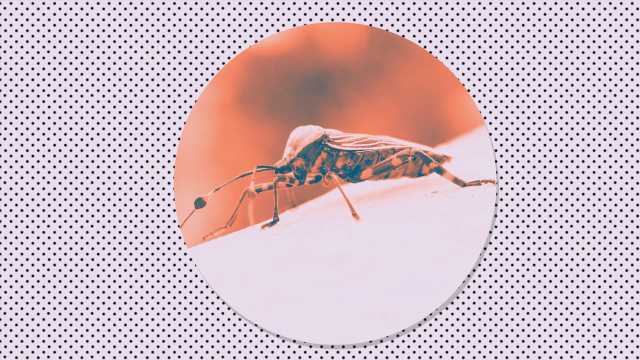 A species of the “kissing bug,” which can cause Chagas disease, has been found for the first time in Delaware, according to a new report from the CDC.

The bug—technically known as the triatomine insect—can carry a parasite called Trypanosoma cruzi in its gut. Triatomine bugs are often called kissing bugs because they sometimes bite humans around their mouths as they sleep. If Trypanosoma cruzi is transmitted to humans, it can cause Chagas disease, which in turn can lead to strokes and heart disease.

“In July 2018, a family from Kent County, Delaware, contacted the Delaware Division of Public Health (DPH) and the Delaware Department of Agriculture (DDA) to request assistance identifying an insect that had bitten their child’s face while she was watching television in her bedroom during the late evening hours,” the new CDC statement says. “The parents were concerned about possible disease transmission from the insect. Upon investigation, DPH learned that the family resided in an older single-family home near a heavily wooded area. A window air conditioning unit was located in the bedroom where the bite occurred.”

The kissing bug doesn’t give you Chagas disease the way a mosquito gives you a virus. Instead, Chagas disease is spread through the kissing bug’s feces. “If the kissing bug bites you and it has a blood meal and then it defecates and then you scratch that area and rub it into the wound or rub your eyes, you could become infected,” Paula Stigler-Granados, PhD, assistant professor at Texas State University’s School of Health Administration, previously told Health.

That said, your chances of becoming infected are low, given the many events that need to take place before you could get Chagas disease—especially if you live in the U.S. Most people who have the illness in the U.S. contracted it in Latin America, where the parasite that causes the illness is more common. “Only a few cases of Chagas disease from contact with the bugs have been documented in this country,” the CDC statement says. It adds that to date there’s no evidence of the presence of the parasite that causes Chagas disease in Delaware.

Plus, the condition affects people differently: Even if you do get it, you might not experience any symptoms. Some people who get Chagas disease will have a flu-like illness that might last for a few weeks. After that, the patient might feel fine for years. “For some people this period lasts a year, for some it’s 30 years, and for some it’s a lifetime,” Stigler-Granados said.

But 30% to 40% of those who get Chagas disease become sick later in life. Cardiovascular disease, a life-threatening arrhythmia, heart failure, cardiac arrest, and strokes are among the complications that Chagas disease can cause. Experts haven’t yet figured out why some people develop complications later in life and others don’t. “We still don’t really know what makes a person susceptible to developing full-blown Chagas disease versus never getting it at all,” Stigler-Granados said.

The CDC estimates that about 300,000 people in the U.S. have Chagas disease. But Stigler-Granados said some experts think that this estimate is low and that the correct number is closer to 1 million.

If you live in an area in which the kissing bug has been observed, you should be aware of what a kissing bug looks like, Stigler-Granados said. They are usually bigger than a penny, and most have red or orange stripes around their bodies.

The new CDC statement recommends taking some precautions to minimize your risk of encountering a kissing bug, including “locating outdoor lights away from dwellings such as homes, dog kennels, and chicken coops and turning off lights that are not in use.” Keep homes clear of trash, wood, rock piles, and bird or other animal nests; repair any cracks in walls or roofs; and seal the gaps around your window air conditioner units as well.

The takeaway is this: Your chances of developing Chagas disease are slim—but it can’t hurt to keep kissing bugs in mind when you do your spring cleaning this year.