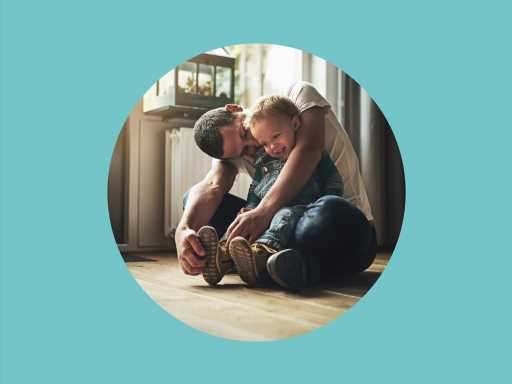 Parenting a child is hard enough, and when you factor in an ADHD diagnosis for you and your child, I’m sure there are moments when it may seem extremely overwhelming. Chris Illuminati knows the feeling having been diagnosed with ADHD alongside his 12-year-old son. “Honestly, it’s a daily struggle,” he says of raising his son with ADHD when he too has the same diagnosis. “Life is overwhelming. Fortunately, I can tell when I’m overwhelmed. I’ll typically take a step back and ask myself, ‘what’s one thing you can focus on at the moment?’ If the feeling is too strong, I’ll either lock my phone in a drawer, which is a huge trigger and usually the source of the feeling or go for a run or workout.” While the causes and risk factors for ADHD are unknown, current research shows that genetics plays an important role with recent studies linking genetic factors with ADHD, according to the CDC.

But just because of their dual diagnosis, doesn’t mean that it hasn’t helped Chris better relate to his son. “I recognize so many of my issues in him, and I can guide him through it,” Chris says. Chris’ actual diagnosis came when he was 30. “I went to the doctor, filled out a questionnaire, and aced a test without studying for the first time in my life,” he says. At the time ADHD didn’t have a name yet, but he displayed all of the classic symptoms growing up. “My parents were told about these issues during parent/teacher conferences,” he says. “My parents would say to me, ‘you need to stop doing these things,’ but neither they nor I realized I couldn’t stop even if I tried. The brain typically always wins.” Below, read to learn how Chris’ ADHD has impacted how he raises his son with the same diagnosis.

‘We give him time off of his medication,” Chris says. “He doesn’t take his medication on weekends or during the summer. These are the times he’s doing the things he enjoys doing such as summer camp, playing with LEGOs, video games, etc., and can already hyper-focus on those tasks.”

On tools to stay focused

“There’s a reason I’m the undisputed champion of post-it notes,” Chris says. “It’s not just because I write funny jokes on them. I use them for everything. They’re one of my most effective life management tools. To-Do lists are also crucial, but I try to keep them to only 5-6 tasks a day. I’ve learned that the best tool to stay focused and address my ADHD is putting pen to paper. I’ve tried to keep notes on the computer or on my phone, but I forget to pay attention to them. Pen and paper are a way to reinforce things in my brain. BRAIN.FM has also been a game-changer. It’s an app with music specifically made to help focus. I suggest everyone, even people without ADHD, check it out.”

Chris notes that he wishes he and his son did more practice together to help manage their ADHD but highlights that his son’s school has been a help in helping him keep track of what his son is doing or not doing. “It’s tough to help another person with ADHD implement tactics or tools when you have trouble doing these things yourself,” he says. “When he gets a little older, I’ll be happy to share the tips and tactics that help me, but right now, I feel he has to figure out what works best for him. Giving a person with ADHD rules or guidelines to follow is the quickest way to lose them.”

Everything can be a challenge, Chris calls out. Especially because you’re dealing with your child’s ADHD ticks and quirks, along with your own. “It’s hard to help a kid focus when you can’t focus either,” he says. “It’s almost like trying to help an addict kick an addiction while attempting to kick your own.”

“The brain is incredibly powerful. It’s going to do whatever it wants to do. ADHD medication help, but just because a child is taking medications for focus, that doesn’t mean they are always going to focus on the right thing,” Chris says. “The most significant advice I’d give parents is to take a step back and tell yourself, ‘my kid isn’t doing this on purpose. This is the way they’re wired.’ Sit your kid down and ask, ‘what was going through your mind at this moment and let’s talk about ways to handle the situation the next time it pops up?’”

“I understand that many of my son’s actions and reactions aren’t his fault — his brain just works differently. I encourage parents in a similar situation to embrace the way their child’s mind works to think of all the amazing things they can do.”