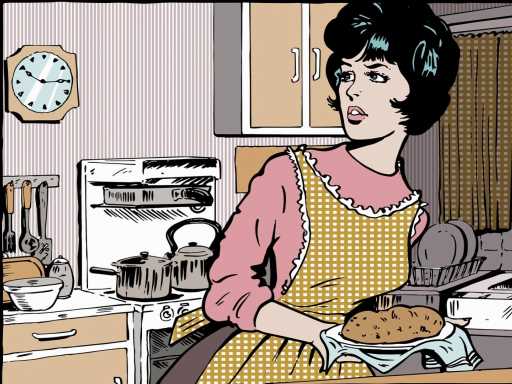 Reddit is offering support to a new mom who shared her story on Am I The A**hole forum. The user explained that her husband has been getting home late at night — as in 2am — and claiming that his work hours had been extended.

“I’m a new mother, I’m constantly exhausted and I get only a few hours to sleep,” she wrote. “Normally when he’s out so late I have my dinner and not put anything aside for him because he obviously eats at work like he said.” One night, she was awoken by her angry husband at 2:45am.

“I ask him what he want[s] and he tells me he’s hungry and wants to eat,” the Reddit user recounted. “I tell him that I didn’t have dinner put aside for him thinking he’d already eaten at work. He loses it on me and asks ‘are you f*cking crazy? ate at work?’ Then, the husband demanded that his wife make him dinner in the middle of the night.

“I snap at him and yell at him asking what dinner at 2 in the morning,” she wrote. “He then throws at me that he was working all day then asks what I was doing all day. The baby gets woken up which makes me madder.” The husband stormed out of the room — while also making disparaging comments about his wife’s weight.

If your blood is not already wildly boiling, he then proceeds to moan about how much work he does for the family and “the least” his wife could do is have dinner ready for him. “AITA for not getting up to make him dinner at 2 and snapping at him after he insisted?” the user asked.

Reddit sprang into action to not only let her know that she was absolutely NTA, but also offered some strong words for what her next steps should be. “I have an 18 month old. If my partner had EVER treated me that way, especially after taking care of our child all day, I believe that would be it for me,” one user commented. “The audacity and disrespect is on full display. Plus, not knowing what he’s doing out that late, with a baby at home? Nope. Done.”

Another added: “He can go and cook his own f*cking dinner. It’s not your responsibility to mother him. He is a grown adult and needs to start acting like one. I’d kick him out for good with that behavior. Gross.”

Many questioned whether those late night shifts were even real. “Red flags everywhere. Get out of this marriage,” someone wrote.  “First, why is he not coming home until 2:00am? Maybe I am misunderstanding, but this doesn’t sound like his regular shift. If this is correct, then let me just say, nothing good happens at 2:00am. He isn’t out volunteering at a senior center or walking dogs at a shelter at 2:00am. He obviously isn’t at an all night diner getting his grub on. So what is he doing?”

And then there was the person who got to the root of what everyone was thinking: “What is wrong with your husband?! NTA. Stay safe, OP. I’m concerned for you.”

We’ve got some great suggestions for clothes your teens will actually wear.