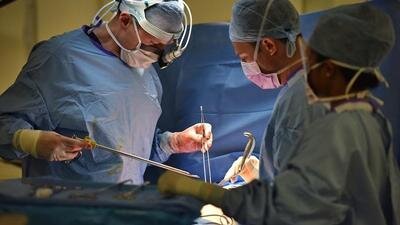 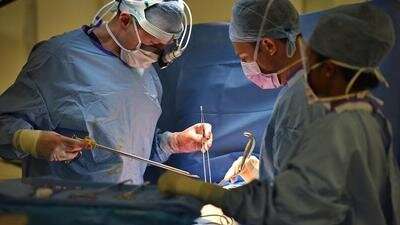 New technology has allowed the public to immerse themselves in a cancer operating theatre by filming a complex operation performed by Professor Tim Underwood in 360 Degrees.

The seven-hour procedure on Janet Jenkins, 66, involved removing part of her esophagus and the cancerous tumour within it, before reconstructing her stomach to form a new esophagus and reattaching it into the upper part of her chest.

Although it is an operation that has been performed many times, it’s the first time viewers have been given the chance to experience for themselves a surround view of the operation as it happens.

The procedure has been condensed into a four-minute video produced by Cancer Research UK to give the public an insight into the surgery that some patients with esophageal cancer like Janet undergo as part of their treatment.

Only around one in three people diagnosed with this type of cancer—which is especially hard to detect until it is at an advanced stage—are able to have the surgery.

Professor Tim Underwood, Professor of Gastrointestinal Surgery at the University, was awarded a £1.4m grant from Cancer Research UK to carry out a ground-breaking piece of research which he hopes will lead to the development of better treatments.

Using a high tech system called drop sequencing, Prof Underwood and his team are now able to examine cancer cells removed from patients in microscopic detail to determine the genetic makeup of the tumour environment.

So far 20 patients have taken part in the research in Southampton.

Prof Underwood said: “This 360-degree film gives people the chance to immerse themselves inside a theater during major surgery—something that has previously been hidden behind closed doors. We want to break down that barrier and show people what we are doing and how the money they raise for Cancer Research UK is helping us advance in finding better treatments for patients in the future.

“The real magic happens after surgery—which is in many ways the easy bit—when we get the specimens back to the lab. By understanding more about the cancers we are removing we can develop more targeted and effective treatments that will give patients personalized care.

“We have reached a very exciting place—we are ahead of where we thought we would be in terms of the research and we are optimistic of what this could mean for cancer patients in the future.

“I am extremely grateful to each and every patient who has agreed to help us with this vital piece of work so far. My hope is that in years to come, survival rates for patients with esophageal cancer could double as a result.”

Despite her starring role in the film, mum-of-two Janet from Alton, north Hampshire, says she felt “strangely removed” from what she was seeing on screen, but that she hoped by agreeing to be filmed, it would help shape future treatments.

Janet, who is now cancer free but continues to have treatment, said: “I think it’s really important, not only to give people an insight into what happens to a patient undergoing treatment and what they can expect, but also to show why research and the work being done by Cancer Research UK is so vital for patients like me in the future.

“I feel very lucky to have had the opportunity to be treated here in Southampton, where we have world class facilities and experts all in one place.”

Michelle Mitchell, Cancer Research UK’s chief executive, said: “This 360-degree video gives us a unique insight into life-saving cancer surgery, enabling us to explore the operating theater with its state-of-the-art equipment as if we are present in the room.

“The work we are funding in Southampton—led by Professor Tim Underwood—enables esophageal cancer tumors to be removed from patients and instantly transported to on-site laboratories where they can be examined in incredible detail in a bid to understand their complete genetic make-up and discover what causes them to grow. Right now, this is helping our researchers to explore new ways to treat the disease.

“We are extremely grateful to Janet for agreeing to her operation being filmed in this way and we’re delighted that she is recovering well from her procedure.”

In 2015, around 9,200 people were diagnosed with esophageal cancer in the UK. It’s the 13th most common cancer in adults.

Oesophageal cancer is more common in men than women.