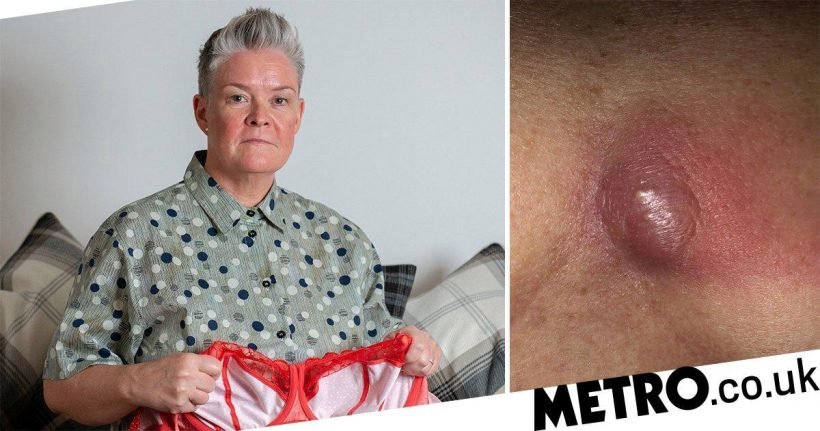 If you’re fidgeting around with a bra that’s poking you in the ribs, Lynne McConnell’s story might give you a nudge to head out and invest in some new underwear.

Lynne, 51, says she’s been left with a gaping hole in her chest after wearing underwired bras that were too tight.

Lynne, who has 34GG breasts, started wearing close-fitting bras 15 years ago, after being measured at a shop. The bras always felt too tight, but Lynne was told by shop assistants that they were fine, so she kept on wearing them… until she noticed a lump in the middle of her chest.

What started as a pea-sized lump grew to a rock-hard mass measuring 4cm across in a matter of days.

Lynne went to her doctor’s office, where she was first diagnosed with an abscess caused by an infection. When antibiotics didn’t work and she was in ‘agony, Lynne went to her local breast clinic, where she was diagnosed with a cyst that had to be cut out. After surgery she was left with an open gaping hole in her chest that took three months to heal.

Warning: This article contains images of an open wound that some may find distressing.

Lynne claims her surgeon told her the underwired bras had put pressure on a gland, which blocked and led to a cyst.

She’s sharing her story to urge people to keep an eye on their chests and be careful with bras that feel too tight.

Lynne, from Brighton, said: ‘There is a lack of awareness about these types of bras.

‘Something has clearly gone wrong and all I want is for people to learn from what has happened.

‘I don’t want anyone else to go through what I have. It really affected my self-esteem for a long time.

‘I couldn’t wear a bra for weeks and I try to take pride in how I look. It wasn’t nice at all.’

Lynne says she frequently returned to shops to complain that her bras were too tight, and often put tissue underneath her bras to add some comfort.

But she kept wearing the uncomfortable items because shop assistants said they fit her correctly.

Lynne said: ‘It had become particularly uncomfortable to wear a bra and the lump was growing quickly.

‘By the time I went to the breast clinic it was really painful. I went in at 3pm and left within two hours. The surgeon just cut it out there and then.

‘It was just too tight. I always said it was too tight but they just told me that’s how it should fit.

‘It was uncomfortable but I just listened to them. The staff insisted that’s how tight they need to be.

‘The surgeon said the pressure of the bra caused the gland to get blocked.

‘I was always told to have it really tight. I raised concerns that they were too tight but I was just told that’s the size that fits me.’

Her wound wasn’t able to be stitched up and took three months to heal, requiring daily dressing.

Now, Lynne’s scar is still tender and she can only wear wireless sports bras.

She wrote to the retailer to complain, but was told last month that neither bras nor the fittings at the store were to blame.

According to British Skincare Foundation dermatologist, Dr Adil Sheraz, tight clothing such as underwire bras can cause cysts.

‘They are lined with epithelium, a layer of cells, that often forms the ‘sac’ which will contain semi-fluid material, which often has the appearance and consistency of cottage cheese.

‘Cysts form when cells start multiply inwards rather than being shed on the surface.

‘Why some people form cysts is not entirely known however they can often be caused by a blockage at the site of a hair follicle opening, as a
result of a blocked pore or even injury to the skin.

‘Occlusion of pores which may occur from pressure or tight garments could potentially cause formation of cysts.’