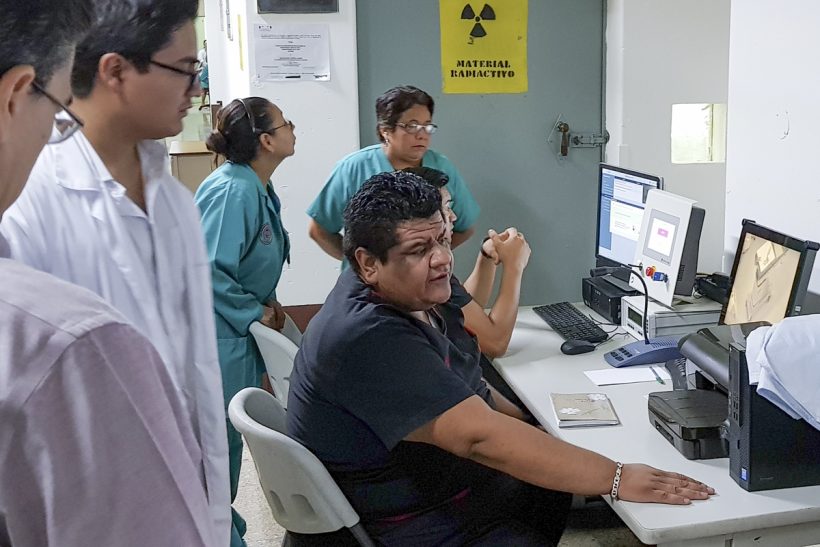 Radiation therapy is one of the most effective and affordable cancer treatments, and an important therapy for more than half of all cancers. Yet startup costs keep it out of reach for many people in countries with limited resources to provide high-quality medical care. The technology is built to treat thousands of patients a year, but before patients can be treated, the machines must be purchased – and they start in the millions of dollars.

In Guatemala, about a quarter of all cancer patients are cared for at Liga Nacional Contra el Cancer/Instituto Nacional de Cancerologia (LIGA/INCAN) in Guatemala City. It is the country’s only comprehensive cancer treatment center for the poor and underserved. The institute cannot meet the needs of all of its patients, even with two radiation therapy machines. Every year, hundreds of people die before ever receiving treatment.

Now, with the assistance of a grant from the United States Agency for International Development (USAID)/American Schools and Hospitals Abroad, an international team is set to vastly improve cancer care at the institute. The group represents a partnership between LIGA/INCAN and Washington University in St. Louis’s radiation oncology department and Global Health Center, a part of the university’s Institute for Public Health. The team is in the process of buying and installing a state-of-the-art radiation therapy machine at the institute, enabling thousands of patients who otherwise would get delayed treatment to receive the same high-quality radiation treatment that is available in the United States. The project is made possible by the generous support of the American people and their commitment to improving health around the world.

“This project is a great example of the university’s efforts to improve global health,” said William Powderly, MD, the J. William Campbell Professor of Medicine and the Larry J. Shapiro Director of the Institute of Public Health and director of the IPH’s Global Health Center. “USAID funding is helping to bring much-needed technology to a part of the world that lacks the resources to provide superior cancer care to the many patients who need it.”

The radiation therapy equipment at LIGA/INCAN is decades old, making it less effective at treating the cancer and more likely to cause side effects. Recent improvements in the technology focus the beam of radiation directly on the tumor, reducing the likelihood that healthy tissues surrounding the tumor will be harmed.

“Radiotherapy services are an important auxiliary for health, since they provide curative or palliative care for patients with malignant neoplasms or benign growths that are not treatable with other procedures,” said Vicky Fuentes de Falla, MD, the president of Liga Nacional Contra el Cancer. “This equipment opens up the possibility of treating patients who were previously ruled out from radiotherapy treatment.”

A few years ago, radiation oncologists from the School of Medicine – who have been working for nearly a decade with counterparts at LIGA/INCAN on clinical outcome research studies and training clinicians in global health – assessed the radiation therapy equipment at the institute and determined that an upgrade was desperately needed. But without money, the project went nowhere. Then, Powderly told them about a USAID fund to provide assistance to medical centers outside the U.S.

“We are trying to have a global impact on cancer care,” said Dennis Hallahan, MD, the Elizabeth H. and James S. McDonnell, III Distinguished Professor of Medicine, and head of the Department of Radiation Oncology. “We officially incorporated global health into our mission about three years ago, and we have been developing partnerships with cancer centers around the world. This grant from USAID, along with the help of Varian and several partners, allows us to install a new radiation therapy machine in Guatemala like what we use here at Siteman Cancer Center to treat our patients.”

The machine is a Varian Halcyon radiotherapy system, and it is designed to expand the availability of high-quality cancer care globally. The system can offer advanced treatments for lung, prostate, breast, head & neck, and many other forms of cancer. Halcyon only requires the technician to take nine steps from the start to the end of treatment compared with about 30 steps with older technologies, making the process simpler and potentially faster. Best of all, it could provide treatment to four times as many patients as the institute’s timeworn equipment.

“We are proud to partner with Washington University on this project and of having a Halcyon system installed in Guatemala,” said Chris Toth, president of Varian’s Oncology Systems. “At Varian, we are committed to creating a world without fear of cancer and increasing the access to care. We look forward to this system being installed and delivering much-needed cancer care to patients in Guatemala.”

Having identical machines at Siteman Cancer Center – part of Barnes-Jewish Hospital and Washington University School of Medicine – and in Guatemala will make it easy for St. Louis-based doctors, medical physicists and technicians to train their Guatemalan counterparts in using the new technology.

“Our goal is to enable the doctors in Guatemala to treat their patients at the same level that we treat our patients here,” said Sasa Mutic, PhD, a professor of radiation oncology and vice-chair of medical physics and clinical strategy. “We are replacing 40-year-old technology that allows them to treat a handful of patients per day, with a system designed to address high-capacity needs of cancer clinics. We’re committed to providing advanced training to their radiation oncology teams for as long as necessary so they can provide the best possible care.”

Other partners also are playing an important role. LIGA/INCAN is preparing a custom-built area to house the new machine. One of the old radiotherapy machines has been decommissioned to make way for the new equipment, but it leaves behind a dangerous amount of radioactive cobalt. The U.S. National Nuclear Security Administration is making an in-kind donation by disposing of the hazardous material from the old machine, which is a critical part of the project’s success. BJC HealthCare, the health system that includes Barnes-Jewish Hospital on the Washington University Medical Campus, also is donating equipment to the project.