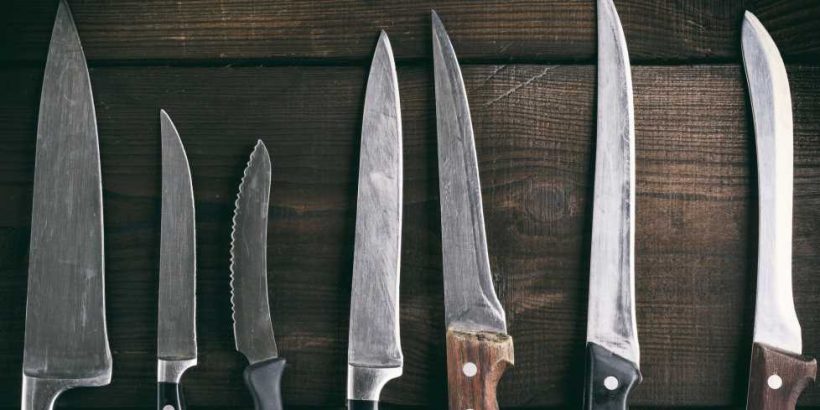 Right now, at this very second, someone in the world is about to purchase a 16-piece knife set for someone that they love. But if they really, truly loved this person, they would pause, consider the action they were about to take, and put away their method of payment.

You see, we home cooks can’t stand clutter in the kitchen. Clutter breeds confusion. Clutter impedes cooking efficiency. Clutter means more things that we have to maintain, clean, and store.

This is why every time you gift us a Star Trek pizza cutter, a pair of onion goggles, or pretty much anything on lists like these, we tend to do that thing where we force a smile and say “Oh cool, this is so cool,” and secretly wonder to whom we can promptly re-gift this ultimately useless piece of cooking crap.

And this sentiment is especially true—and perhaps most powerfully intense—when it comes to the 16-piece knife set. To give you a fuller picture, here’s what goes through our heads when we unwrap the thing.

Holy f*ck, Aunt Edna. Here I am thinking, by the size of the box, that you were giving me a leg of Jamón Ibérico. But now, instead of being in possession of wondrous amounts of impeccable pork, I own a cheese knife, a bread knife, something called a utility knife, two pairing knives, and—oh, no way—eight steak knives? When the hell am I going to have eight people over for steaks? The only way I would be able to afford that scenario is if I somehow re-sell this $800 set for full price to some schlub who doesn’t understand that 90 percent of these knives are completely useless. And now I’m feeling terrible, because you’re so well-intentioned, Aunt Enda, and always generous, but so, so, so, so, so, so misguided.

You only need one knife in the kitchen, really, and that knife is a chef’s knife.

Okay, yes, a pairing knife is handy for little kitchen tasks, such as removing the stem nub out of a tomato or peeling the rind off citrus, but a chef’s knife can perform these jobs, too, if not in slightly different ways.

You also absolutely don’t need that giant honking knife block that comes with the set either. To use home cooks, countertop space is vital and knife blocks are like cookie jars, microwaves, and other one-trick-pony cooking gadgets in that they gobble up vital prep space.

A high-quality chef’s knife, hung on a simple magnetic strip, are really all a seasoned home cook ever needs—or even wants. Even a top-on-the-line, super-durable, always-sharp, carbon steel chef’s knife, like the Zwilling J.A. Henckels Bob Kramer Carbon Steel Chef’s Knife costs hundreds of dollars less than that knife set. Victorinox also sells a pretty dang good one at an even less expensive price.

This is all to say that good home cooks likely already not only know all this, but they already own a great chef’s knife. Buying them another is well-intentioned, but, really, redundant.

So, Aunt Edna, as much as I love your kind and gentle spirit, next year how about that leg of Jamón Ibérico?

And, while you’re at it, a subscription to Men’s Health?