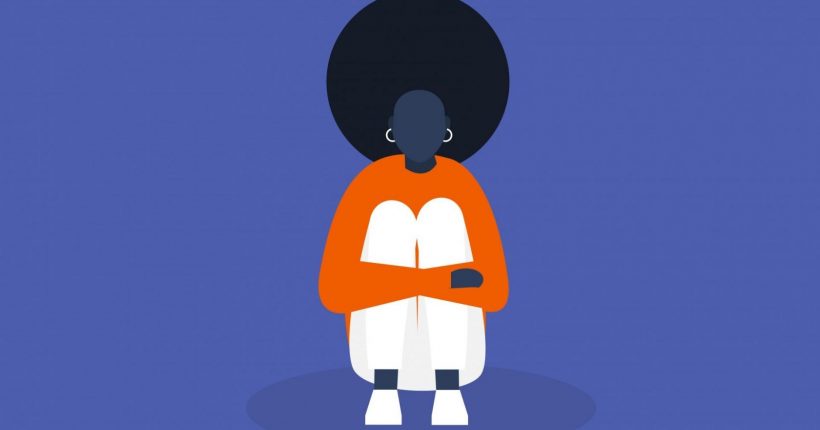 Do you find it hard to stop being overly self-critical, or silence negative thoughts? A therapist explains why we’re so hard on ourselves and how to prevent it.

“Be kind to yourself.” It’s a phrase we use a lot. We see it on social media, it’s repeated by therapists or told to us by the people who love us most. But, practising self-love and kindness is easier said than done, especially when you’re constantly bombarded with negative thoughts that just don’t seem to shift.

A lot of us are dogged by negative thoughts, sometimes known as the voice of our inner critic. They can be pervasive and overly self-punishing; making us overanalyse and ruminate on minor mishaps pr chastise ourselves with harsh, punitive judgement even when we’ve done nothing wrong.

Being able to look at ourselves critically isn’t always a bad thing, but when negative thoughts overwhelm us, they can impact our wellbeing and our life choices, grinding us down and dashing our self-confidence.

“If we don’t stop it, our inner critic can be so destructive, it weighs us down,” says Frederique Murphy, a leadership mindset strategist and author of Lead Beyond The Edge: The Bold Path To Extraordinary Results.

“But there are reasons as to why we can be so harsh on ourselves and understanding why our brain reacts this way is the first step to silencing those inner negative thoughts.”

Here, Murphy explains why we have a tendency to be so hard on ourselves and what we can do to try and combat it.

Why are we so hard on ourselves?

It’s all to do with the Positive Negative Asymmetry or the Negativity Bias in our brains. In simple terms, the brain will assign more weight to negative things than positive things.

“We could spend a wonderful afternoon with a friend and have a great time for three or four hours, but then that friend might say a tiny little sentence that felt negative to us and afterwards we will focus on that few seconds when the negative thing was said, rather than the entirety of the four hours,” says Murphy.

A new author, for example, could receive hundreds of positive reviews, but it’s the one negative review that they’ll remember.

This tendency for us to focus on the negative is built in – we’re born with it.

“It’s what we call an evolutionary hand down, we’ve been thinking like this all the way back to when we were cavemen,” says Murphy. “This was actually a protection mechanism. Negativity at the time of cavemen meant danger, which meant life or death. So, to protect us, the brain said we have to be extra aware of negative things because they can kill us. This got built-in and now, centuries later, we’re still born with it.”

How does our negativity bias play out?

Murphy cites research from Daniel Kahneman, a Nobel Prize-winning economist and psychologist, who discovered that each day our mind registers around 20,000 moments.

We do this all day long and, generally, our brains will quickly disregard neutral moments and categorise other moments as either positive or negative. How we categorise these moments is the difference between us having a good or a bad day.

Can we change our negativity bias?

This means when we start to think negatively, because it is so deeply ingrained, much of it happens in our unconscious mind.

“We often think one of the strategies to dissuade negative thoughts is to ignore them or put them at the back of our mind,” says Murphy. “But if you put something at the back of your mind, it holds space and energy and it controls you. It becomes part of the unconscious mind and that inner critic can take total control over you and become destructive.”

In other words, when we repeat narratives to ourselves such as “I can’t do this”, “I’m not good enough”, “I’m a failure”, “I’m ugly”, “I’m stupid”, they become ingrained in our unconscious mind and we start to believe them.

However, according to Murphy, it is possible to rewire our brains for success.

“There’s a myth that when we reach adulthood, our brain is set and we cannot do anything about it anymore. But it’s been proven in the last couple of decades that this is not true,” says Murphy.

In fact, science has realised our brain is very malleable, something called neuroplasticity, which means we can rewire it to new ways of thinking and change our behaviours.

How can we rewire our brains to silence our inner-critic?

Murphy recommends a three-step strategy, which she calls “The Three S’s”. Initially she recommends performing them back-to-back.

“This is where we stop and catch ourselves in the act of negative self-talk,” says Murphy.

When we stop, Murphy explains, we give a direct command to our brain that we a putting the brakes on our negative talk and taking charge. “It needs to be a command,” she says. “This direct comment interrupts the behaviour and disrupts it.”

Thought-stopping is a cognitive strategy first introduced in the 1950s, Murphy explains. The more we do it and interrupt our usual thought patterns, the less we have to do it as we create new paths in our brains.

Repetition is really important, she adds, because the more you counteract negative thoughts the easier it will become.

This is the process of writing out the inner dialogue we’re struggling with. It can be a good way to facilitate the first ‘stop’ step.

This works best when we write it out by hand, according to Murphy, as the brain reacts best to the tactile impact of the pen against paper.

“Our inner dialogue can often be a jumbled mess in our head, especially if it’s deeply ingrained,” says Murphy. “When you start writing it out, often called expressive writing, it makes us more aware of what is going in our heads.”

In scientific circles, this is called ‘affect labelling’. According to Murray, seeing our thoughts on paper them clearer and can diminish the intensity of our feelings.

“We have research from when the brains of people who were suffering from their inner thoughts have been scanned,” says Murphy. “When the participants started to write out their thoughts on paper, their amygdala – almond-shaped structures in our brains that help regulate our emotions – visibly calmed down.”

“Sleep is incredibly important for our brain to function properly,” says Murphy. “When we sleep it consolidates everything that happened during the day and starts tying things together.”

“When we are tired, the amygdala in our brain is triggered like alarm bells, which means we think we’re in danger and we can become overwhelmed by negative thoughts.”

If negative thoughts are keeping you awake, Murphy recommends a five-minute exercise: writing out five things we’re grateful for that day.

“I usually write, ‘I’m grateful for’ and then start with a verb in the ‘ing’ form, for example: ‘I am grateful for running 5k today.’ This shifts our brain to gratefulness and positivity,” says Murphy.