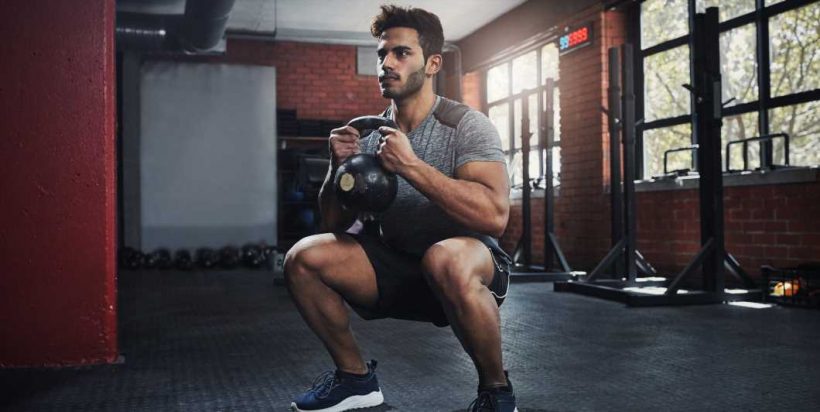 Most guys focus on training their upper bodies hard, attacking chest workouts, arm workouts, and ab sessions with fierce vigor. But here’s a secret: If you want all that superheroic torso training to be worthwhile, you’ve got to spend serious time building those wheels, too.

Leg day training can be brutal (although, thanks to Crossfit, more and more people are embracing it), but it’s completely worthwhile, perhaps more important than any other day. Training your legs challenges your entire body, for a variety of reasons. Your upper body, after all, has to hold all that weight. You can also, in general, go heavier on leg days than you can when training, say, your arms, and hitting your body with all that weight will drive a strong hormone response throughout the entire body, burn calories, and incinerate fat in the process.

Leg training’s come a long way in recent years, too. It’s not all back squats, and it’s not all big-box machines like leg extensions and curls, either. There’s a host of variety on today’s leg days. Not sure where to start? These exercises are a good bunch to master in your quest for major wheels.

There are an endless variety of barbell squat variations, but perhaps no option gives you more bang for your buck than the front squat. The front-loaded nature of the move is going to push you to develop shoulder, ankle and hip mobility, and here’s the best part of all: Your entire core has to be firing the entire time to protect your spine and make the move possible. It’s an ab workout wrapped in a leg workout.

Not far behind the front squat is the classic bodyweight squat. This is a great leg move that can go anywhere with you, and it’s trickier than you may think. Most people make the mistake of thinking squatting is about your knees and don’t sit back as much as they should. Learn to sit back and you’ll attack your glutes and hamstrings more. Bodyweight squats level up more than you think, too: Add a pause or pulse in somewhere, and you’re creating challenge without necessarily adding weight.

Consider this the king of all posterior chain-focused exercises, and a great way to pack muscle onto your entire body. Whether you’re doing it sumo style, conventionally, or with a trap bar (a underrated deadlifting method and one of the best ways to do it), you’ll be hammering your core, training your back and your forearms more than you think, and, most importantly, you’ll be challenging your hamstrings and glutes with serious load. This is destined to be your strongest lift in the gym.

First off, it’s fun to swing a weight around. Secondly, when you do it with a good-form kettlebell swing, you’re hammering your core, driving your heart rate through the roof — and piling size, strength, and power into your hamstrings and glutes. A well-done kettlebell swing builds serious lower-body explosiveness, and the oomph you get from it translates beyond the weight room, too, adding to your vertical leap, broad jump, and other more athletic moves. This one’s a must-have in your leg day library.

That’s right: We’re not falling in love with the stationary lunge too early. The walking variation is superior due to the fact that the trail leg can “step through” to the next rep. That trains the glutes more effectively and keeps the lift more dynamic in nature. On top of this, the knees take less stress forces due to less need to constantly start and stop or change direction. Start by learning basic lunge mechanics, which you can do right here.

Consider this move your ultimate squat tutor. If you’re struggling to achieve good squat depth or keep your torso in the proper upright position, doing goblet squats is a perfect way to solve those issues. You’ll learn good mechanics, and start to understand your ideal body position for a squat. One more secret, too: Holding that heavy weight high in a goblet squat will fire up your core a ton too.

Few exercises build leg strength while simultaneously challenge your balance and your leg mobility as much as Bulgarian split squats. Elevating your rear foot onto a box or bench instantly creates a challenging stretch for your quads and hip flexors on your back leg, and it places more of a balance challenge on both your front leg and your hips. It’s a great way to build mobility toward a deeper squat. Overall, you’ll smoke your quads and glutes while also sparing yourself unwanted back pain.

Sure, you want to ostracize this movement as being “not functional enough”, consider the tremendous benefits. First, it’s a great way to hit the quads with plenty more isolation than most squat variations can deliver. More importantly, it’s a joint-saving lift for lifters with their share of battle scars (think back, hip, and knee issues. Should the leg press be the backbone of your workout? Should you load it up with titanic amounts of weight and ego-lift? No. But don’t run away from the machine, either.

This is a prime hamstring builder, using free weights that you can really load up. It’s as simple as that. Perhaps the best part of the Romanian deadlift is how it prioritizes a controlled negative (or eccentric) contraction, a changeup from most leg moves (and exercises in general sometimes), which push you to focus only on lifting the weight and never challenge you as you lower the same weight.

Lunging backwards rather than forwards stabilizes the front knee. You also get to focus on the all-important posterior chain, which includes your glutes and hamstrings, instead of relying so much on your quads and hips. But a reverse lunge gets even more intense once you add a deficit by standing oni a plate or a slight platform. Now, you’re leading leg and glute work even harder to drive back onto the box, but it still all happens in a safe way.

This is a great way to bear plenty of load to challenge the glutes and hamstrings, without having to fear excessive low back or spinal stress. Since the force angle is horizontal and not vertical relative to the body, this is a tool for both healthy lifters, and those on the mend from a back flare-up. Even better, you can do hip thrusts more frequently than some other leg exercises, since your upper body doesn’t have to bear as much strain. This one’s a glute-developing go-to.

Think of the glute bridge as a variation on the hip thrust that requires only a load (think barbell or resistance band) and floor space. You’re hitting the glutes from a slightly different angle compared to hip thrusts, and involves a shorter range of motion that’s even more isolated to the glutes. Plus you don’t have to fidget around with a bench to find the best position. If you’re struggling to learn hip thrusts, step down to this and enjoy it. Bonus: You can do it anywhere, even in your living room if you’re just using bodyweight.

One of the king hamstring developers, take advantage of this piece of equipment if it happens to be in your gym. Your hamstrings have two key roles: They bend your knees, and they also help extend your hips (essentially aligning hips and torso). Your hamstrings have to focus on both things during glute-hamstring raises. Perhaps the best part: This one only requires bodyweight to drive your hamstrings to bionic levels.

Also known as the “natural” glute hamstring raise, this is a fair alternative when in a poorly equipped gym. The secret comes in the negative rep. Accentuating the eccentric by lowering yourself as slowly as possible to the ground taps into the strongest muscle fibers your hamstrings possess, and won’t fail to improve their strength. Not only is this great for leg development, but it’s even better for injury prevention; eccentric hamstring strength is key in decelerating the body.

The classic step up, when actually done with good form, is a hidden weapon for knee health, hip and glute strengthening, and unilateral stability. The key is stepping up with good form, keeping your glutes tight, and your knees turned out, not in. Do so, and you’re blending strength, flexibility, and balance into one move — and a worthwhile move no matter whether you’re a bodybuilder, Crossfitter, or general strength enthusiast.

If you want to be an athlete, you have to be strong not only when operating on two legs but also when operating on one. And few leg exercises will challenge you on one leg quite like the single-leg deadlift. You’ll hone balance, and coordination on this one, and you’ll build more core strength than you think as you work to stay in balance and keep your hips square on every single rep.

When is a sprint not merely a sprint? When you’re trying to sprint uphill. Whether you’re doing that on a treadmill or on an actual hill, you’ll be hammering your glutes and quads, and you’ll naturally be honing better sprint form, simply because of the challenge of the angle of the hill. Make sure you sprint for no more than 20 seconds at a time, though (with solid rest in between). Go much longer than that, and you’re basically just running uphill instead of actually sprinting.

More and more gyms have sleds and performance turf inside; if yours does, you should take advantage. But that doesn’t just mean pushing and pulling the sled. Attach some bands to the sled for support, lean against it, and push it in reverse. You’ll be forced to extend aggressively at the knees, a key function of your quads. Expect major quad burn.