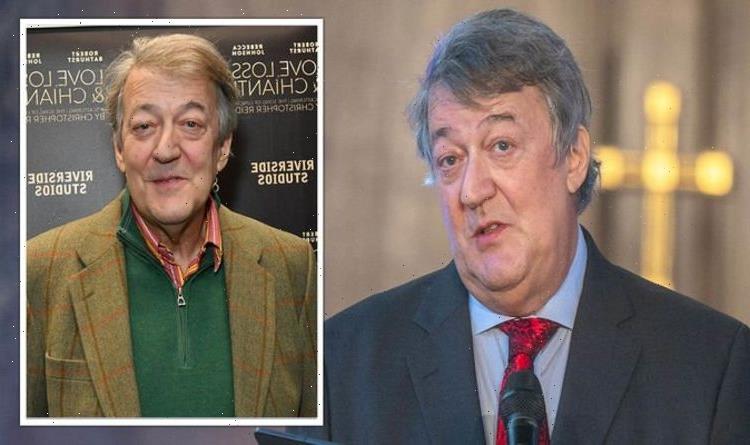 In a rare glimpse into his private life a few years back, Stephen was on a mission to urge men to get their prostates checked. The actor and comedian – who has starred in the likes of the BBCs Blackadder and QI – was diagnosed with the condition in 2018, and counts himself incredibly “lucky” to have gotten through it. Motivated by his own experience, Stephen joined a campaign run by the NHS to encourage those with potential cancer symptoms to come forward.

Talking about his experience in a film, released by the campaign, Help Us, Help You, Stephen said: “A few years ago, I was pretty stunned to be given a diagnosis of prostate cancer.

“I was very lucky because mine was diagnosed early.

“Many of us can succumb to cancers but there are symptoms that can be reported by the patient.

“So please, make an appointment with your GP if you notice discomfort in the tummy area or diarrhoea for three weeks or blood in your pee even just once.”

The campaign video also featured This Morning doctors Dr Hilary Jones and Dr Philippa Kaye, who explain the symptoms to look out for as well as why an early diagnosis is important.

Although the campaign launched in 2018, the message is still incredibly important today.

Stephen went on to urge people to not feel embarrassed about their symptoms, especially if it is to do with their genitals.

He continued: “I guess as you get older you realise you’re less embarrassed about the fact you have to check things.”

In order to treat his condition, Stephen had surgery, a decision that he looks back on as “dodging a bullet”.

Since his surgery, the star has had regular check-ups, involving blood-tests to ensure that the cancer has not returned.

Stephen continued: “Every now and then I have a blood test. And earlier this year I had some radiotherapy, which is very common once you get the thing out, you mop out any stray cancerous cells.

“I have another blood test next week, so I hope it will carry on being an all-clear. It’s been a strange experience.”

Despite his own “strange” ordeal, Stephen stressed the importance of men not ignoring symptoms – especially during the Covid pandemic.

He elaborated by saying: “It’s really important, and I do get a bit evangelical about asking men of a certain age next time they see a doctor, especially in the time of covid, to check.

“If they’re going to have a blood test then check for PSAs, as they’re called. These are little indicators in the blood that might show there is a chance that something is going on down in the prostate area.”

Despite the encouragement, new research revealed that over half of the public would be put off going to see their doctor for cancer symptoms, due to feeling embarrassed. In addition to this, 71 percent of people would only speak to their doctor about these symptoms if they were sure it was something serious.

These worrying statistics become even more of a concern as conditions like prostate cancer are more easily treatable when detected early.

Prostate Cancer UK explains that more than 47,500 men are diagnosed with prostate cancer every year – that’s 129 men every day. Due to the slow developing nature of the disease, many will not recognise signs for many years.

However, if symptoms do start to appear, they usually cause changes in the way individuals urinate. Possible changes to be aware of include the following: