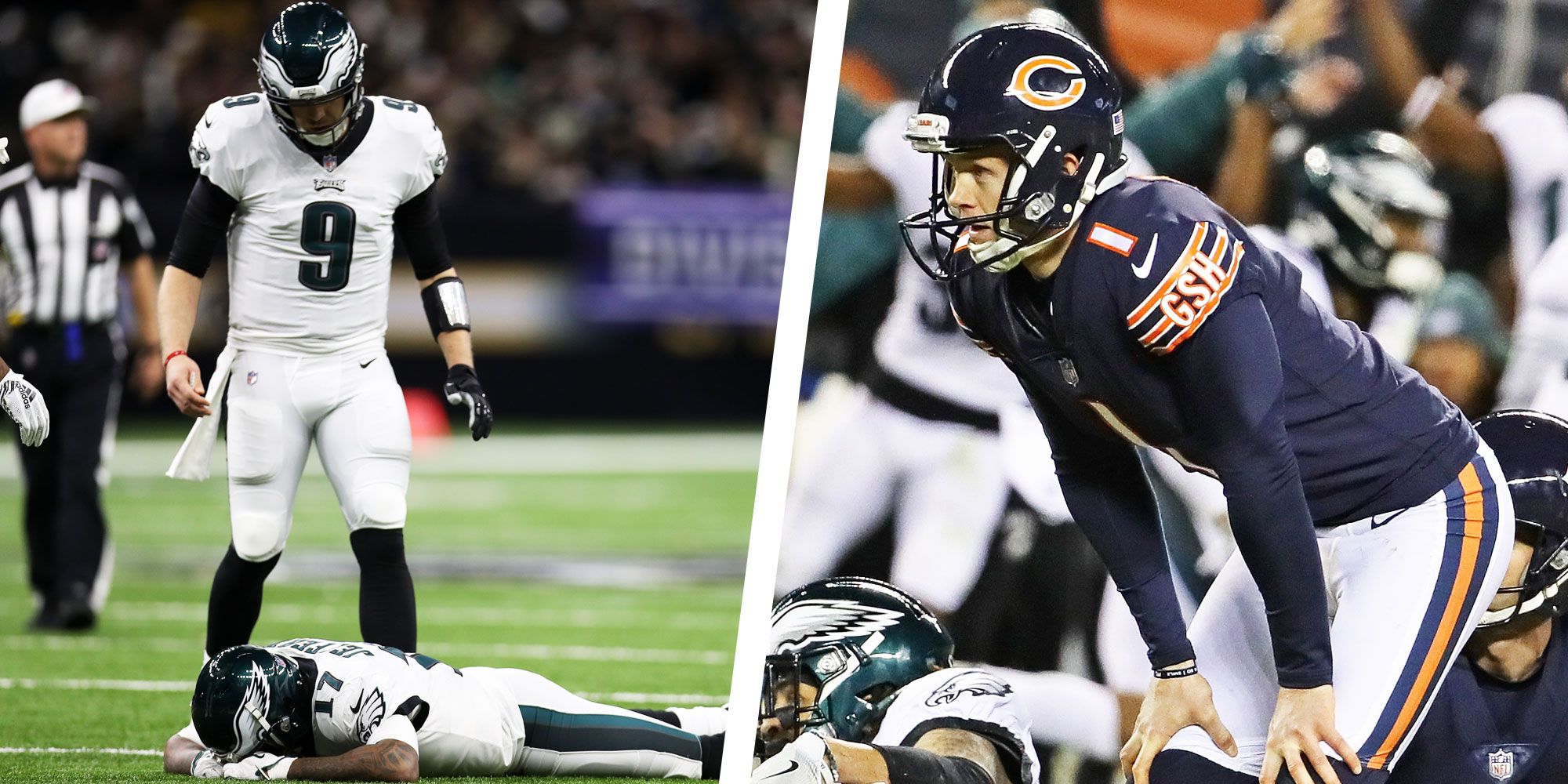 After recently missing what would have been the Bears’ game-winning 43-yard field goal, kicker Cody Parkey, 26, left the Chicago stadium beneath a shower of boos, then death threats, and now memes—all this despite the fact that the field goal was actually tipped on the line and Parkey himself scored more points against the Eagles that night than the entire Bears offense (9 vs. 6).

Whether Parkey blew the game, he certainly felt like he did, a feeling that was cosmically passed back to the Eagles last Sunday when Alshon Jeffery, one of the league’s top receivers, allowed a pass by Nick Foles to deflect off his hands and into those of corner Marshon Lattimore: Game over. Jeffery lay on the field for a solid half-minute after the play and returned to the sideline, where a red-eyed Doug Pederson immediately hugged him.

So, yeah, it’s been a tough couple weekends for athletes. Obviously, no one wants to lose a game (or think one did) on an error. And yet we’ve all been there—as players, coaches, overly emotional parents, and fans.

“You’re going to be flooded with these really uncomfortable, distressing feelings,” says Lisa M. Stephen, Ph.D., a New England peak performance coach and licensed psychologist. “Allow yourself to feel what you feel—the anxiety, the anger (with yourself, with other people)—this doesn’t have to be rational. Feel it and then look at what you’re going to do.”

So whether you happen to score points on a field for a living or can otherwise sympathize with those forlorn Eagles, get out your mental playbook and take some notes. Your mental health—and even your career—might depend on it.

If you’re a player…

Some athletes can stabilize themselves and pull through distress, while others might spiral down into negative thinking, including acute anxiety or depressive feelings, Stephen notes. How you respond to failure will dictate both momentary and long-term health as well as athletic performance. The most successful athletes will confront these obstacles by simultaneously (1) navigating and normalizing the present failure and (2) setting themselves up for future success.

“Allow yourself to feel what you feel, then look at what you’re going to do.”

The first hurtle, after the mistake and anger and frustration and long ride back home, is trying to contextualize your mistake. “Recognize that these things happen to all players in in all different kinds of situations,” Stephen advises, “and that it’s a normal part of being involved in any competitive endeavor.”

It may take some work to get there. First, you want to mitigate as much nonconstructive criticism as you can, seeking out instead reliable sources of support that can build you up, but not falsely. The key is to develop and identify true statements about yourself that contradict negative cognitions. These cognitions are beliefs such as “I have no talent. I’m a terrible player.” If you’re an athlete performing at a high level, that’s unlikely to be true. “Look at the true data,” Stephen says, like videos of yourself and game statistics. Work on a more realistic assessment: “I messed up. It happens to everyone.”

Identifying true statements also helps you to see failure as anomalistic. Failure, in your mind, should be the exception to the rule and not the rule itself, Stephen says. When you reach this conclusion, you may even begin to see failure as an essential part of your game—and to remember that even Michael Jordan missed 26 potentially game-winning shots (“I have failed over and over again in my life… and that’s why I succeed.”) Failure can make for some of the most humbling and pathos-inducing moments in sports—and ones that reveal the kind of competitor you are.

Failure, in your mind, should be the exception to the rule and not the rule itself.

For younger athletes without robust stat sheets (and even for elite ones), visualization exercises can also work to overcome game anxiety or disappointment. Visualize moments in which you’ve played well, when you were “in it”—performing at your peak. Think of this as a “success review.” (Having fun can be an important marker for these moments; when were you enjoying the performance?) See yourself when you made that three-point shot and ask yourself: How did my body feel and what was I thinking? Continue to cue your brain back to these highlights.

Now build. The most difficult part of season-ending failure is that the athlete must wait quite a while for redemption. But an athlete can use that and turn it into a kind of goal. “If there’s information to glean from the mistake or the incident,” Stephen says. “You can build that into your training: What am I working toward? What do I need to do now?”

It’s not about suppressing the mistake; it’s about contextualizing and then building from it.

Future orientation remains essential to an athlete recovering from defeat. Mistake-orientation, meanwhile, can re-release stress hormones, increase anxiety, and actually prevent you from improving athletically. “When someone is upset, their brain is not primed to learn,” Stephen says. Calming down thus becomes the first and necessary condition for any athletic improvement. It’s not about suppressing the mistake; it’s about contextualizing and then building from it, leaving stress reactions behind you. If those negative reactions persist, if you develop thoughts related to your safety, if your thoughts interfere with the ability to do other things, or if you observe an emotional digression—increased anxiety, fewer hours of sleep each night, sustained loss of appetite, more depressive emotions—seek help.

Since future performance and well-being depends so much on your reactions, it shouldn’t just be you who recognizes the importance of stemming negativity and nonconstructive criticism; your mentors should be just as committed to positivity as you.

If you’re a parent or coach…

The last thing you want to do is tear your player (or, yeesh, your kid) down. “There are very few elite athletes that I’ve ever met at any stage who are unaware of the fact that they just made a major mistake,” Stephen says. “During a game the most important thing the coach can do is re-focus that athlete on what to do, because they’re going to be focused on what just went wrong.” Getting a player back into a goal-oriented mindset keeps his head in the game where it belongs. More specifically, it keeps his head always future-focused and away from the stress and anxiety of residing in the past mistake.

You cannot compete without making mistakes.

Should the game end with the mistake, immediately begin to establish context for the player: This is what the game is all about; people make mistakes in games; you cannot compete without making mistakes. These may sound like well-worn truisms, but they also help heal. “If you’re having a strong, emotional reaction—and as a coach you will—then regulate that. Take care of that before you talk to the athlete, so that what you say is productive and helpful,” Stephen says. We all have to understand that competitions are decided sometimes by mistakes. “Adults always have responsibility to think about how they’re going regulate their own behavior and what comes out of their mouths.” Your words could run on repeat in an athlete’s mind for games to come.

Then there’s the car ride home, the potential scene of so much verbal parental abuse. Of course, every athlete is different, and if you’re wondering whether to bring up the game, check in and ask: What do you need right now? Maybe they need to pick up a ball and restore confidence. Maybe they need to be left alone. “The important thing is recognizing that this is not your game; this is your kid’s game,” Stephen says. “If you want to vent because you paid all this money for this travel league, get support, talk to other parents, blow off some steam, and then approach your child when you are more level-headed.” You can hurt more than their future athletic performance, also reinitiating stress and anxiety. And perhaps you being at the game impacted your child’s performance in the first place. This phenomenon is very real, and it’s always a good idea to check in with a coach you trust to determine your child’s athletic stressors. Don’t take it too personally, but a stressor might be you.

“In a weird way, you’re doing some mental work of your own as a spectator,” Stephen observes. So practice like an athlete. Use self-talk to re-focus your energies on other things in your life that are important, and put the game into context. It shouldn’t be the only thing that brings you joy. Make plans with your friends. Commiserate. Chat about something else.

Put the game into context. It shouldn’t be the only thing that brings you joy.

Had the Eagles scored and won, Saints fans probably would have blamed kicker Wil Lutz, who missed a field goal, setting up that final Eagles drive. The point is that blame is something easily passed around. Most losses, however, are compound losses—a series of decisions and failures at varying stages—making blame not just irreducible but irrational.

And in the case of last Sunday’s Philly heartbreak, remember the Eagles didn’t simply lose the game; the Saints, according to every metric predicting success, just won.