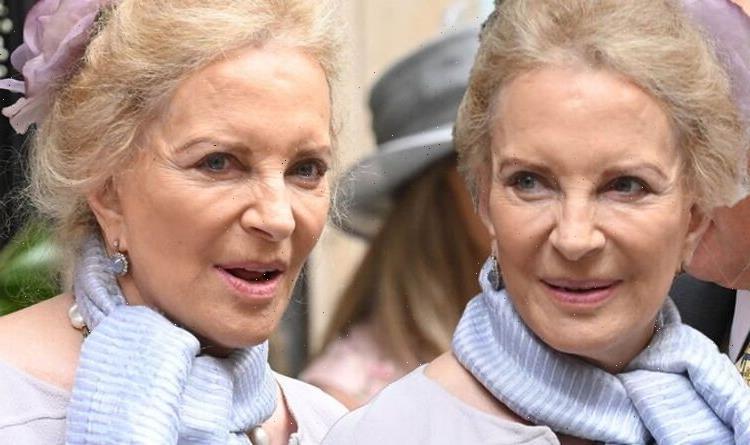 Princess Michael of Kent on waltzing with her husband in 1984

After contracting the virus in November 2020, the Princess was not seen at a public engagement until May 2021. According to reports, the 77-year-old spent the time recovering at her home at Kensington Palace after falling ill with both severe fatigue, fevers and blood clots following her infection. In May of that year, the source told The Sun: “It has been a worrying time for those around her. It has been difficult for those close to her to see her suffering. She’s really been through it.”

After three weeks of “extreme” and “regular” symptoms, the princess’s spokesman Simon Astaire released an updated statement to say that the royal was “on the mend,” after being clinically vulnerable to COVID-19.

In November 2021, the royal was then also seen at the Festival of Remembrance after missing Wimbledon in the summer, a key sign that she had managed to shake off the “difficult” health ailments she faced in months prior.

The royal was not the only royal to have suffered with COVID-19. Most recently, Camilla, Duchess of Cornwall tested positive, a couple of days after the Prince of Wales tested positive for the second time.

Due to the Prince and Duchess of Wales having only seen the elderly Queen two days before testing positive, fears for her health were immediately raised.

Aides at Buckingham Palace refused to confirm if the monarch had taken a COVID-19 test of her own, but went on to hold a virtual audience from Windsor Castle which she attended via zoom, seemingly in healthy spirits.

Aides from Clarence House declined to elaborate on whether the Duchess was suffering from mild symptoms of the virus or whether she was able to spend Valentine’s Day with her husband.

All of the royals who have tested positive for COVID-19 since the start of the pandemic, are believed to have received all of their recommended vaccinations, including Princess Michael who had two vaccinations before becoming ill.

In the same year that the royal suffered with blood clots, it was decided that Brits under the age of 30 would be offered an alternative vaccine to AstraZeneca (AZ) because of the higher incidence with the condition.

Although research showed that the benefits of getting the vaccine for older people still outweigh the risks due to the incidence of blood clots being so low and the risk posed by coronavirus so much higher for older age groups, Princess Michael was in the minority of those affected by blood clots.

Researchers at the University of Oxford found that blood clotting – known as cerebral venous thrombosis (CVT) or thromboembolic events – following a Covid infection is around 100 times greater than normal and several times higher than it is post-vaccination.

The study, led by Professor Paul Harrison and Dr Maxime Taquet from Oxford University’s Department of Psychiatry and the NIHR Oxford Health Biomedical Research Centre, counted the number of CVT cases diagnosed in the two weeks following diagnosis of COVID-19, or after the first dose of a vaccine.

The pair found that CVT is more common after Covid, with 30 percent of these cases occurring in the under 30s.

Since the discovery in March 2021 and up until August 2021, 412 suspected cases had been reported across the UK through the Regulatory Agency (MHRA) Yellow Card scheme following AZ vaccination and 43 suspected cases were after the second dose of AZ vaccine.

As of December 2021, the Joint Committee on Vaccination and Immunisation (JCVI) have found no evidence of an association of blood clotting with the Pfizer-BioNTech or Moderna vaccines, and released advice to specific age groups on the best vaccine to receive.

Data provided on February 16, showed that there are still 54,218 daily cases of COVID-19 in the UK, and 199 daily deaths within 28 days of a positive test. However, compared with the last seven days the daily positive test rate is down 26.8 percent.

Overall, over 30 million people have also received a booster or third dose of a vaccination, with the latest announcement that vulnerable children aged five to 11 years old will become the latest age group offered a jab.

On February 17, Health Secretary Sajid Javid said that the NHS in England will “prepare to extend this non-urgent offer to all children during April,” after the JCVI recommended the new rollout.

Although individuals are suffering from a variety of symptoms, the main symptoms of COVID-19 are any of the following:

For most people, COVID-19 will remain a mild illness. However, if you have any of the symptoms listed above, even if your symptoms are mild, stay at home and arrange to have a test. You do not need to take a PCR test if you have already taken an LFD test and the result was positive.