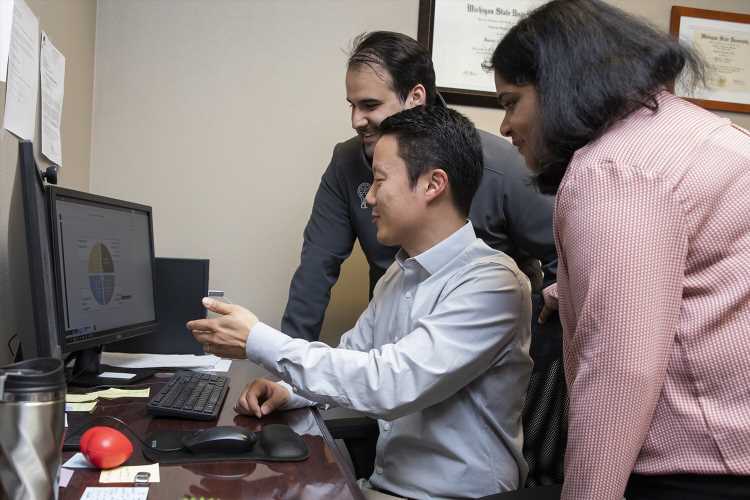 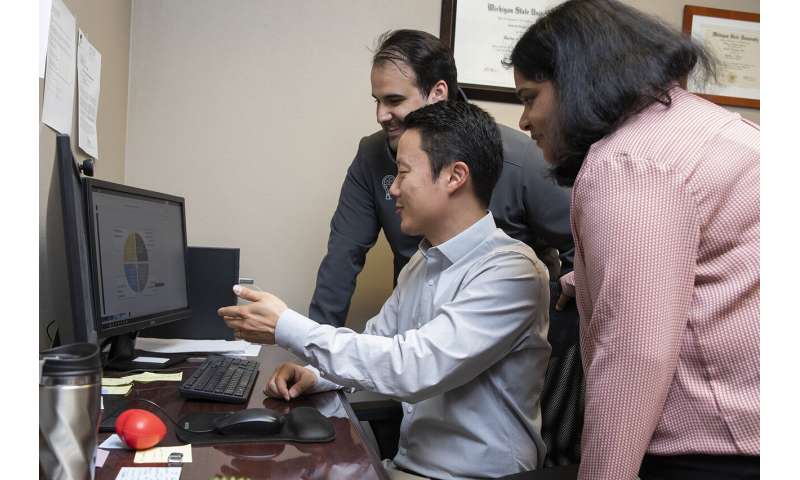 Alzheimer’s is a costly disease.

As the third leading cause of death in the United States, it accounts for nearly $300 billion in health care costs every year. With the number of Alzheimer’s patients expected to nearly triple in the coming decades, that amount is only going to increase.

Perhaps even more costly is the human experience of Alzheimer’s disease. Patients have to endure the slipping away of their own memories, their own selves. Their loved ones, unable to help, can only watch it happen, often acting as caregivers to parents, siblings or spouses who no longer know them.

Andrew Shin, an assistant professor in the Department of Nutritional Sciences’ Neurobiology of Nutrition Laboratory, is hoping to change all that. Thanks to an observation he made while studying diabetes, he now has an opportunity.

Within the last 10 years, researchers determined that a particular type of amino acids was found to be more prevalent in the blood of people with Type 2 diabetes. Diabetes, it turns out, is strongly associated with Alzheimer’s disease.

“If you are diabetic, you are at least twice as likely to develop Alzheimer’s disease later,” Shin said. “That’s why I thought there could be a link between these amino acids and Alzheimer’s.”

Because preliminary data suggests that these levels are 25-50% higher in those with Alzheimer’s disease, the level of amino acids and metabolites in a person’s blood could potentially serve as a diagnostic or predictive marker for the disease.

“Currently, when patients are diagnosed with Alzheimer’s, the disease already has progressed too much for too long—we’re talking 12 to 15 years on average,” Shin explained. “The earlier we can diagnose or even predict Alzheimer’s development in the future, the better we can prepare our mind and body, and do something to prevent or significantly delay the onset.”

The amino acids and metabolites don’t just act as markers for Alzheimer’s disease; they also could be potential targets for treatment.

“Our pilot data show that these metabolites can directly damage neurons, indicating that various strategies to lower their levels in blood would be beneficial in treating Alzheimer’s patients,” Shin said.

As it turns out, a group of compounds already in use can enhance the breakdown of these amino acids.

“As of now, the group of compounds is not even used for medicine, only in research settings,” Shin said. “We happened to come across these compounds while searching for molecular pathways involved in metabolic disorders.”

Shin’s idea is to repurpose these compounds for use in treating Alzheimer’s disease. As he explains, this innovative concept has several merits. For one, how these compounds work has already been tested and validated in the lab, and they are easily available.

“Since current drugs are not effective at treating Alzheimer’s disease, this is a huge advantage because our potential customers—pharmaceutical companies—would not need to spend millions of dollars to develop an effective compound from scratch,” he said. “Instead, they can acquire these validated compounds from us and save money and time.”

Additionally, by putting his method in the hands of pharmaceutical companies, Shin can ensure that the development and refinement of the compounds to test their efficacy and safety will be conducted by professionals in neuroscience and biochemistry.

With that in mind, Shin put together a team to enter the National Science Foundation’s (NSF) Innovation Corps (I-Corps) program to study commercialization opportunities for their idea. With the help of the Innovation Hub at Research Park, Shin, the technical lead, teamed up with postdoctoral fellow Ganga Baskar, the entrepreneurial lead. John Butler, the founder and CEO of personalized medicine platform Quantumcyte, came on as the industry mentor, helping to support and guide their progress through the program. They named the team AzTack—a mashup of “Alzheimer’s” and “attack.”

At the national level, the I-Corps program is an intense, seven-week course that helps researchers understand the process of commercializing an idea and determine the potential market for their product through interviews with industry experts.

“At I-Corps, we definitely tell them it’s not about selling their idea, it’s beginning to identify and validate problems with potential customers,” said Weston Waldo, commercialization program director for the Innovation Hub. “They were talking to the Pfizers of the world, like the research scientists and exploring the customer roles in the market ecosystem around it, and asking, “What are some of the problems you’re having with your clinical studies or your clinical research?”, and then, based on what they learned, they are able to identify how their results are a means to meet that need or if they need to pivot to another customer or idea.”

Many times, teams going through the program change or adapt their ideas based upon the feedback they receive. As the AzTack team progressed through the program in the fall of 2019, instead of changing their idea, they became increasingly assured of the need for a new strategy to combat Alzheimer’s disease.

“Currently there is no cure or effective treatment for Alzheimer’s disease,” Shin said. “Today, only two drugs approved by the U.S. Food and Drug Administration (FDA) are prescribed to treat Alzheimer’s symptoms—they address symptoms, not the root cause –and even this lasts only 1-2 years. Hundreds of billions of dollars are invested and spent in developing novel drugs and running clinical trials without positive or promising outcomes.”

Hundreds of new drugs in development target the same two molecules, amyloid beta and tau, that experts admit may not be the best focus, Shin explained.

“The group of compounds we are testing aims at a completely different target, so we hope this new strategy can potentially slow down the progression of Alzheimer’s disease,” he said.

At the end of the I-Corps program, the NSF challenges teams to decide whether their product is ready to move forward—what they call a “Go” decision—or not, a conclusion that should be supported by their interviews.

“If teams are a “Go’ decision, they have multitudes of funding and grant resources they can take advantage of that require I-Corps as the prerequisite to even apply,” Waldo said. “So while the NSF doesn’t determine whether the teams move forward—the evidence from the customer discovery is the deciding factor—it does have a lot of support for those teams that decide to.”

Shin says at this point, the team needs to collect more data. To support that, they’re planning to apply for some federal small-business grants. The Small Business Innovative Research and Small Business Technology Transfer programs are two such funding sources Shin’s team could now take advantage of.

“From the I-Corps program, Andy’s team now has the commercialization evidence that is needed to determine whether they should start a company,” Waldo said. “These are additional grant dollars Andy could receive to help close that gap even more between his lab at Texas Tech and the customer.”

Another option is that if a pharmaceutical company was excited about Shin’s research but needed more information to validate the model, they could collaborate through a grant called Partners For Innovation. Together, Shin and the company could submit a grant proposal and potentially receive $550,000 for 18 months.

“With enough promising preclinical data, we can take this to clinical trials and ultimately obtain FDA approval to treat Alzheimer’s patients,” he said. “But that’s a long way from now.”

Waldo says one thing many researchers learn through the I-Corps program is that they might not even need to go through the FDA approval process.

“They look at how far they need to take the research or the technology to be acquired by a larger company, like Pfizer or Eli Lilly,” Waldo said. “Sometimes, they find a connection and, at a very early stage, these big pharma companies could come in and say, “We think this idea is really innovative, we love your research results, we’re going to license the intellectual property and take it the full way ourselves.'”

Waldo explains that for large companies, it can be cheaper to buy a small company that’s already begun the research than to start from scratch.

For researchers, this can mean a significant return with relatively low risk. Especially for researchers generally unfamiliar with technology commercialization, that’s a welcoming message.

“If you’re committed to do the work, and if you can allocate the time to go through the I-Corps training, you can really go far,” Waldo said. “If you take a passive approach and are not really that interested, it can be challenging to see significant commercialization results. But for the ones that do, the ones like Andy, who really put their heart into the process, who are willing to explore options and ask questions and talk to others to learn, they can achieve something really amazing.”

Looking to the future, Shin is definitely excited by the possibility of making a difference in such a massive societal problem.

“Currently there are more than 5 million older individuals suffering from Alzheimer’s disease in the U.S. alone, and this is projected to increase to 14 million by 2050,” Shin said. “Our research and findings will potentially be able to help millions of Alzheimer’s patients and save billions of dollars of national medical costs.