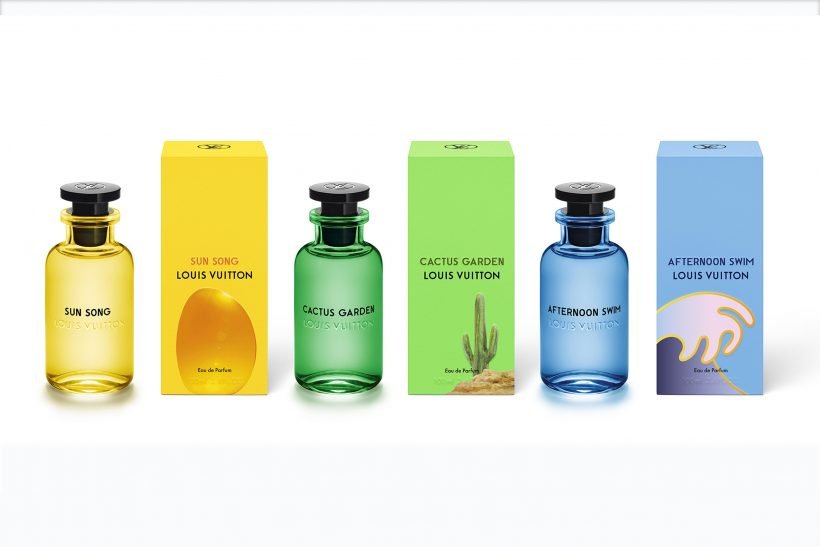 CALIFORNIA DREAMIN’: Louis Vuitton’s trio of new fragrances has a Los Angeles connection in more ways than one.
Nearly three years after dipping back into the world of scent, the luxury label is collaborating with L.A.-based artist Alex Israel, who designed the fragrances’ outer packaging. The boxes come in saturated yellow, green and blue, with renderings of a sun, cactus and wave, respectively.
Israel’s work also adorns two monogram Vuitton travel cases created to hold the perfumes, plus a shopping bag — each available in limited editions.
L.A. inspired Louis Vuitton master perfumer Jacques Cavallier Belletrud, as well. “I love L.A. For me, it is the city of freedom,” he said, adding the City of Angels fits into the brand’s journey theme, too.
Cavallier Belletrud’s three latest fragrances are fresh — a new olfactive territory for Louis Vuitton. “I have always been obsessed with freshness in my career,” he said, explaining the idea was to make cologne-like perfumes.
For Sun Song, which comes in a yellow flacon, Cavallier Belletrud said: “I tried to put the sun in a bottle with this perfume.”
Cactus Garden has a green bottle. “I’m quite fascinated by cactus, because it’s dry outside and wet on the inside,” he said. “I love the contrast, and built the perfume like that.”
Afternoon Swim’s flacon is blue. “I wanted a shot of vitamin C in the fragrance, something full of energy,” continued Cavallier Belletrud.
Although the new scents include numerous notes traditionally associated with eau de cologne, they are eau de parfum, with a long-lasting quality.
“The idea is to bring colors in a very dark world,” said Cavallier Belletrud, of the fragrances, which are due out on April 11 in Louis Vuitton’s own stores.
Source: Read Full Article