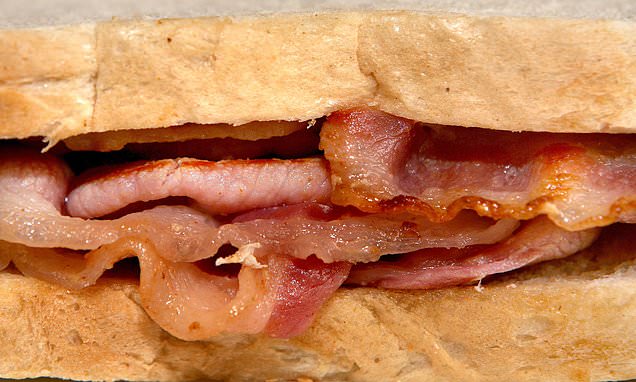 Yes it’s been linked to cancer, but if meat producers stop using dangerous nitrates and we eat it in moderation… there could be a way to save our bacon

As if we didn’t have enough on our plates! We’ve hardly begun 2019 before being hit with yet another cancer scare story about food.

MPs and scientists are calling for bacon and other processed meats — such as chorizo and salami — to have a class of chemical additives removed because they are believed to cause an estimated 6,600 cases of bowel cancer in the UK every year.

The culprit is nitrites, which are used during the meat-curing process as a preservative.

Crucially, too, they add an alluringly tangy taste and a shopper-seducing fresh-pink hue.

But the controversy isn’t just a simple issue of yet another dangerous food additive. The debate is central to our love of consuming cheap, tasty and filling foods, no matter what the possible cost may be to our health.

And, of course, the food industry loves us for our weaknesses because it makes billions of pounds.

Scientists have known about the health risk of nitrites in cured meats for more than half a century.

But consumers have not been sufficiently alert to the danger, or have preferred to do nothing about it. 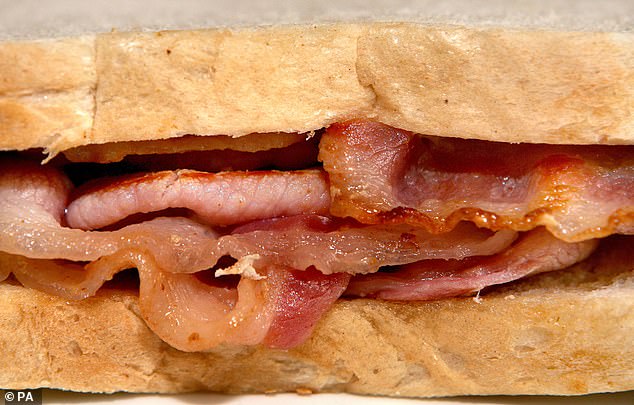 In 1956, British scientists, Peter Magee and John Barnes, tested the safety of nitrite-type chemicals — because they were also being used by dry-cleaners.

Their findings showed nitrites cause liver cancer in rats. By the Seventies, other researchers revealed that repeated nitrite doses — at the levels consumed by people who regularly eat bacon — caused numerous tumours in animals.

By the mid-Nineties, nitrites were also being associated with human cancers such as brain tumours.

A bigger threat to the key ingredient of the Great British Fry-Up came in 2012 when researchers reported in the British Journal of Cancer that a daily bacon sandwich or a single sausage, equivalent to an average serving of 50 grams, was associated with a 19 per cent increase in risk of pancreatic cancer.

And then, in 2015, World Health Organisation (WHO) scientists classified bacon and other processed meats as a Group One carcinogen.

This top-level danger classification meant the world’s leading scientists were convinced nitrites cause cancer — and bowel cancer in particular.

The WHO warned that eating bacon and other cured meats may cause an extra 34,000 cancer deaths a year worldwide.

Experts warned that merely consuming a daily couple of rashers of bacon or one hotdog — again, around 50g — would raise the risk of bowel cancer by around a fifth.

The medical doctor and science journalist, Michael Mosley, has put it more starkly. He believes that every bacon sandwich you eat knocks half an hour off your life.

The WHO’s findings were enough to cause a panic. In the ensuing fortnight, British supermarkets reported bacon sales had plummeted by £3 million.

However, the ‘killer bacon’ crisis promptly abated. After all, it’s very hard to ponder a theoretical danger of potential ill-health when faced with a bubbling rasher of salty, savoury pleasure.

The fact is that UK bacon sales are back in the pink. Not only have they rebounded, they have risen by five per cent in the two years up to mid-2016.

However, nearly all bacon on supermarket shelves contains worrying nitrites which are the key to making cured meats so cheap and attractive.

The primary reason for their use by industrial meat processors is that they kill dangerously persistent food-poisoning bacteria which can cause lethal illnesses such as botulism.

Such bugs might survive if only treated with salt — as was practised by meat-curers for centuries to provide food through winter.

Apart from acting as a preservative and giving meat that alluring pink colour, nitrites also give bacon its characteristic ‘extra’ flavour — that special tang some might call ‘metallic’, while other fans simply call it ‘bacony’.

We can detect it a mile away — it’s the perfect briny waft of a traditional full British breakfast — an irresistible aroma that’s proverbially the downfall of countless vegetarians.

What are nitrites and nitrates?

The salts of nitrite and nitrate are commonly used for curing meat and other perishable produce.

They are also added to meat to keep it red and give flavour, while nitrates are used to prevent certain cheeses from bloating during fermentation.

Nitrate is found naturally in vegetables, with the highest concentrations occurring in leafy vegetables like spinach and lettuce.

It can also enter the food chain as an environmental contaminant in water, due to its use in intensive farming methods, livestock production and sewage discharge.

Nitrite in food (and nitrate converted to nitrite in the body) may contribute to the formation of a group of compounds known as nitrosamines, some of which are carcinogenic – ie, have the potential to cause cancer.

In 2015 the World Health Organisation warned there were significant increases in the risk of bowel cancer from eating processed meats such as bacon that traditionally have nitrites added as they are cured.

The current acceptable daily intake for nitrates, according to the EFSA, is 3.7 milligrams per kilogram of body weight per day.

These sensory seductresses have, over decades, become our expected norm. Indeed, the cured-meat industry fears that shoppers would stop buying bacon if it suddenly started to appear wan, white and flavourless by comparison with the chemically enhanced competition.

Does that mean we are stuck with nitrites?

The Italians think not. A quarter of a century ago, ham-curers in the hills around Parma decided to remove the chemicals completely from their world-famous products and revert to traditional methods that use only salt.

In 25 years since producing the chemical additive-free version of Prosciutto di Parma, not a single case of botulism has been associated with its consumption.

Nor has its colour been affected. Parma products now get their attractive deep-rose hues harmlessly — as a result of natural biochemical reactions that accrue during the hams’ 18-month ageing processes.

The production time means the product isn’t cheap. Indeed, foodies are happy to pay the premium for artisan products such as Parma hams, not least because it guarantees quality and exclusivity.

But industrial food-producers fear that changing their manufacturing techniques would be a culture shock to consumers used to cheap and abundant food that’s made fast and with a conveniently slow best-before date.

As for cancer fears? We are surrounded by cancer scares nowadays. Social media is full of daft, crazy and irresponsible claims.

Of course, most people are sensible enough to ignore them.

But the nitrites-in-bacon scare comes on the back of a host of pointless and stupid cancer warnings from supposedly reliable official sources.

For example, New Year in 2017 brought us an official warning from the UK Food Standards Agency (FSA) that burnt toast and roast potatoes could cause cancer — because burnt bits contained a chemical called acrylamide.

This was despite the fact that people working in factories filled with acrylamide show no increased cancer risk. What’s more, Cancer Research UK’s own experts called the FSA’s evidence ‘weak and inconsistent’ at best.

Every new cancer scare, of course, creates fear, then confusion . . . but, ultimately, apathy.

So we ignore the warnings and think, like Homer Simpson: ‘Mmm, bacon . . . tasty, cheap!’

However, in the case of nitrites, that may be tragic, because the worrying evidence is real, and we can all take steps to avoid it.

Meat industry proponents often dismiss concerns about nitrites by saying there are plenty in supermarket green vegetables — and no one’s calling for a ban on lettuce.

Yet, the scientific evidence indicates something dangerous happens when nitrites are used in meat processing.

The additives react with red meat to form cancer-causing chemicals called N-nitroso compounds. These are reported to damage the cells in the lining of our bowels, and may, indeed, lead to cancer.

Of course, we are exposed to a host of cancer-causing compounds every day of our lives.

Overall, though, the common-sense response is to reduce that exposure — and particularly when it’s no bother to do so.

So rather than shunning all bacon, we might easily cut back. Dietitian Helen Bond, spokeswoman for the British Dietetic Association, says: ‘It seems sensible to eat fewer cured meats, but let’s keep this in perspective — moderation is key, and such products contain important nutrients such as vitamin B12 and zinc.’

Most importantly, we could all use our consumer power. As far as the meat industry is concerned, MPs and scientists can call for a ban on nitrites in bacon until they are blue in the face.

The truth is Big Food, the giant manufacturing cartels, has, for years, used its lobbying power to bat off such pressure with ease.

But it’s an entirely different matter when shoppers start voting with their trolleys. For nitrite-free bacon alternatives are already on the supermarket shelves.

The technology was invented ten years ago by a Spanish scientist who discovered that adding fruit extracts to pork maintains its pink loveliness.

Last year, an Irish company, Finnebrogue, used the technology to launch nitrite-free bacon and ham in the UK in stores such as Sainsbury’s, Waitrose and M&S. It’s not cured, technically, and doesn’t keep as long as nitrite-cured bacon if left out of a fridge.

However, it can be produced quickly and without too much additional expense. Meanwhile, High Street discounters such as Aldi are pushing down prices by stocking their own.

Of course, we all remain free to stick with a daily bacon butty full of the cheaper nitrites — even if might seem like a rasher decision.