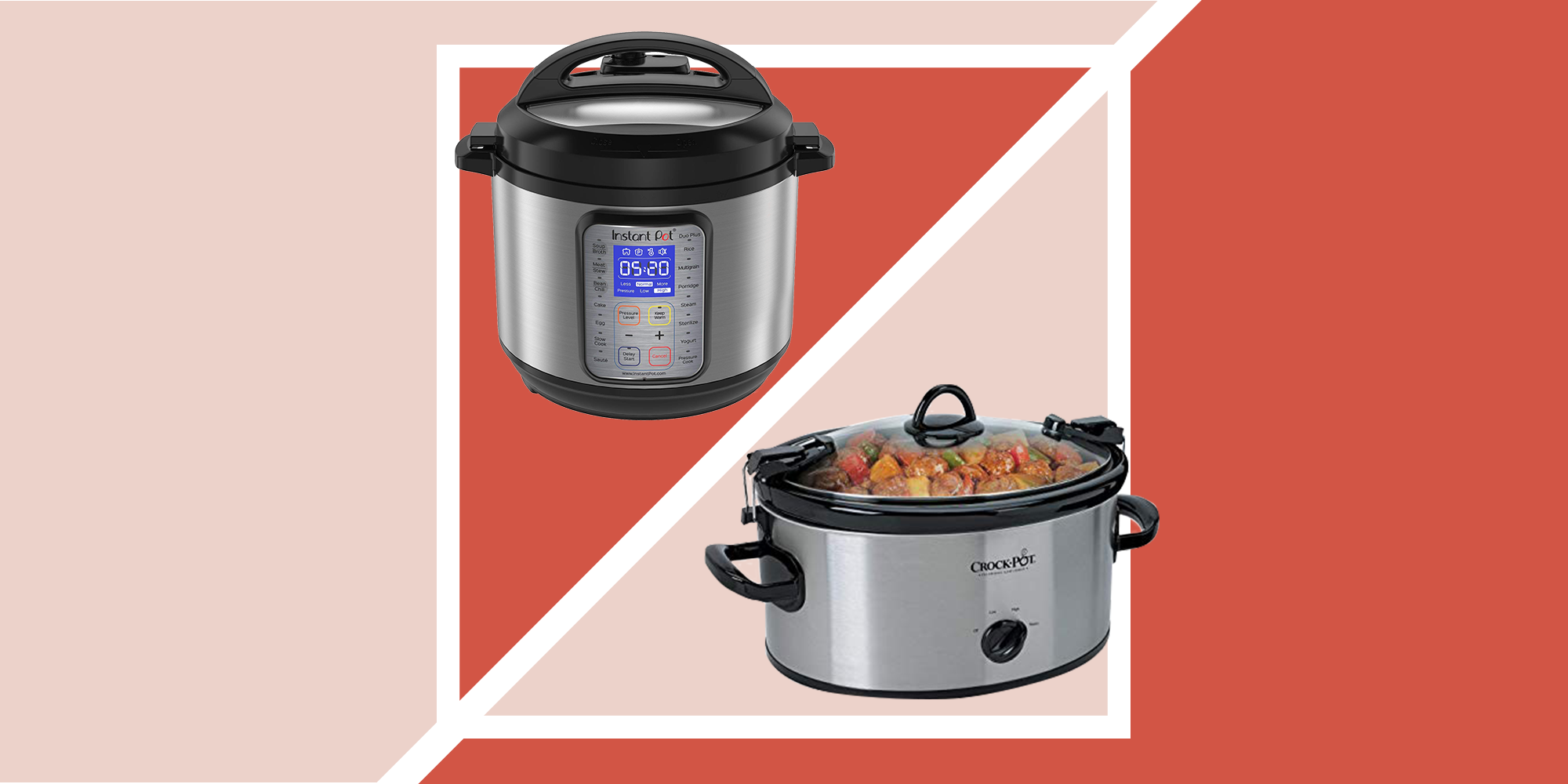 ICYMI, the Instant Pot is basically everywhere these days. But…rewind for a sec: How is an Instant Pot different from the Crock-Pot that’s been in your mom’s kitchen since, like, forever? Is one truly superior, or are the one-pot counterparts totally interchangeable? Help!

A little background: Slow cookers have been around since the 1950s, but the iconic Crock-Pot didn’t hit the market until the 1970s when it became a huge hit, according to Business Insider.

Instant Pot, on the other hand, debuted on the kitchen scene in 2010. According to Forbes, the appliance has been dubbed the “souped-up Crock-Pot for a new generation,” and it makes sense: Both are countertop multi-cookers with the ability to cook everything from stews to stuffed peppers. The best part? You get to walk away while they’re working their magic.

But the two appliances have some key differences.

Crock-Pots work by slowly heating your food at a constant temperature—so you can prep a meal in the morning and it’ll be all cooked by the time you get home. The slow cooking process makes it perfect for dishes like roasts and soups. With a Crock-Pot, you can program it to cook from 30 minutes up to 20 hours, depending on the recipe, according to their website.

The Instant Pot, on the other hand, is an electric pressure cooker, which means it cooks foods faster by controlling the pressure within the pot. In fact, according to their website, it can speed up cooking by two to six times, while using 70 percent less energy.

If you’re cooking a meat or soup recipe in the Crock-Pot and it calls for an 8-hour cook time on low, then the same recipe will only cook for 25 to 30 minutes in the Instant Pot, according to The Spruce Eats.

The Instant Pot, however, has settings for a wide range of specific cooking tasks, including making soup, cooking meat, sautéing, rice cooking, steaming, and making yogurt. (That’s why it’s touted as a 7-in-1 device. Some have as many as 10 cook settings.)

That said, Crock-Pot has created the Crock-Pot Express Crock Multi-Cooker, which boasts some Instant Pot-like features, including buttons for yogurt, beans/chili, soup, rice/risotto and poultry. Several other brands are also riding the Instant Pot craze, and have created appliances with similar functions.

The CrockPot is way cheaper.

On the other hand, the Crock-Pot has been around long enough that it comes in a wide variety of colors and sizes, plus a lower price point. An 8-quart manual version goes for $31.49, while the Crock-Pot Express Crock Multi-Cooker is $85.05. If you want to add a bit of flair to your countertop, then you might also love the 2.5 quart purple polka dot Crock-Pot for $14.99 (it’s adorbs).

If you compare the Instant Pot to the Crock-Pot, you’ll notice:

How do the reviews stack up?

Some people adore the Instant Pot because it cooks fast, others—like yours truly—kind of like the fact that the Crock-Pot takes its sweet ol’ time, and can be left to simmer all day.

Amazon reviewers noted that there were a few perks to the Instant Pot that they simply couldn’t pass up, like its multi-functions.

“I have replaced my rice cooker and egg cooker, and put my large Crock-Pot into storage,” one reviewer wrote. “This thing does all those things, and more.”

While another reviewer said the quality of the food in the Instant Pot was better: “Seriously, I can’t believe the flavor of the food. “

They added: “The chicken was tender, the carrots were not mushy, and the flavor was incredible. When I used a Crock-Pot, everything I made was mushy and tasted the same.”

As for ease of use, the classic Crock-Pot is pretty self explanatory, but the Instant Pot requires some quality time with the manual. Women’s Health writer Karen Shimizu replaced all of her cookware with an Instant Pot and noted:

“The hardest part about getting started with the Instant Pot was, well, getting started with it. The thing has a control panel with 20 different labels, and the product manual felt as technical as the one for my station wagon. I finally put it away and instead referred to the introductory chapters of my two cookbooks, which helpfully zeroed in on the buttons I would use most.”

Which is best for you?

It’s kind of impossible to go wrong with a one-pot meal of any type. After all, it has simplicity worked into it’s name—you just toss a bunch of ingredients into a singular vessel and call it a day.

But if you’re wondering which appliance best suits your kitchen style, it really comes down to function and how much time you have on your hands.

Bottom line: Both the Crock-Pot and Instant Pot are great to have when you want to knock out a healthy recipe but don’t have all day to spend in the kitchen. Either way, they’ll make your at-home cooking a whole heck of a lot easier!