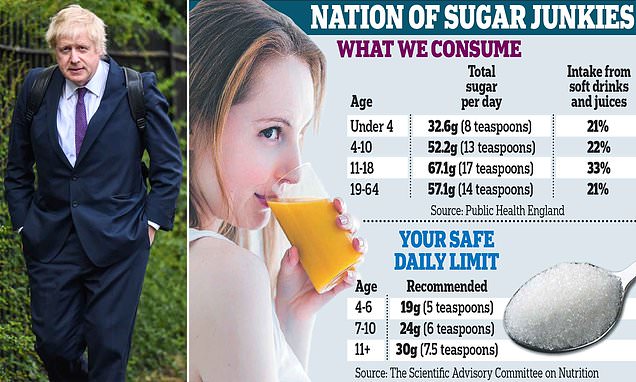 Just ONE drink of fruit juice or sugary tea a day can dramatically increase the risk of cancer, major study suggests

Just one glass of fruit juice or sugary tea a day significantly raises the risk of cancer, a major study suggests.

Experts last night warned that people are being ‘conned’ into thinking ‘natural’ fruit juice is healthy – even though it is packed with sugar.

Researchers found every 100ml serving of pure fruit juice consumed each day- whether freshly squeezed or sold in a bottle – increases the odds of developing cancer by 12 per cent.

And drinking the same volume of sweetened soft drinks – such as cordial or fizzy pop – increases cancer risk by 19 per cent.

Doctors said the study – which tracked more than 100,000 people in France – strengthens the case for robust Government action to cut consumption of sugary drinks. 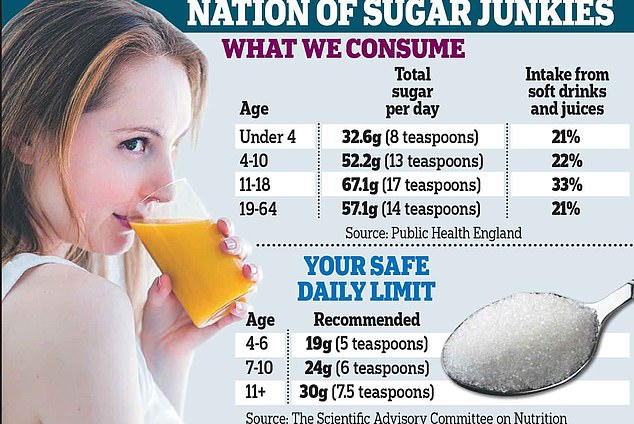 Sugar intake is nearly three times the recommended limits for people of all ages, according to Public Health England figures.

And soft drinks are the biggest source of sugar in the diet of children and teenagers, providing 33 per cent of sugar intake for 11-to-18-year-olds – which ministers admit is among the highest level in Europe.

This includes fruit juice, which makes up 10 per cent of sugar intake for this age group.

The researchers, from the Sorbonne in Paris and the French Public Health Agency, said strong policies to cut intake of sweet drinks could even cut cancer rates.

The researchers proposed some biological mechanisms to explain how fizzy drinks could lead to an increased risk of cancer.

Based on previous research, it could be because sugar adds to fat stored around vital organs such as the liver and pancreas, which leads to the growth of tumours, even if the person is of a health weight.

The glycaemic load also has an effect on blood sugar levels and inflammatory markers, both of which are linked to increased cancer risk.

It may be related to obesity, which is a well-known risk factor for various types of cancer.

The findings add to an overall picture of the importance of the current drive to reduce our sugar intake, due to excess sugar being a key driver in many health issues – diabetes, obesity and tooth decay, for example.

The academics, writing last night in the British Medical Journal, said: ‘These data support the relevance of existing nutritional recommendations to limit sugary drink consumption, including 100 per cent fruit juice, as well as policy actions, such as taxation and marketing restrictions targeting sugary drinks, which might potentially contribute to the reduction of cancer incidence.’

They added: ‘Of note, despite their overall healthy and natural image in the general population… 100 per cent fruit juices generally contain high levels of simple sugar – 10.3 g/100 mL in this study, sometimes higher than regular soda.’

The team tracked 101,257 people who were aged 42 on average at the start of the study and were followed up for an average of five years.

Their intake of more than 3,000 different food and drink items was assessed at the start of the study and every six months, with each person completing at least two 24-hour dietary questionnaires.

The results showed that for each 100ml per day, a person’s cancer risk increased by 18 per cent.

For fruit juice the increase was 12 per cent and for sugar-sweetened drinks it was 19 per cent. Artificially sweetened drinks, such as diet pop, resulted in no increased risk.

Experts last night criticised the marketing of fruit juice around the world as a ‘healthy’ product – warning that the drinks are packed with sugar, whether they are added artificially or not.

Professor Nikolai Petrovsky, of Flinders University in Australia, said: ‘The population continues to be conned into thinking that “natural” automatically equates to “healthier” which is simply not the case.

‘High sugar natural fruit drinks, which are flourishing worldwide and being marketed as a “healthier” option’ by juice and smoothie companies, can be just as bad if not worse than the carbonated drinks they are attempting to replace, as in many cases they can have an even higher total sugar content.’

Obesity is a known cause of 13 different types of cancer but the new study found even slim people were at increased risk if they drank sugary drinks or fruit juice.

The team said being overweight ‘might not be the only drivers of the association between sugary drinks and the risk of cancer’.

They pointed to other research which suggested that sugary drinks promoted body fat around the abdomen, even if a person is of a healthy weight, which in turn promotes the growth of tumours.

Other explanations for the link between sugary drinks and cancer could be the high glycaemic load of sugary drinks, they said.

WHY WHOLE FRUIT IS A BETTER OPTION

Fruit juice often contains as much sugar as fizzy drinks, even if none is added.

The products assessed in the study contained an average of 10.3g of sugar per 100ml of liquid, compared with 10.9g for drinks with added sugar.

Because the sugar in fruit juice is natural, people believe it is healthier than added sugar – but it still contributes to obesity, Type 2 diabetes and tooth decay. That is because it is in a ‘free’ liquid form which is rapidly absorbed by the body.

Whole fruit, on the other hand, is considered to be much better for health because although it contains just as much sugar, it takes time for the body to break down the solid substance of the fruit.

Whole fruit also contains fibre – or roughage – as well as vitamins and minerals which are good for your overall health.

Dr Graham Wheeler, senior statistician at Cancer Research UK, welcomed the study but stressed that very few people would get cancer as a result of drinking sweet products.

‘Participants were followed on average for about five years, and 22 participants per 1,000 developed some form of cancer,’ he said.

‘So this means if 1,000 similar participants increased their daily sugary drink intake by 100ml, we’d expect the number of cancer cases to rise from 22 to 26 per 1,000 people over a five-year period.

‘However, this assumes that there is a genuine causal link between sugary drink intake and developing cancer, and this still needs further research.’

Susannah Brown of the World Cancer Research Fund, said: ‘We recommend not drinking sugary drinks to reduce your risk of weight gain and therefore cancer.

‘Instead, rely on water to quench your thirst.’

The Government’s soft drinks levy was introduced in April 2018 – pushing up the price of soft drinks with added sugar.

The scheme is expected to be extended to milkshakes in the near future, but there are thought to be no plans to include fruit juice, which includes naturally occurring ‘free sugars’.

Health Minister Nicola Blackwood, who was responsible for introducing the sugar tax, in 2017 said British children’s consumption of sugary food and soft drinks were among the highest in Europe, adding: ‘We have developed in the UK an addiction to sugar.’

‘Being overweight can cause serious ill health – including some cancers.’

But Gavin Partington, director-general of the British Soft Drinks Association, said the study ‘does not provide evidence of cause, as the authors readily admit’.

‘Soft drinks are safe to consume as part of a balanced diet,’ he said.

‘The soft drinks industry recognises it has a role to play in helping to tackle obesity which is why we have led the way in calorie and sugar reduction.’

He said overall sugar intake from soft drinks had fallen 29 per cent between May 2015 and May 2019.

Juice and milkshake manufacturers are urged to slash sugar and calories from popular drinks to combat childhood obesity.

Drinks that are designed to be ‘consumed in one go’, such as smoothies, should contain no more than 300 calories.

PHE is also urging milkshake manufacturers to reduce their drinks’ sugar levels by 20 per cent and cap calories at 300.

Jamie Oliver’s website featured a recipe for a milkshake six times over the sugar limit just weeks after slamming the sweet drinks and calling for them to be heavily taxed.

Pure fruit juices are exempt due to them not carrying added sugar. Drinks with a high milk content are also not taxed because they contain a lot of calcium.

PHE, which is working to reduce childhood obesity, claims fruit juice alone makes up 10 per cent of the sugar consumed by four to 18-year-olds. 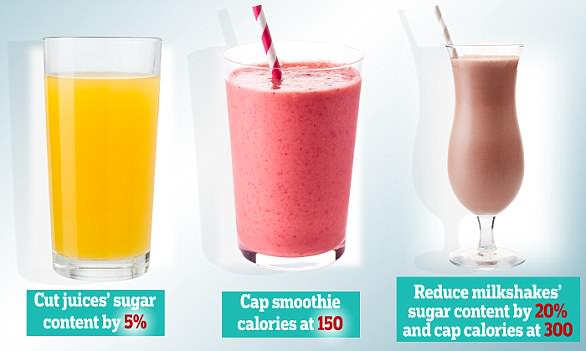 ‘Consuming too much sugar is one of the main causes of children leaving primary school overweight or obese and suffering with tooth decay.

‘The drinks industry has a key role to play in helping to tackle this by reducing the amount of sugar we buy and consume.

‘We’ve already seen positive signs from this sector and hope to see them step up even more to the challenge.’

The health body added the drinks industry can achieve its recommendations by reducing sugar in their products, making smaller portion sizes or encouraging customers to purchase lower-sugar alternatives.

PHE claims juice and milk-based drinks’ exemption from the soft drinks industry levy will be reviewed by the Government in 2020.