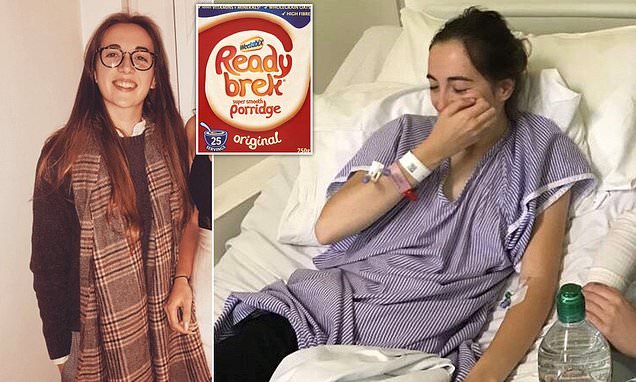 Malnourished council worker, 21, who lived off Ready Brek porridge due to a phobia of choking on food conquers her fear after being struck down with SEPSIS that she was too weak to fight

A woman so scared of choking on food that she only ate porridge has conquered her fear of eating after being struck with sepsis.

Raffaella Franza,  of Brighton, developed a phobia that eating would leave her unable to breathe following two choking incidents as a child.

The 21-year-old council worker began restricting her diet through her teenage years, convinced that even yoghurt or mash posed a risk.

When eating disorder clinics and psychiatrists were unable to help her, Miss Franza was left surviving on just Ready Brek and supplement drinks.

Doctors believed she was so malnourished she was unable to fight a sinus infection, causing her to develop potentially life-threatening sepsis in hospital.

Miss Franza vowed to change her eating habits, and, within hours of a hypnotherapy session, was able to tuck into a sandwich and curry. 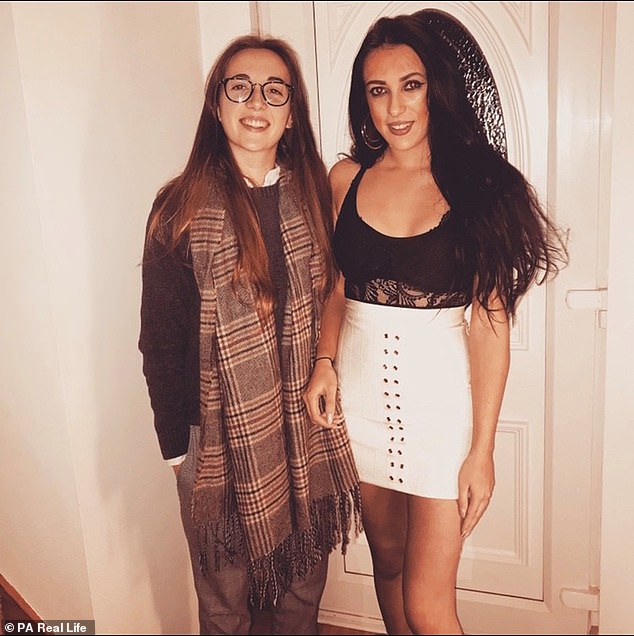 Raffaella Franza, 21, of Brighton, developed a fear that eating would leave her unable to breathe, mentally scared by two choking incidents as a child. (Pictured with her sister, Valentina, before she was hospitalised with sepsis) 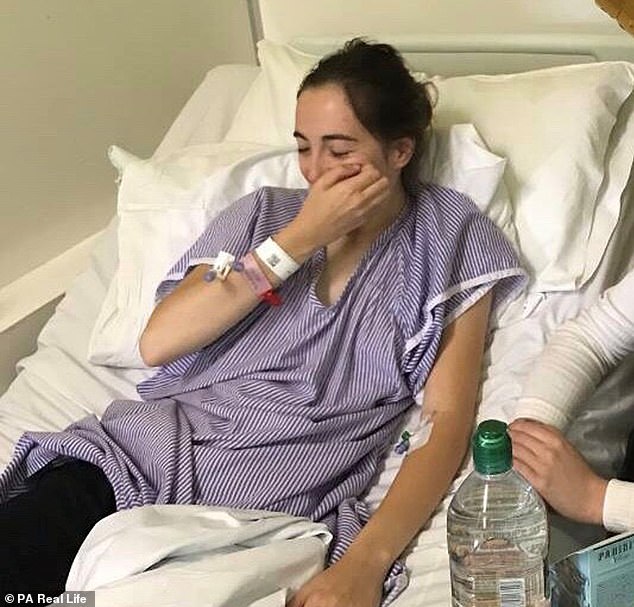 Doctors believed Miss Franza was so malnourished she was unable to fight infection, leaving her battling the potentially life-threatening sepsis in hospital (pictured)

Although she is too young to remember it happening, Miss Franza was told she choked aged two when she mistakenly swallowed a 2p coin.

She quickly coughed it back up and was physically unharmed, but she believes it left deep rooted mental scars.

Then, a few years later, she choked again on a piece of pizza – an incident she remembers graphically and believes was the trigger for her mounting terror of swallowing solid food.

Miss Franza said: ‘Choking on the pizza was very frightening, but I didn’t actually struggle with my eating right away. That came later and built up over time.’

As she grew older, Miss Franza’s phobia intensified, reaching its peak when she was around 16.

CAN YOU HAVE A PHOBIA OF CHOKING?

There are different variations of being fearful of eating. It may be the inability to swallow for fear of choking, which may lead to the rejection of most solid foods, or food aversion, where certain food textures or odours cause nauseous feelings or even vomiting.

These phobias are not associated with eating disorders.

The kind of eating phobia which is due to a fear of choking, is often linked with extreme sensitivity of the ‘gag reflex’ and a gross exaggeration of the ‘tight throat’, or ‘lump in the throat’ response that some people have to anxiety.

Patients usually present with a history of intense fear to swallow food or drinks after a traumatic event of being choked but it may also be seen without such an event.

It can be present in agoraphobics or in those suffering from extreme general anxiety.

People with this problem may feel incapable of swallowing any solids, and may exist on some variation of mush or baby food, or even liquids alone.

Choking phobia is a relatively uncommon phobic disorder, according to psychiatrists.

She said: ‘I’d be eating and, even if it was the tiniest mouthful of food, I’d become absolutely convinced that I was choking.

‘I’d really panic and start sweating. It got to the point where I was so afraid that I went completely off my food anyway and wouldn’t feel like eating.’

At first, Miss Franza tried to manage her phobia as best she could, pushing herself to still eat a couple of square meals a day.

Over the years, she also consulted various specialists, including a psychiatrist and an eating disorder clinic, but said that nobody was able to offer her help.

A choking phobia is not linked to eating disorders, which is caused by a disturbed body image view, and is not common – the figures on its prevalence are unclear.

‘I’ve seen so many people to try and get this sorted, but it never felt like I was quite in the right place. Technically, I don’t have an eating disorder, so the clinic wasn’t able to help,’ Miss Franza said.

‘At my worst, I simply didn’t want to eat. There was nothing anybody could have done to make me.’

By 2018, Miss Franza’s fears were so extreme that she was eating nothing but Ready Brek porridge, having ditched all solids.

She said: ‘I’d take these supplements called Fortisip to try and make sure I was getting nutrients, but I couldn’t handle any solid food.

‘Even things like mash or yoghurt would sometimes be too thick. I’d mainly have porridge, watered right down with loads of milk.’ 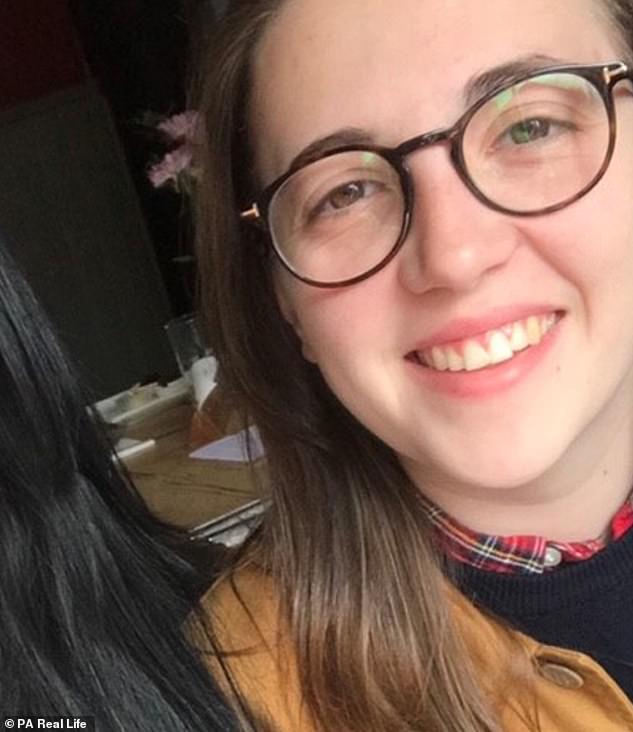 Battling sepsis gave Miss Franza a wake-up call, and she vowed to change her eating habits. Within hours of a hypnotherapy session, was able to tuck into a sandwich and curry 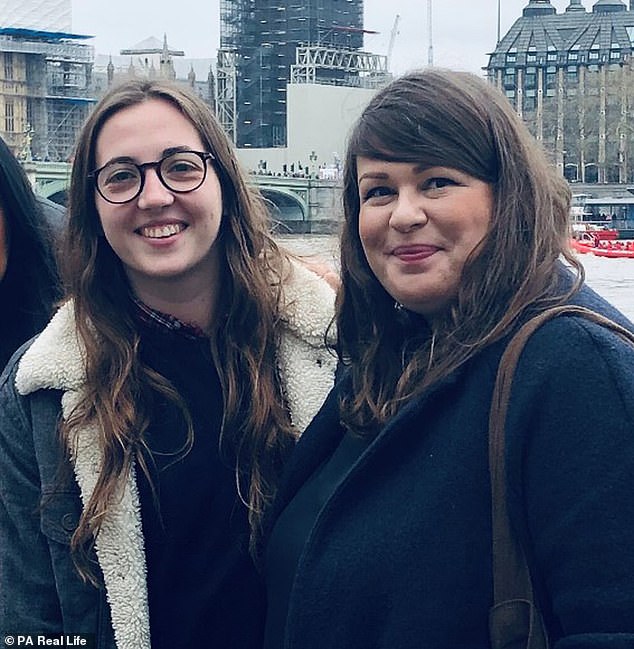 Miss Franza’s health quickly went downhill after she suffered flu-like symptoms and was diagnosed with a sinus infection in September 2018. Pictured, with her partner, Karina, in April

Then, in September 2018, Miss Franza began feeling run down with flu-like symptoms.

Visiting the doctor, she was given a diagnosis of sinusitis – swelling of the sinuses, usually caused by an infection.

But within a couple of weeks, after sharply declining, she was eventually raced to hospital, barely conscious.

There, doctors diagnosed her with sepsis, a serious complication when the body attacks itself in response to an infection that can lead to multiple organ failure.

She spent a few days in hospital recovering, in which time she gained perspective on the harm her choking phobia was doing.

‘They told me I was malnourished. I had absolutely nothing in my system to fight back with,’ Miss Franza said.

‘I made a vow while I was still in hospital to change. My phobia was nearly killing me, when I was only in my twenties. It was an awful mindset to be in.’

For a couple of weeks after recovering, Miss Franza tried to eat as balanced a diet as possible, but she soon felt herself returning to her old ways.

‘I could feel my body giving up again,’ she said.

At her wits’ end, Miss Franza remembered an article she had read online months earlier about Felix Economakis, a chartered psychologist and clinical hypnotherapist.

She booked a Skype appointment with him, costing £150, for May 1. Miss Franza said: ‘I went into the hypnotherapy session with virtually no hope.

‘I’m very sceptical about that kind of thing, but I was desperate. I never dreamed it would work this well. 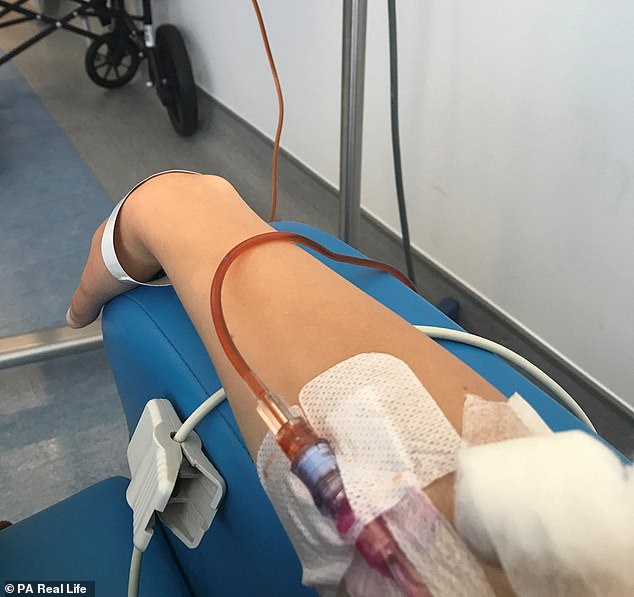 Miss Franza said her phobia of eating nearly killed her. She said: ‘They told me I was malnourished. I had absolutely nothing in my system to fight back with’. Pictured in hospital 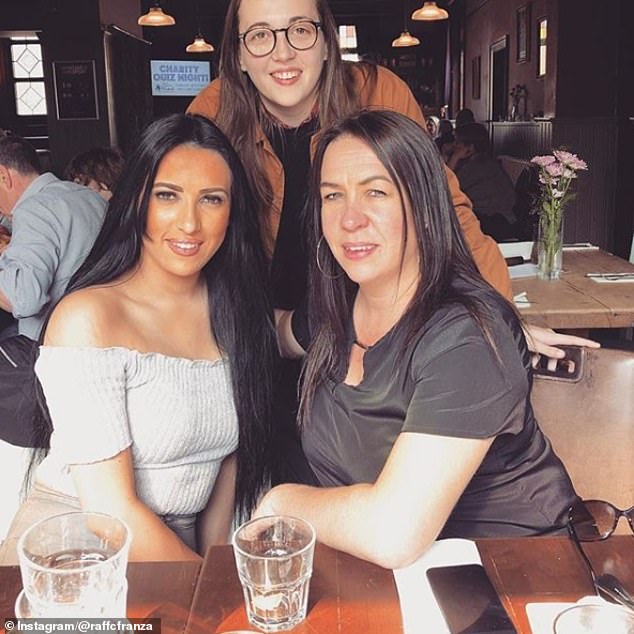 Miss Franza, pictured with her sister and mother in April, said she was shocked that she was able to eat a sandwich and curry within hours of a hypnotherapy session

‘I was told to bring along some food to my appointment, so I chose a sandwich and a banana – things I hadn’t eaten in God knows how long.

‘He said to me that by the end of the session, I’d be eating, which I found quite daunting. It was an hour long, and first we had a chat about everything, then the hypnotherapy started.’

Hypnotherapy involves talking someone into an unconscious state where they are believed to be able to process information more effectively, known as desensitisation.

It is not a method of treatment on the NHS, who may offer cognitive behavioural therapy or medication.

Miss Franza, who doesn’t recall what happened in her hypnotherapy session, said: ‘I can’t explain it, it was remarkable. At the end, I ate the sandwich and banana, then had curry and rice for tea that night.

‘This has been challenging for both me and all my loved ones, who just wanted to see me eat but didn’t want to push me.

Now, Miss Franza is feeling positive and hopes that her session with Felix will change her life for the better.

Before seeing the hypnotherapist, her phobia would limit everything, even her social life, as she found going out to eat impossible.

She said: ‘While eating solids still isn’t quite coming naturally to me, every new thing I try reinforces that I’ll be okay, and stops my brain telling me I am going to choke.

‘Little by little, I am improving my diet. I avoided so much before – parties, weddings, nights out – as I felt so uncomfortable being around food, dreading somebody asking why I wasn’t eating.

‘This really has changed everything. I know there must be others like me out there so I hope talking about it helps show them they aren’t alone.’

Sepsis occurs when the body reacts to an infection by attacking its own organs and tissues.

Some 44,000 people die from sepsis every year in the UK. Worldwide, someone dies from the condition every 3.5 seconds.

Sepsis has similar symptoms to flu, gastroenteritis and a chest infection.

Symptoms in children are:

Under fives may be vomiting repeatedly, not feeding or not urinating for 12 hours.

Anyone can develop sepsis but it is most common in people who have recently had surgery, have a urinary catheter or have stayed in hospital for a long time.

Other at-risk people include those with weak immune systems, chemotherapy patients, pregnant women, the elderly and the very young.

Treatment varies depending on the site of the infection but involves antibiotics, IV fluids and oxygen, if necessary.