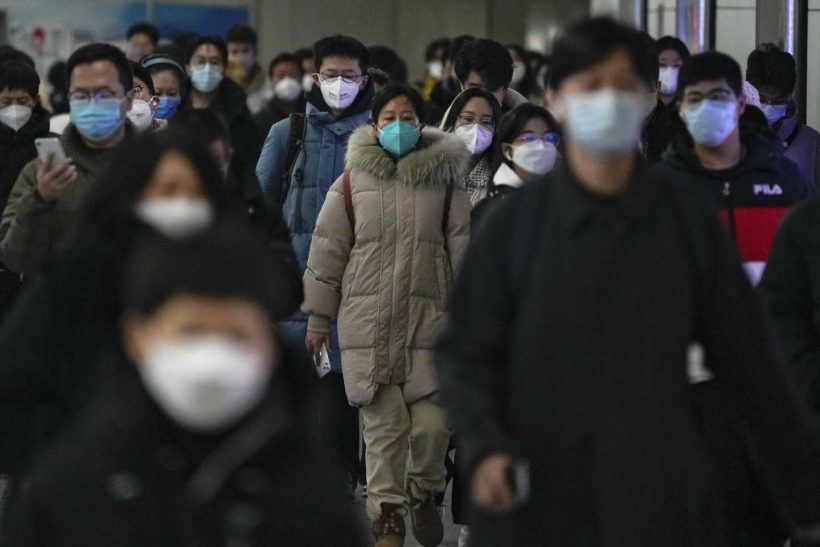 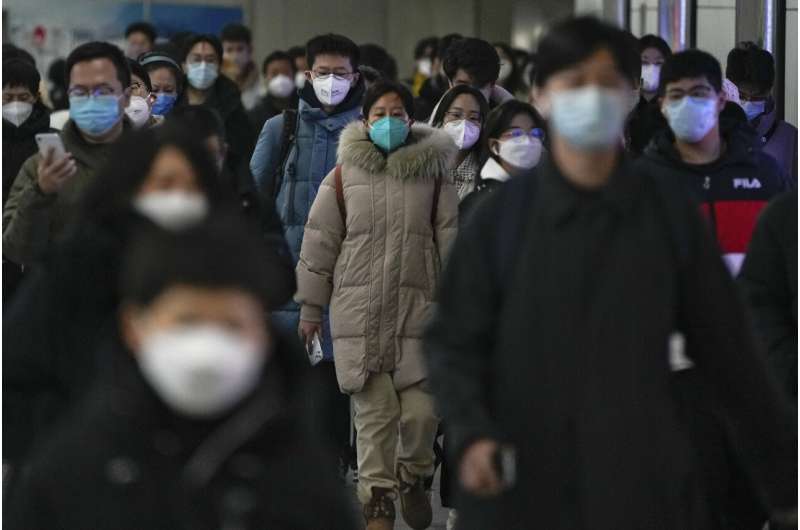 Several local governments in China encouraged people with mild cases of COVID-19 to go to work this week, another sign of the difficulty the country faces as its rollback of virus-containment measures sets off a wave of infections—and a growing number of deaths.

Health authorities reported Tuesday that five people died in the latest 24-hour period, all in Beijing, fueling concern that the toll could rise sharply after the lifting of most “zero-COVID” restrictions. The official toll likely understates the actual number, and it’s unclear how the unleashing of the virus will play out in China and whether the health care system can handle a surge in cases nationwide.

The city of Guiyang in southern Guizhou province proposed that infected people with little or no symptoms go to work in a range of sectors, including government offices, state-owned companies, medical, health and emergency workers and those in express delivery and supermarkets.

That’s a sea change from just a few weeks ago, when China’s policy was to isolate anyone infected at a hospital or government-run facility. The announcement Tuesday followed similar ones from the cities of Wuhu in Anhui province and Chongqing earlier this week. The moves appear to be in response to worker shortages that have affected medical care and food deliveries.

They also reflect the the difficulty officials face in trying to revive an economy that was throttled by pandemic restrictions, and now that they have been lifted, is being slowed by workers falling ill. 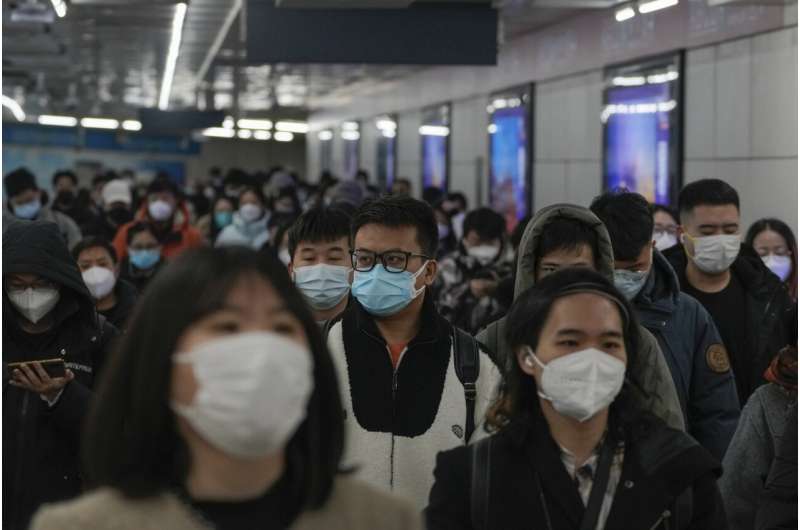 China had long hailed its restrictive “zero-COVID” approach of lockdowns, quarantines and compulsory testing as keeping case numbers and deaths relatively low. Yet the policy placed China’s society and the national economy under enormous stress and prompted rare anti-government protests, apparently convincing the ruling Communist Party to heed outside advice and alter its strategy.

Now, unofficial reports suggest a widespread wave of new coronavirus cases, and relatives of victims and people who work in the funeral business have said deaths tied to COVID-19 are increasing.

Wang Guangfa, a doctor in the Respiratory Department of Peking University First Hospital, warned Beijing will see the peak of severe cases in the next one or two weeks.

“The current wave of infection resembles an epidemic tsunami,” he said in a Q&A piece published online this week. He also said northern China will have a higher rate of severe cases than the southern part because of the cold weather.

As is typical, cases of severe illness and death will be largely concentrated among the elderly or those who haven’t received booster shots of vaccines, said Dr. Gagandeep Kang, who studies viruses at the Christian Medical College in Vellore, India. 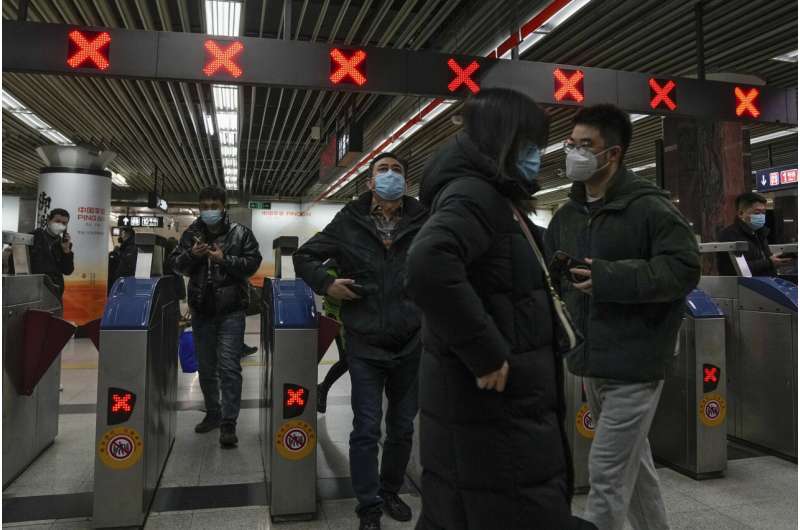 China, despite fully vaccinating 90.3% of its population, has only given a booster dose to 60.5%. China needs to prioritize giving boosters, especially to those over 60, to avoid large numbers of deaths, Kang said.

The National Health Commission said the five newly recorded fatalities had taken the country’s total death toll to 5,242—relatively low by global standards but potentially set to increase substantially following moves by the government to step away from the “zero-COVID” policy.

With people now testing and recuperating at home, China has said it is no longer possible to keep an accurate count of new case numbers, making it substantially more difficult to gauge the state of the current wave of infection and its direction. Some scientific models have estimated numbers will rise with an eventual death toll in the tens or hundreds of thousands.

China is trying to persuade reluctant seniors and others at risk to get vaccinated, apparently with only moderate success. Vaccination centers visited over recent days have been largely empty and there has been no major publicity drive in the entirely state-controlled media.

The other major concern is shoring up health resources in smaller cities and the vast rural hinterland ahead of January’s Lunar New Year travel rush, which will see migrant workers returning to their hometowns. 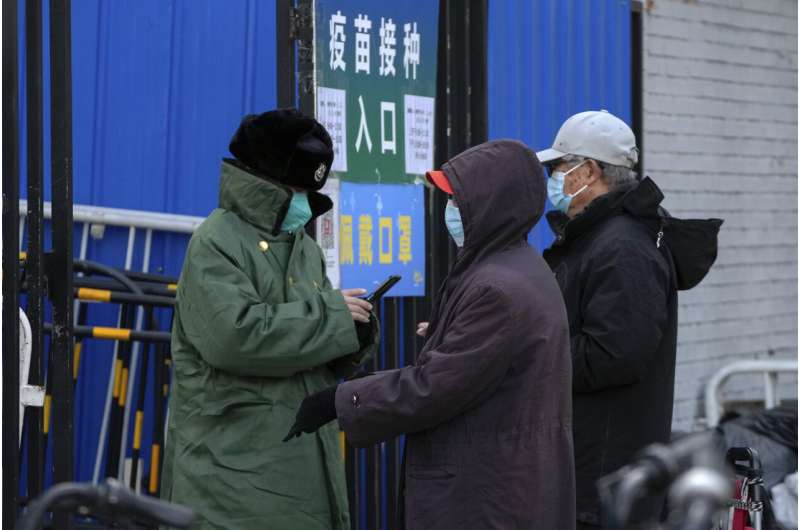 Numbers of fever clinics have been expanded in both urban and rural areas and people have been asked to stay home unless seriously ill to preserve resources. Hospitals are also running short on staff, and reports say workers have been asked to return to their posts as long as they aren’t feverish.

Case and death counts in every country are thought to underestimate the true toll of the virus, but there are particular concerns in China. Chinese health authorities count only those who died directly from COVID-19, excluding deaths blamed on underlying conditions such as diabetes and heart disease that raise risks of serious illness.

In many other countries, guidelines stipulate that any death where the coronavirus is a factor or contributor is counted as a COVID-19 related.

© 2022 The Associated Press. All rights reserved. This material may not be published, broadcast, rewritten or redistributed without permission.