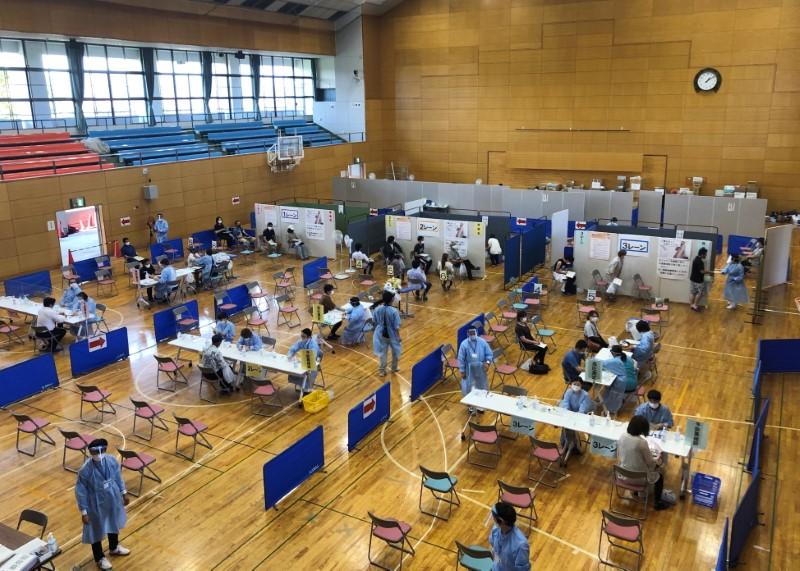 (Reuters) – Here’s what you need to know about the coronavirus right now:

A gymnasium which turned into a mass vaccination centre for the elderly is pictured in Soma, Fukushima Prefecture, Japan, June 9, 2021. Picture taken June 9, 2021. REUTERS/Rocky Swift

British Prime Minister Boris Johnson expects the Group of Seven to agree to donate 1 billion COVID-19 vaccine doses to poorer countries during its summit starting on Friday, and help inoculate the world by the end of next year.

Just hours after U.S. President Joe Biden promised to supercharge the battle against the coronavirus with a donation of 500 million Pfizer shots, Johnson said Britain would give at least 100 million surplus vaccines to the poorest nations.

British foreign minister Dominic Raab said on Friday there was no doubt some countries were using vaccines as a diplomatic tool to secure influence, and that Britain did not support so-called “vaccine diplomacy”.

Over 600 million people in China given COVID-19 shots

More than 600 million people in China have been vaccinated against COVID-19, a health official said on Friday, as the country forges ahead to meet a goal of inoculating 40% of its 1.4 billion population by the end of June.

As of Thursday, 845 million doses have been administered, covering 622 million people, Cui Gang, an official at the National Health Commission, said at a media briefing.

The government also said on Friday it welcomed Taiwanese to come and get vaccinated and called on Taiwan to remove obstacles and allow its people to receive the “highly effective” Chinese shots.

Brazil plans to allow vaccinated people to not wear masks

Brazil President Jair Bolsonaro said on Thursday that the health minister was preparing a measure for people who have been vaccinated or previously infected to no longer have to wear face masks.

Bolsonaro, who has opposed lockdowns and social distancing despite his country having the second highest coronavirus death toll in the world, said in a speech that quarantines should be only for infected people.

Australia’s Victoria state reported zero locally acquired cases of COVID-19 for the first time in nearly three weeks on Friday as state capital Melbourne came out of a snap two-week lockdown following an outbreak that has seen about 90 cases since May 24.

Melbourne exited the lockdown on Thursday night but some restrictions on travel and gathering will remain, including a rule requiring the city’s five million residents to stay within 25 km (15 miles) of their homes.

Neighbouring New South Wales state and Queensland, meanwhile, are on virus alert after an infected woman and her husband travelled from Victoria through several country towns in both states.

A higher-than-expected number of young men have experienced heart inflammation after their second dose of the mRNA COVID-19 shots from Pfizer/BioNTech and Moderna, according to data from two vaccine safety monitoring systems, the U.S. Centers for Disease Control and Prevention (CDC) said on Thursday.

The agency said it is still assessing the risk from the condition and has not yet concluded that there was a causal relationship between the vaccines and cases of myocarditis or pericarditis.