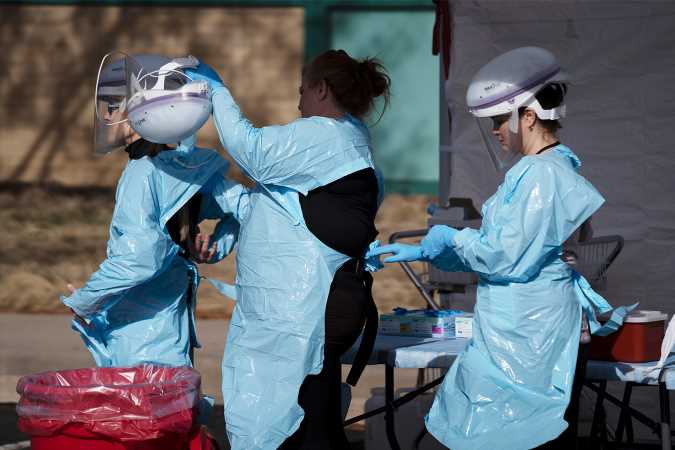 For some counties and cities that share a public health agency with other local governments, differences over mask mandates, business restrictions, and other covid preventive measures have strained those partnerships. At least two have been pushed past the breaking point

A county in Colorado and a small city in Southern California are splitting from their longtime public health agencies to set up their own local departments. Both Douglas County, Colorado, and West Covina, California, plan to contract some of their health services to private entities.

In Douglas County, Colorado, which is just south of Denver and has one of the nation’s highest median household incomes, many residents had opposed mask mandate guidance from the Tri-County Health Department, a partnership among Adams, Arapahoe, and Douglas counties. Tri-County issued a mask order for the counties’ school districts in September 2021 and, within days, conservative Douglas County announced its commissioners had voted unanimously to form its own health department.

Douglas County, which in 1966 joined what was then called the Tri-County District Health Department, is phasing out of the partnership, with plans to exit entirely by the end of this year. It has already taken over many of its own covid relief efforts from Tri-County.

It is contracting things like covid case investigation, contact tracing, and isolation and quarantine guidance to a private consultant, Jogan Health Solutions, founded in early 2021. The contract is reportedly worth $1.5 million.

“We believe the greatest challenges are behind us … those associated with being one of three counties with differing and competing public health demands, on a limited budget,” Douglas County spokesperson Wendy Manitta Holmes said in a statement.

Daniel Dietrich, Jogan Health’s president, declined a request for an interview. “All of the data that Jogan Health is collecting is being relayed directly to Douglas County so that public policy aligns with real-time data to keep the residents of Douglas County safe,” Jogan Health spokesperson Sam Shaheen said in a prepared statement.

A similar situation is playing out east of Los Angeles, in West Covina, California. Its City Council has voted to terminate its relationship with the Los Angeles County Department of Public Health over disagreements about covid shutdowns.

West Covina officials have criticized the county health department’s covid restrictions as a one-size-fits-all approach that may work for the second-largest city in the U.S., but not their suburb of about 109,500 people. West Covina plans to join Long Beach, Pasadena, and Berkeley as one of a small number of California cities with its own health agency. A date for the separation has not been set.

As in Douglas County, West Covina plans to contract some services to a private consultant, Transtech Engineers, that works mainly on city engineering projects and federal contracts, according to its website. Transtech officials did not respond to requests for comment.

West Covina Councilman Tony Wu and area family physician Dr. Basil Vassantachart are leading efforts to form the city’s own department. They hope L.A. County’s oversight of about 10 million people — “bigger than some states,” as Vassantachart noted — can be broken up into regional departments.

Amitabh Chandra, who directs health policy research at the Harvard Kennedy School of Government, said the private sector won’t necessarily have better answers to a public health problem. “It might be the case that they’re good at delivering on some parts of what needs to be done, but other parts still have to be done in-house,” Chandra said.

Jeffrey Levi, a professor of health policy and management at the George Washington University, suggests there are too many local health departments in the U.S. and there should be more regionalization, rather than splitting into smaller departments.

“It’s very hard to effectively spend money and build the foundational capabilities that are associated with a meaningful public health department,” Levi said. “Doing this just because of anger at something like a mask ordinance is really unfortunate.”

Levi noted that public health departments are responsible for everything from restaurant and septic system inspections to administering the Special Supplemental Nutrition Program for Women, Infants, and Children, or WIC, a federal food assistance program. If a department is not adequately resourced or prepared, residents could see lapses in food or water safety efforts in their community, Levi said.

“L.A. County Public Health Department is one of the most sophisticated, and one of the most robust health departments in the country,” Levi said. “You are losing access to just a wide, wide range of both expertise and services that will never be replicable at the local level. Never.”

“The public will be hurt in ways that are not instantly measurable,” he added.

The most recent major private-sector takeover of public health was a flop. A private nonprofit, the Institute for Population Health, took over Detroit’s public health functions in 2012 as the city was approaching bankruptcy.

The experiment failed, leaving a private entity unable to properly oversee public funding and public health concerns placed on the back burner amid the city’s economic woes. Residents also didn’t have a say in where the money went, and the staff on the city’s side was stripped down and couldn’t properly monitor the nonprofit’s use of the funds. By 2015, most services transferred back to the city as Detroit emerged from bankruptcy in 2014.

“That private institute thought it was going to issue governmental orders until it was informed it had no power,” said Denise Chrysler, who directs the Network for Public Health Law’s Mid-States Region at the University of Michigan School of Public Health.

“We have programs and services that many single-county health departments are not able to do just because of the resources that we can tap into,” Ludwig said. “Building that from scratch is a huge feat and will take many, many, many years.”

There are also practical benefits. A larger health department, according to Ludwig, is more competitive in securing grant funding, can attract and retain high-quality expertise like a data team, and can buy supplies in bulk.

But West Covina’s Wu accepts that the city will not be able to build its department overnight. “You have to start small,” he said.

Douglas County and West Covina face another key snag: hiring amid a national public health worker shortage. Douglas County officials say they are conducting a national search for an executive director who will determine the new health department’s staffing needs.