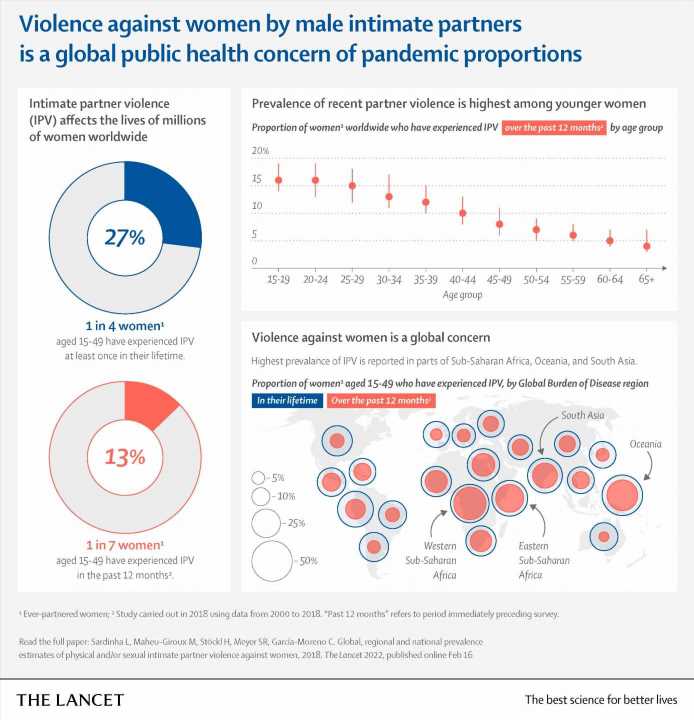 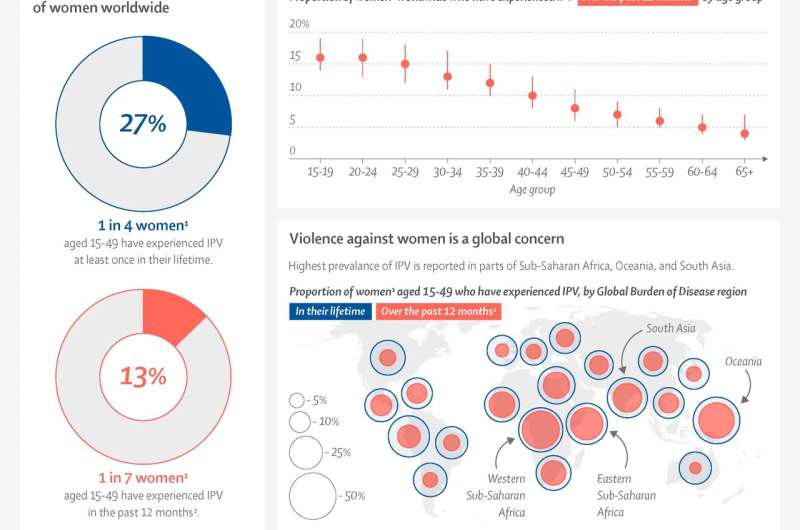 New research published in The Lancet estimates that over one in four women have experienced domestic violence within their lifetime. Using data from the World Health Organisation Global Database on the Prevalence of Violence Against Women, which covers 90% of women worldwide, these new estimates indicate that prior to the COVID-19 pandemic 27% of ever-partnered women aged 15-49 had experienced physical and/or sexual violence from an intimate partner in their lifetime, with one in seven (13%) experiencing recent violence from an intimate partner (within the past 12 months of the survey).

Intimate partner violence of ever-partnered women (defined as women who are or have been married, co-habit, or have a long-term sexual partner) refers to physically, sexually, and psychologically harmful behaviours in the context of marriage, cohabitation, or any other form of union. It can have major short and long-term impacts on the physical and mental health of the victim, leading to substantial social and economic costs for governments, communities, and individuals.

The UN 2030 Agenda for Sustainable Development has called for an end to violence against women in its Sustainable Development Goals (SDG5.2) . This study aims to provide baseline estimates for intimate partner violence against women on global, regional, and country-wide levels to help governments monitor their progress towards this target and inform policy and programming to prevent and respond to violence.

This new study uses population-based surveys, improved quality of data, and updated methods to provide current prevalence estimates of intimate partner violence across the world, up to and including the year 2018, reporting that one in four ever-partnered women experience violence from intimate partners alone. The study only estimated physical and sexual violence and work is underway by WHO to strengthen measures of reporting psychological harmful behaviours by partners.

This present analysis reveals that governments are not in line to meet targets for eradicating violence against women. “Whilst progress has been made in the past 20 years, it is still grossly insufficient to meet the SDG target for eliminating violence against women by 2030,” says study senior author Claudia García-Moreno, World Health Organisation.

She adds: “Intimate partner violence affects the lives of millions of women, children, families and societies worldwide. Although this study took place before the COVID-19 pandemic, the numbers are alarming and research has shown the pandemic exacerbated issues leading to intimate partner violence such as isolation, depression and anxiety, and alcohol use, as well as reducing access to support services. Preventing intimate partner violence from happening in the first place is vital and urgent. Governments, societies and communities need to take heed, invest more, and act with urgency to reduce violence against women, including by addressing it in post-COVID reconstruction efforts.”

The data used in this research were from the WHO Global Database on Prevalence of Violence Against Women and include over 300 eligible surveys and studies conducted between 2000-2018. It covers 161 countries and areas, accounting for 2 million women aged 15 years and older, representing 90% of the global population of women and girls. Statistical analysis allowed estimation of the prevalence of intimate partner violence over different age groups, regions, and time ranges to be calculated.

Globally, 27% or approximately one in four ever-partnered women aged 15-49 years are estimated to have experienced intimate partner violence at least once in their lifetime since age 15. The estimates suggest that in 2018, up to 492 million women aged 15-49 years experienced intimate partner violence in the past 12 months, equating to 13% or one in seven women. Because estimates in this study are based off women’s self-reported experiences and given the sensitive and stigmatised nature of the issue, the true prevalence of violence that these women are subjected to by an intimate partner is likely to be even higher.

“The high number of young women experiencing intimate partner violence is alarming, as adolescence and early adulthood are important life stages when the foundations for healthy relationships are built. The violence these young women experience has long-lasting impacts on their health and well-being. Intimate partner violence is preventable and more needs to be done to develop and invest in effective community and school-based interventions that promote gender equality and reduce young women’s risk of being subjected to violence from a partner,” says Lynnmarie Sardinha, World Health Organisation, the lead author of this paper.

Regional variations by Global Burden of Disease classifications revealed that the lifetime prevalence of intimate partner violence among women aged 15-49 was highest in Oceania (49%), and Central Sub-Saharan Africa (44%). The regions with the lowest lifetime intimate partner violence prevalence estimates were Central Asia (18%), and Central Europe (16%).

“These findings confirm that violence against women by male intimate partners remains a global public health challenge. Governments are not on target to meet goals to eradicate violence against women by 2030. The authors call for urgent investment in effective multisector interventions and a strengthened public health response in tackling this issue post-COVID-19,” says Claudia García-Moreno.

The authors acknowledge some limitations with the study. These include the reliance on the availability and quality of existing violence against women survey data; some important gaps remain in the data for some geographical regions and sub-populations, for example, those living with disabilities, indigenous/ethnic minority, or migrant women, trans women and women in same-sex partnerships for which data is currently limited. The definition of partnership is also variable across contexts and relies on the definition given in the surveys used. This means that some studies may not have captured all partnership types, especially in younger age groups, although the methodology used, as far as possible, adjusted for this to minimize under-estimation.