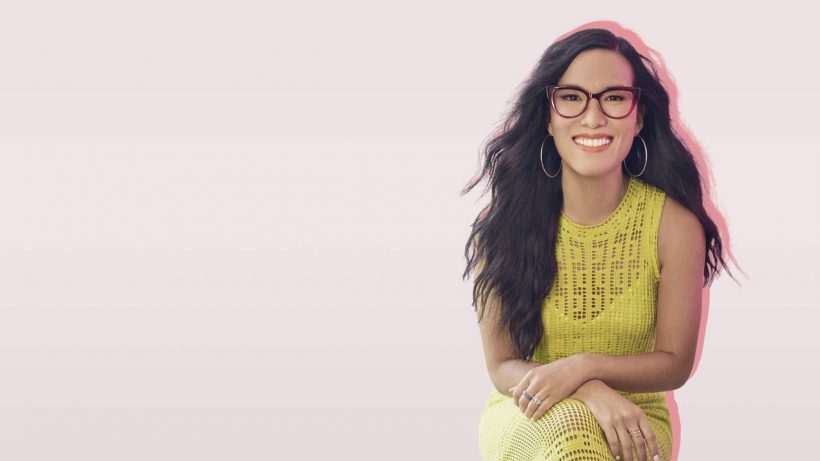 "I don't want to lean in, OK? I want to lie down. I want to lie the f— down.” This is something Ali Wong laments during her first Netflix special, 2016’s Baby Cobra. That joke might be even more hilarious today because Ali hasn’t stopped working since then. Not only has she given birth to two babies but she also stars on ABC’s American Housewife, has released a second special (2018’s Hard Knock Wife), cowrote and starred on Netflix’s Always Be My Maybe (which reportedly brought in a whopping 32 million household views), has been touring with her comedy, and wrote a book called Dear Girls, which is out October 15.

And now that she’s reached this crazy level of success, the 37-year-old could start taking it easy—maybe do less stand-up. But that’s never going to happen. “Back in the day, saying you wanted to be a stand-up comedian was like saying you wanted to be president,” Ali explains. So now that she’s made it, why the heck would she give it all up?! When she’s not filming a movie, Ali spends most nights at comedy clubs, testing out new material so she doesn’t “let that muscle atrophy.”

Her drive combined with her frankness have made Ali a modern icon for women. In fact, the Smithsonian even has plans to showcase the $8 dress she wore during her first special. Rather than pretend it’s a breeze, the comedian is happy to broadcast that she gets a lot of help. Here, Ali talks candidly about her career, marriage, and how she feels about her body after two babies.

What sparked your interest in comedy?

I was in a theater group in college, and I loved it. Then I got a scholarship to study in Vietnam. It was great, but I found that [culturally] they didn’t have a sense of sarcasm, and I missed that. When I returned, I was determined to have a career in comedy. Stand-up seemed like the quickest way to do that because you can just get up onstage. Like, without even a microphone, you can get up with nothing and perform. I started doing open mics when I was 22.

Did you grow up in a funny household?

Yes. What I’d say was unusual in my family is that we were all very communicative—which is very un-Asian-American. We were raised to talk about how we felt—it was OK to express anger and desire.

Is there anything off-limits when it comes to what you’ll talk about onstage?

I’ll let my husband veto stuff. It’s not so much about subject choice; it’s about word choice. So no topic is off-limits—it just depends on if I can make it funny. I would love to talk about politics, but I’ve never been able to craft my thoughts into jokes rather than just share anger.

You did both comedy specials while pregnant. Were you surprised by how much buzz there was around that?

I was shocked nobody was trying to talk to me about my gender or my race, which I loved. Everyone wanted to talk about me being pregnant and how I spoke about my miscarriage.

Were you scared to talk about the miscarriage?

No. I remember hoping my husband’s parents wouldn’t be disappointed. It was this intrinsic concern. I didn’t want them to feel like their son married a bad seed—and they didn’t feel that way; they were very supportive. And there was nothing that would indicate that they would ever think that way, but that’s where my mind immediately went.

Had you told people you were pregnant?

Yes. I didn’t realize miscarrying was a thing that could happen. That’s why I told everybody. I told the lady who cleans my house, and when she found out I was seven weeks along, she told me I shouldn’t be telling people. Now I know why. It’s because then you have to tell everyone the bad news. Some people have insensitive reactions. Like, they will ask if it’s because you had sushi or you were performing too much. They want to point to some cause and don’t realize how bad that makes you feel.

You’ve been candid about being a working mom and needing help. Why?

Because it’s so unfair. Especially when some of these moms look so hot. J.Lo had twins; she’s 50 now, what the f—?! It’s like, “B—-, spill the beans! Tell us the secret or let us know it’s not possible without resources.” My girlfriends keep me grounded. They are real people who are working 60-hour weeks—they are public defenders, doctors, graphic designers. You get the picture. They work their asses off. So I want to be honest about how I am able to do everything I do.

You’ve been with your husband for nearly 10 years. He has really been with you on this fame journey. What’s that like?

He has his own thing going on too. But it’s definitely weird. I’m very open about the fact that we go to therapy. We talk a lot about the transitions that we go through as a couple. He is so happy for me, but this lifestyle is not what he expected.

Well, we’ve figured certain things out. He’s not an event person. So we decided that he’s not going to come to any more events—it’s just not how he wants to spend his time. I get it. I think in some ways it’s easier for women because it’s fun to get a dress. When you have a successful man, [going to events] can be his wife’s whole life, and she will jujitsu that s— into being a lifestyle blogger. All the power to those women!

Why did you decide to write your memoir, Dear Girls, as letters to your daughters?

When my dad passed away, his friend gave me a letter that my dad had written to me. It was relatively short, and I realized there was so much more I wanted to learn about who he was. He once told me a story about getting into a fight when he was a kid, and I loved that story so much because I could never imagine my dad getting into a fight. So my book is a lot about who I was before I had them.

What’s the lesson that took you the longest to learn?

Figuring out my relationship to my body and accepting that it’s going to be what it’s going to be. I’ve had two C-sections—I’d show you, but I don’t want to get Me Too’d. But if I am naked, you can see my belly is a little lopsided over my scar. I have a keloid thing that runs in my family. Some women will have scars that look like little strings of floss. Mine looks like a finger. It bummed me out for a while, until one day, I was like, “It is what it is. I got two beautiful girls out of it.” I’d like to say it’s a celebration of my body, but if I am being truthful, it’s not—it’s just that it doesn’t bum me out anymore.

Are you a healthy eater?

I am. When I met my husband, he was a vegan. Because I liked him so much and wanted to trap him, I learned to cook vegan. It forced me to become really inventive with my cooking. Now, in our house, we eat a ton of vegetables—we’re big fans of leafy greens.

What about working out?

Well, I do not like kettlebells. It’s like a medieval workout. But I do yoga. I love watching Beyoncé’s Homecoming on the elliptical. And, if I’m really crunched for time, I’ll play [the video game] Just Dance—I don’t like the routines; I like the nonstop sections.

If I do another movie, it will have to be an awesome script with awesome people for me to be willing to be away from my kids and take a break from stand-up. And I definitely have a couple more comedy specials I want to do.