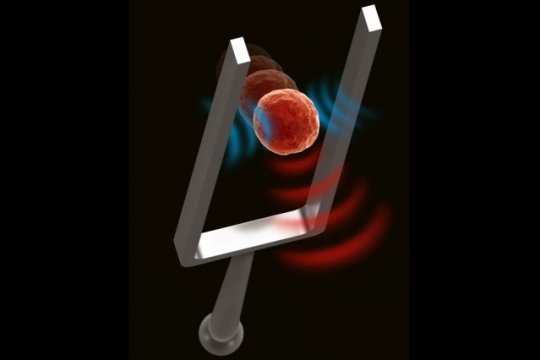 MIT engineers have devised a new, noninvasive way to measure the stiffness of living cells using acoustic waves. Their technique allows them to monitor single cells over several generations and investigate how stiffness changes as cells go through the cell division cycle.

This approach could also be used to study other biological phenomena such as programmed cell death or metastasis, the researchers say.

“Noninvasive monitoring of single-cell mechanical properties could be useful for studying many different types of cellular processes,” says Scott Manalis, the Andrew and Erna Viterbi Professor in the MIT departments of Biological Engineering and Mechanical Engineering, a member of MIT’s Koch Institute for Integrative Cancer Research, and the senior author of the study.

It could also be useful for analyzing how patients’ tumor cells respond to certain drugs, potentially helping doctors choose the best drugs for individual patients, the researchers say.

The new measurement technique makes use of a technology that Manalis’ lab previously developed to measure the mass of cells. This device, known as the suspended microchannel resonator (SMR), can measure the mass of cells as they flow through a tiny fluid-filled cantilever that vibrates inside a vacuum cavity. As cells flow through the channel, their mass slightly alters the cantilever’s vibration frequency, and the mass of the cell can be calculated from that change in frequency.

In the new study, the researchers discovered that they could also measure changes in stiffness to the cell — specifically, a cell structure called the cortex that lies just below the cell membrane. The cortex, which helps to determine the shape of a cell, is composed mainly of actin filaments. Contraction and relaxation of these filaments often occurs during processes such as cell division, metastasis, and programmed cell death, leading to changes in the stiffness of the cortex.

The researchers confirmed that their technique is accurate by measuring hydrogel particles of known stiffnesses, created in Doyle’s lab, and measuring them as they flowed through the device.

The acoustic waves used to generate these measurements disturb the cell by only about 15 nanometers, much less than the displacement produced by most existing techniques for measuring mechanical properties.

The MIT team showed that they could use this technique to measure stiffness of a single cell repeatedly for over 20 hours as they flowed back and forth through the SMR device. During this time, they were able to monitor stiffness through two or more cell division cycles. They found that as cells enter mitosis, stiffness decreases, which the researchers believe is due to the swelling that occurs when the cells prepare to divide. By imaging the cells, they confirmed that the cell cortex becomes thinner as the cell swells.

The researchers also found that cell stiffness dynamically changes just before it divides. Actin accumulates at the equatorial region, making the cell stiffer, while the polar regions become more relaxed as actins are temporarily depleted.

“We can use our way of measuring stiffness to look at the dynamics of actin in a label-free, noninvasive way,” Kang says.

The researchers plan to start using this technique to measure the stiffness of even smaller particles, such as viruses, and to explore whether that measurement might be correlated with a virus’s infectivity.

“Measuring stiffness of submicron particles with meaningful throughput is currently not possible with existing approaches,” Manalis says. Such a capability could help researchers who are working on developing weakened viruses that could be tested as possible vaccines. This kind of measurement could also be used to help characterize tiny particles such as those used for drug delivery.

Another possible application is combining the stiffness measurement with the mass and growth rate measurements that Manalis’ lab has been developing as a possible predictor of how individual cancer patients will respond to particular drugs.

“When it comes to assays for precision medicine, measuring multiple functional properties from the same cell could help to make tests more predictive,” Manalis says.

The research was funded by the Koch Institute Support Grant from the National Cancer Institute (NCI), the Ludwig Center for Molecular Oncology, the NCI Cancer Systems Biology Consortium, and the Institute for Collaborative Biotechnologies through the U.S. Army Research Office.