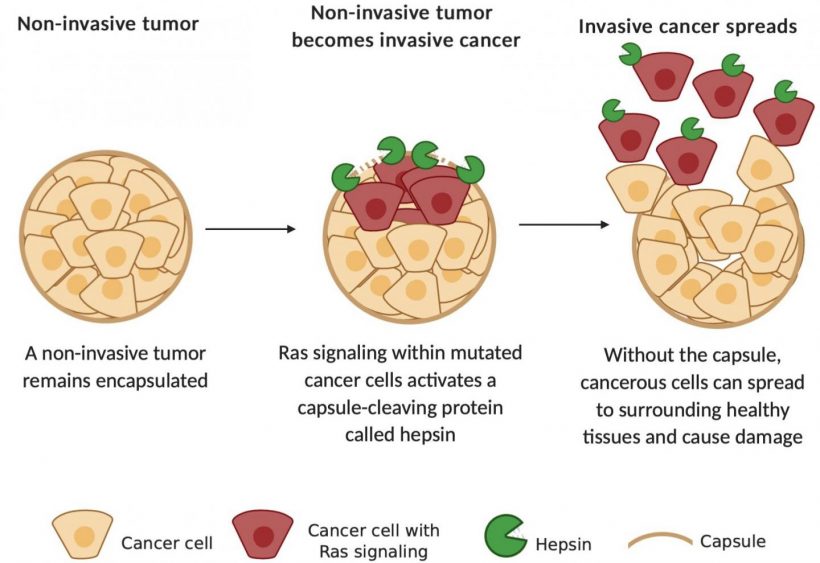 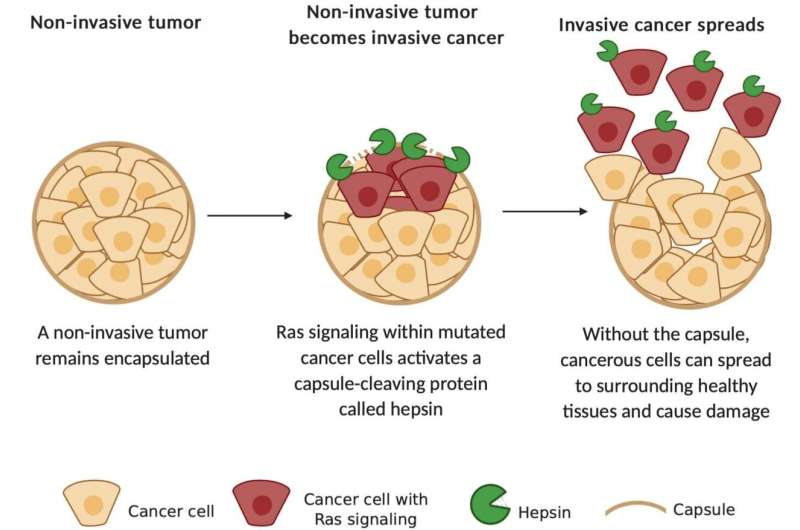 Researchers at the University of Helsinki have defined a cancer invasion machinery which is orchestrated by a frequently mutated cancer gene called Ras. When signaling from Ras protein becomes abnormally high, like it does in many cancers, this switches on the cellular machinery that helps the cancer cells to depart from the tissue from which the cells have developed.

It has been unclear how the cancer invasion machinery works exactly, until now, as the study finds Ras in the role of Friar Lawrence in Shakespeare’s famous play, “Get me an iron crow and bring it straight unto my cell (Romeo and Juliet, 5.2.21-23).” In other words, a ‘molecular crowbar’ seems to execute the job. The new study has been published today at Cancer Research, a journal of the American Association for Cancer Research.

Cancer researcher and the last author of the study, Professor Juha Klefström, explains the findings: “As long as tumors remain in the original body tissue from which they developed from, they are benign and harmless. The tumor cells only become life-threatening cancer cells, when they acquire the capability to spread into surrounding healthy tissues through a process called invasion. We found that a master cancer protein called Ras activates such invasion machinery in the cells. Central to the function of this machinery is a serine protease called hepsin.”

Hepsin is a protease, a type of protein that cleaves other proteins into pieces. Typically, in the breast and other epithelial tissues, serine proteases like hepsin ensure that the epithelial cells are properly glued to the neighboring cells and to a surrounding capsule called the basement membrane. Accordingly, hepsin is found in limited, specific contact sites on the surface of the cell where it binds to other cells and the basement membrane. However, the new study shows, that if Ras becomes converted to its cancer-causing form by an unfortunate mutation, persistent signals from cancer-causing Ras eventually produce too much hepsin, which can then be found all over the cell as opposed to small areas.

Nearly one-fifth of all cancers harbor cancer-causing mutant Ras. The mutant form is especially common in pancreatic and colorectal cancer.

“Ras is not that commonly mutated in breast cancer, which our laboratory studies, but our research shows that mutant Ras hijacks hepsin through a signaling mechanism that is common also in breast cancer. Therefore, our findings are relevant for understanding the mechanisms of how breast cancer spreads”, says the first author of the study Dr. Topi Tervonen.

Mutant Ras has been a holy grail for drug developers due to its common presence in human cancer. However, the task of developing specific Ras-blocking drugs has turned out to be extremely difficult. If Ras is a difficult drug target, would it be possible to prevent the cancer-causing effects of Ras by blocking the cancerous signals that Ras is sending in the cells?

“Interestingly, we managed to almost completely prevent the damage to basement membrane caused by the Ras cancer protein in a three-dimensional cell culture, when we prevented hepsin from functioning by using specific antibodies. In animal experiments, blocking hepsin also significantly reduced the spread of Ras-expressing tumors to surrounding tissues,” Klefström and Tervonen state.