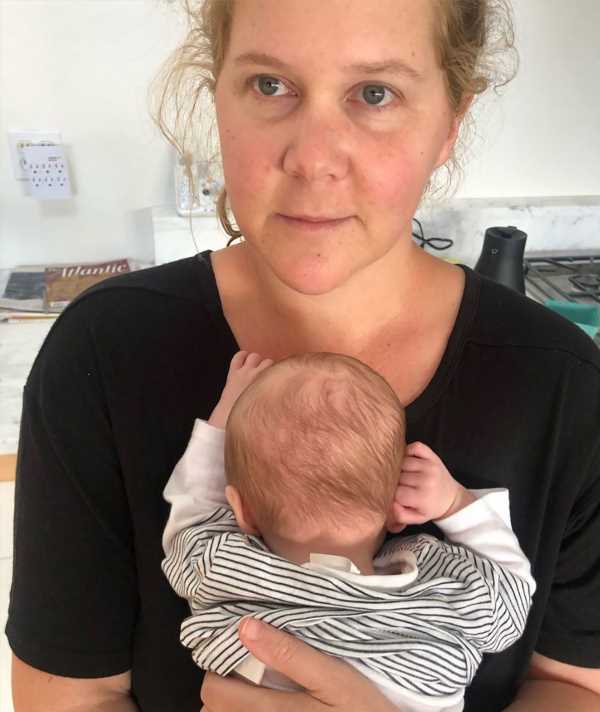 Amy Schumer is so in love with baby Gene!

On Sunday morning, the comedian, 38, shared an adorable new photo of her 7-week-old son, showing him dressed in a tiny striped shirt and cuddling against her chest. Schumer and husband Chris Fischer welcomed Gene, their first child, in early May.

Schumer — who has been open about sharing the highs and lows of being a new mom — left the sweet post captionless, adding only four red heart emojis and one crying emoji.

Earlier this month, the actress shared two photos of herself spending time with Gene while wearing her stretchy white “hospital underwear.” Poking fun at her glamorous choice of post-pregnancy attire, she captioned the snaps, “5 weeks. Hospital underwear for life!”

Days later, the mother of one — who has been on the receiving end of many mom-shaming comments since welcoming her son — joked that she was “sorry” for the photos in a pair of snapshots in which she showed off her cesarean-section scar.

“I’m really sorry if I offended anyone with my hospital underwear. Except I’m just kidding. #csection #balmain,” she captioned the post.

The new mom has also joked about not being able to watch her favorite television shows since welcoming Gene — specifically, the Elisabeth Moss-starring Handmaid’s Tale.

“Oh ok so I can’t watch handmaids anymore. #filledwithregret,” Schumer captioned an Instagram post that showed her son wearing a lion-print outfit and snuggling up to her chest, seemingly sound asleep.

In late May, after Schumer returned to the stage for the first time two weeks after giving birth, she faced backlash from fans who believed it was “too soon” for her to be heading back to work.

Taking the high road, the Growing comedian went on to address her critics by “sending out love.”

“Sending out love to the moms shaming me for doing standup last night!” she wrote alongside a post that featured the star sitting in bed in her underwear, wearing a pumping bra.