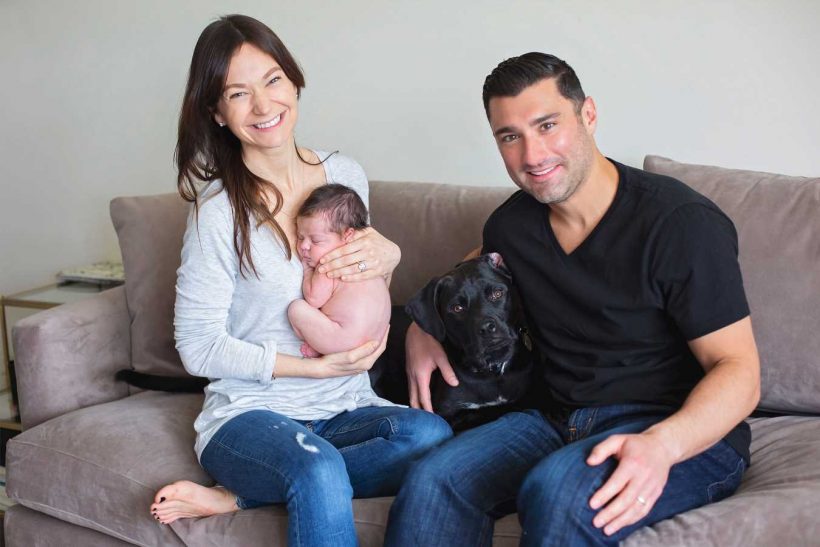 Freelance journalist and lifestyle blogger Jeannine Morris Lombardi had wanted to pursue adoption for as long as she can remember. So when she married Joe Lombardi in 2014, the couple hoped it would be part of their love story. Five years later, the Lombardis got their wish: They welcomed daughter Amaya Jo via adoption this past April.

While Jeannine says their new baby is “the most perfect piece of our family,” bringing Amaya home to New Jersey was long, complicated and emotionally draining. In an exclusive interview with PEOPLE, she opens up about how several Instagram users posing as potential birth mothers manipulated her during the adoption process.

Instead of applying with an adoption agency — a process that can take anywhere from two to seven years, according to adopt.org — the New Jersey couple chose to invest time and money into pursuing a private adoption. After the devastating loss of their first and only biological daughter (who was stillborn at 32 weeks gestation), the couple were desperate for a baby.

So with the help of a lawyer, the Lombardis were largely responsible for finding a birth mother on their own. They launched an informative website, and got a new email address and phone number to communicate with pregnant women exploring adoption. Jeannine, a popular social-media influencer with nearly 30,000 followers, even went the extra mile by using Instagram as a marketing tool.

“The thing is, when you do a private adoption, you’re the ones dealing with the bulls—,” Jeannine says. “We went through six months of speaking to 16 different women — or so we thought — trying to figure out who was serious about it.”

The worst of these interactions started over Instagram direct messages, when a user claiming to be Ashley (@ashleymamabear2019) reached out.

“She contacted us saying she was 16 years old,” Jeannine tells PEOPLE. “She sent us pictures throughout her pregnancy of her and her bump. We knew about the weight she gained, we knew that she craved ice cream.”

She adds, “[Ashley] was always crazy. But we thought we were dealing with a troubled, bipolar young girl who was in a really difficult situation, and we had compassion for her.”

For four months, Ashley and her boyfriend Chris took the Lombardis on an emotional roller-coaster ride. Although her Instagram account has since been disabled, Jeannine came across the familiar username in a BBC article published last month, which explained how Ashley had also deceived an adoptive mom named Samantha Stewart.

Carrie Ann Inaba Reveals She’s Considering Adoption: “I Would Love to Be a Mom”

After reading the BBC story, Jeannine opened up about her relationship with Ashley in a blog post called “The Adoption Scam on the News Happened to Us.”

“Ashley never asked for money or anything at all. All she wanted was our time and emotional investment,” she wrote. “We watched her bump grow and would get updates on how she was feeling and the baby was doing. Sonogram pictures filled our texts and late night calls with her would last up to three hours. It was like she held us captive.”

As an adoptive parent, Jeannine explains to PEOPLE that it was her job to “form relationships with these women and really be there for them.” But Ashley took advantage of Jeannine and Joe, and led them on for months.

Jeannine had been in contact with other fake potential birth mothers on Instagram before Ashley entered the picture, but she says Ashley was the only person who she and her husband became emotionally invested in — and the red flags surrounding Ashley’s situation weren’t nearly as obvious as the others.

“There’s one person who got to our hearts and made us cry all the time and it was Ashley,” the journalist tells PEOPLE. “She told us her boyfriend was in jail and that he abused her. She told me that her mother committed suicide in front of her and that her father was never around. I felt bad and I just wanted to be there for her.”

Meet the HGTV Star (and Father of Six!) Who Adopted Four Children with Special Needs

Ashley also managed to avoid private-adoption protocol, like a background check, which the lawyer handles to ensure adoptive parents aren’t being taken advantage of.

“She was 16 so she couldn’t call our lawyer,” Jeannine explains. “And she lived with her father who worked at Walmart, which was why [she said] he could never get on the phone with our lawyer. She just kept making up stories. She would lead us on.”

After months of harassment at the hands of Ashley and Chris, the New Jersey couple gave up on the process. They turned off their adoption phone and disabled their adoption email, website and Instagram account in April, even after connecting with an Arizona-based birth mother in February.

Gay Dads Adopt 6 Siblings, Ages 7 to 14, After They Spent Half a Decade in Foster Care

The couple finally decided to pursue adoption through an agency — until the Arizona birth mother reached out to their lawyer while they were away at a wedding in Miami. The Lombardis were overjoyed to learn that the birth mother had welcomed a healthy baby girl and wanted them to adopt her right away.

“We ended up flying from Miami to Arizona to go get our daughter that weekend,” Jeannine says. “It was insane that as soon as I let everything go and said, ‘I’m not doing this anymore,’ Amaya was born.”

While the journey was worth it in the end, Jeannine admits, “If we were to adopt again, we would definitely go through an agency.”

“[Private adoption] is a 24/7 job,” the blogger adds. “It’s emotionally and mentally exhausting. If we went with an agency, we would’ve never met Ashley. The agency would’ve done all of this and said, ‘She’s not real.’ All that in-between bulls— that my husband and I had to deal with is cut out. If we were in that game a little bit longer, I definitely think we would’ve been scammed again.”