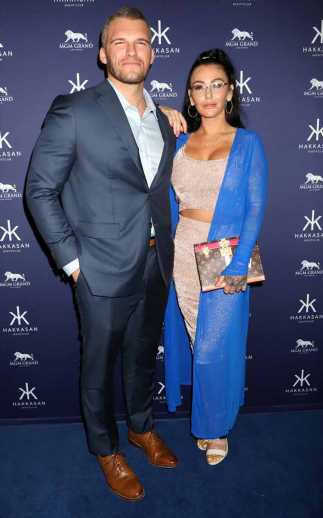 Jenni “JWoww” Farley‘s kids are already big fans of the new man in her life.

“He’s always like, ‘Hi, Baby!’ ” said Farley, 34, adding that her 4½-year-old daughter Meilani Alexandra has “always known him as [my friend] Erica’s brother, so that’s how I wanted to keep it with the kids, so it’s not an awkward transition. So they’ve just always known him as one of our really close friends.”

“I’ve spent a lot of time with the kids,” said Carpinello, a 24-year-old professional wrestler. “I’ve known Meilani for a few years. She’s known me for a couple years, she is great with me. I love the kids. They’re great.”

PEOPLE confirmed the couple was dating in April, but it hasn’t taken long for Farley’s daughter to take a big liking to him — maybe even more than her mom expected her to!

“[Meilani] honestly probably likes him more than me at this point, because he’s cooler and will do a lot more,” she joked to ET. “And I’m like, the mom yelling in the background. But it’s fine. I’ll let him have his moments.”

Farley and Carpinello had been friends for years before beginning to date after they met through the wrestler’s sister Erica, E! News previously reported.

Though things were never romantic with them while Farley was married to now-estranged husband Roger Mathews, Carpinello was at the former pair’s wedding with his sister.

ET reports that the pair have already said “I love you,” with Farley noting that she loved Carpinello “way before, like, falling in love with him, because I always wanted to see him succeed.”

“I just adore his company,” the reality star added. “Even if he doesn’t like something, he goes above and beyond and wants to experience it with me — watching like, Game of Thrones, or going to Disney or doing something fun and interesting. So it’s something I haven’t had, which I appreciate.”

“I love that I can make her smile, apparently, like nobody else has ever done before in life,” Carpinello added. “That’s something I hear from everybody all the time. So I know there’s got to be truth behind it.”