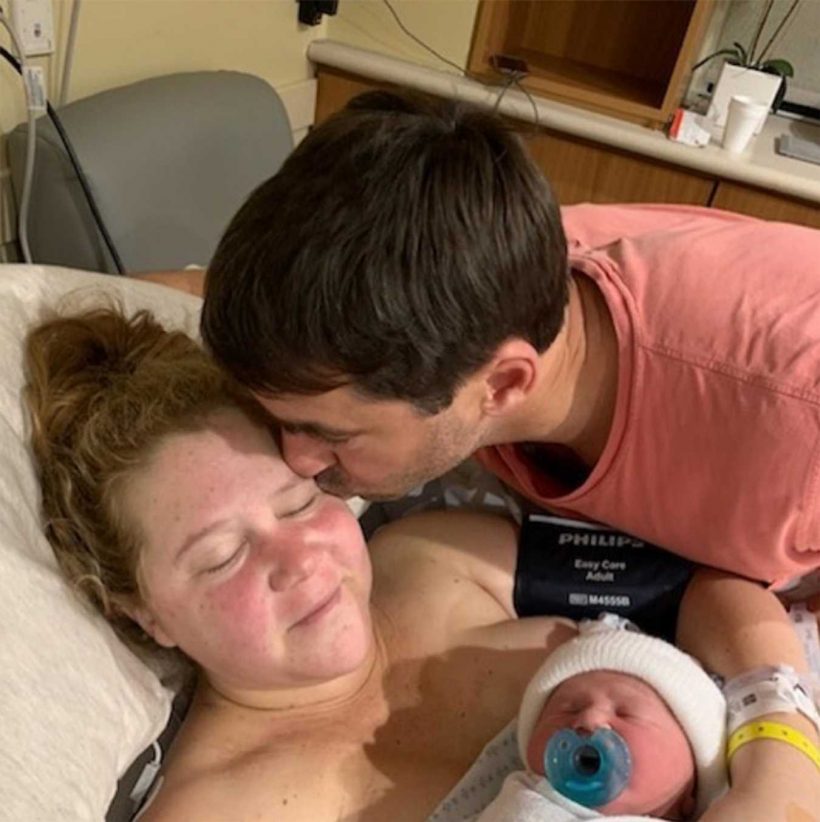 Amy Schumer is officially a mother!

The actress and comedian, 37, welcomed her first child with husband Chris Fischer on Sunday, May 5, she announced on Instagram Monday alongside a hospital photo of herself and Fischer with their newborn son.

“10:55 pm last night. Our royal baby was born,” Schumer captioned the snap, which saw the new dad leaning down to give his blissed-out wife a kiss right above the cheek.

The caption was no doubt a nod to Meghan Markle and Prince Harry, who welcomed their first child — also a baby boy — hours later, on Monday.

Minutes before the big reveal, Schumer posted two snapshots of herself posing outside the Metropolitan Museum of Art, where people were setting up for Monday’s 2019 Met Gala.

“Met look this year. Last night on the way to the hospital ?,” she joked in the caption.

Schumer first revealed her pregnancy news last October, eight months after tying the knot with Fischer, a James Beard Award-winning cookbook author and chef — although if you were just scrolling through your Instagram feed, you might have missed it!

In an Instagram Story post shared by her friend Jessica Yellin of News Not Noise, the big news was hidden at the end of a list of a list of Schumer-recommended congressional and gubernatorial candidates.

At the very bottom of the list came the simple line, “I’m pregnant — Amy Schumer.”

The comedian’s news came just days after Markle, 37, and Harry, 34, revealed they were also expecting their first child — and Schumer went on to incorporate the royal couple into her announcement, photoshopping her and her husband’s face over a snapshot of the royal couple.

“I don’t like it,” she said, later adding, “I’ve had a really tough pregnancy so far.”

Less than a month later, Schumer revealed she had been hospitalized for hyperemesis gravidarum, a condition marked by persistent sickness which can lead to dehydration and weight loss.

Although she went on to share that her baby was fine, her health crisis caused her to postpone dates on her comedy tour. Addressing her struggles, Schumer wrote in a late November Instagram post that “the last few days have been tough,” adding, “I’m grateful as hell and know it’s temporary but tough just the same.”

However, in true form, Schumer kept her sense of humor throughout it all.

A month after her hospitalization, the then-expectant star shared a candid social-media post, showing her hooked up to an IV that led to a bag of fluids behind her.

“Am I glowing? #hyperemesisgravidarum,” the mom-to-be humorously captioned her post.

And so this is Christmas ?

In another brutally honest Instagram post, the I Feel Pretty star gave fans an inside look at how she spent her Christmas.

One video from her slideshow showed Schumer vomiting on the side of a road, noting that she had thrown up some blood. She and Fischer both went on to somberly wish the person behind the camera a merry Christmas.

“And so this is Christmas,” Schumer wrote alongside the slideshow with a Christmas-tree emoji.

Amy Schumer Hilariously Confirms She’s Still Pregnant: “It Must Be Getting Annoying to You All”

After being told on doctor’s orders not to fly for a “couple of weeks” due to pregnancy complications, in February, Schumer had to end her comedy tour early. “The baby and I are healthy and everything looks good. But I am in my 3rd trimester and I am still nauseous all the time and vomiting,” she shared.

“I have a pretty good attitude about it and some days I feel good for a couple hours,” she continued. “But mostly it’s sucks [sic]. I wanted to push through and do my shows. Because I hate letting people down and I love stand up and money! But more than that I have to think about my health and the baby.”

Despite her hardships, pregnancy has had its fun moments too. Following doctor’s orders not to fly, Schumer was lucky enough to be in New Orleans in February and early March during the height of Mardi Gras festivities.

And no visit to the Crescent City is complete without a trip to Café du Monde for a bag of beignets and a consequent face full of powdered sugar — the latter of which the Trainwreck star put on display with no shame, from her mouth to her cheeks and forehead.

Amy Schumer Is Pregnant with Her First Child

This past Saturday, Schumer revealed the sex of her baby in a lengthy post where she spoke out against fast-food chain Wendy’s in the caption of a photo featuring herself and Fischer in their pediatrician’s waiting room.

“Hey! We love @chancetherapper and hate to be the ones to tell him that Wendys is the only fast food chain refusing to protect farmworker women from sexual assault and rape in the fields. This is true. Please read that sentence again,” she wrote in part.

“Also we are having a boy,” Schumer tacked on at the end of the post.