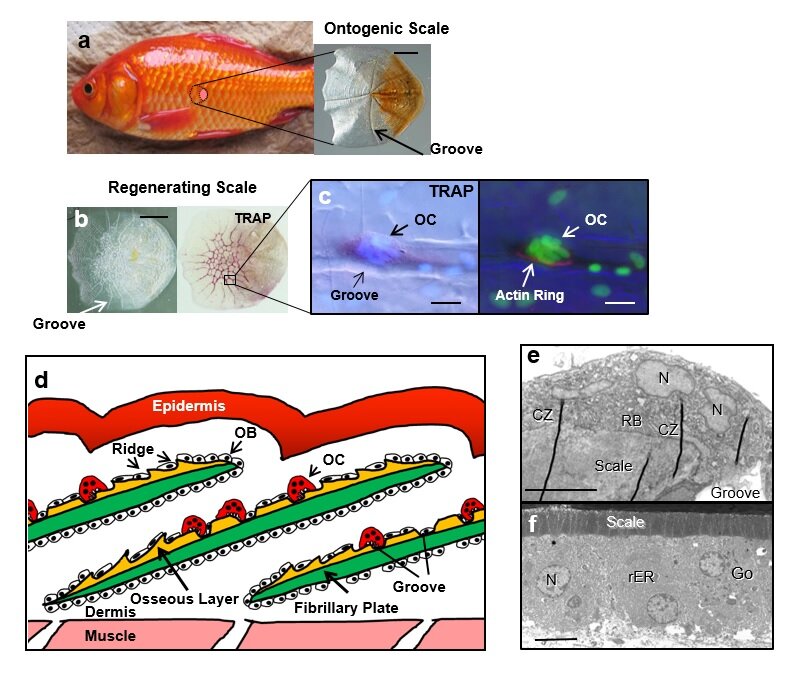 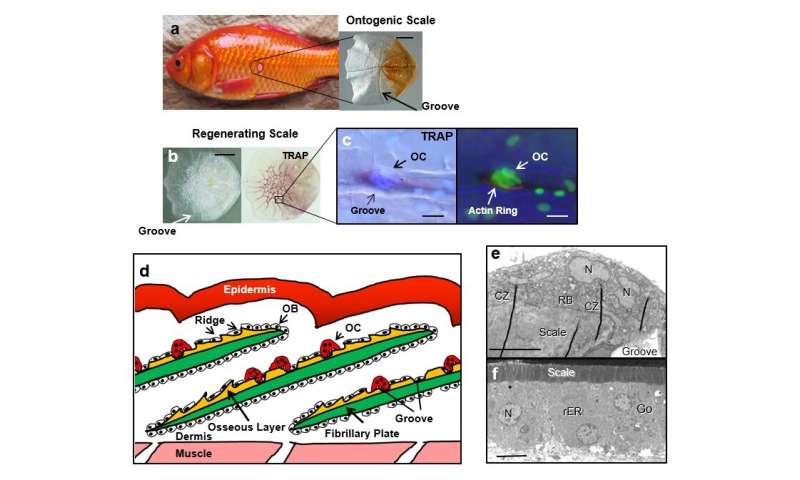 Melatonin could be a novel drug for preventing bone loss to astronauts during space flight. Here we used goldfish scales as a bone model of coexisting osteoclasts and osteoblasts and demonstrated that melatonin synthesis decreased under microgravity. Melatonin treatment of scales stimulated expression of Calcitonin, an osteoclast-inhibiting hormone, and decreased expression of an osteoclastogenesis promotor. This is the first study to report the inhibitory effect of melatonin on osteoclast activation, which is cancelled by microgravity.

For proper and healthy metabolism of bone, appropriate stimuli are necessary. In outer space with microgravity, calcium is lost from bone and bone mass is reduced. Measurement of the bone density of astronauts before and after a long stay in outer space indicates bone mass loss. At the dawn of an era where astronauts are to stay for a long period of time in an international space station, it is an urgent task to elucidate changes of osteoblasts and osteoclasts under microgravity conditions and to perform research on potential drugs as remedies. Since it is difficult in outer space to use a cell culture system that meets in vivo conditions, other experimental models are necessary.

The present research group, consisting of 53 scientists from 33 institutions, led by scientists from Kanazawa University, Tokyo Medical and Dental University, Okayama University and University of Toyama, used cultured goldfish scales to investigate the mechanism of bone loss in space. A scale contains hydroxyapatite, a fundamental element of bone, and its bone matrix of two layers (osseous layer: a thin, well-calcified external layer; and a fibrillary layer: a thick, partially calcified layer). A scale also has cells corresponding to osteoblasts and osteoclasts (Figure 1). Scales protect the surface of the fish body and play a role as a reservoir of calcium. With freshwater fish, the latter function is noteworthy; when salmon swim upstream to lay eggs, it is known that their scales get smaller in order to supply calcium to the eggs. To achieve this, osteoclasts release calcium from the scales. In addition, ground-based experiments reveal that the responses of scales to hormones and extra-gravity due to centrifugation are very similar to those of mammalian bones. Furthermore, cultured scales may be considered to be an excellent experimental model for research of bone metabolism in outer space since scales are readily available and they can be used for experiments for about 10 days at a low temperature (4ºC) without exchanging culture media. 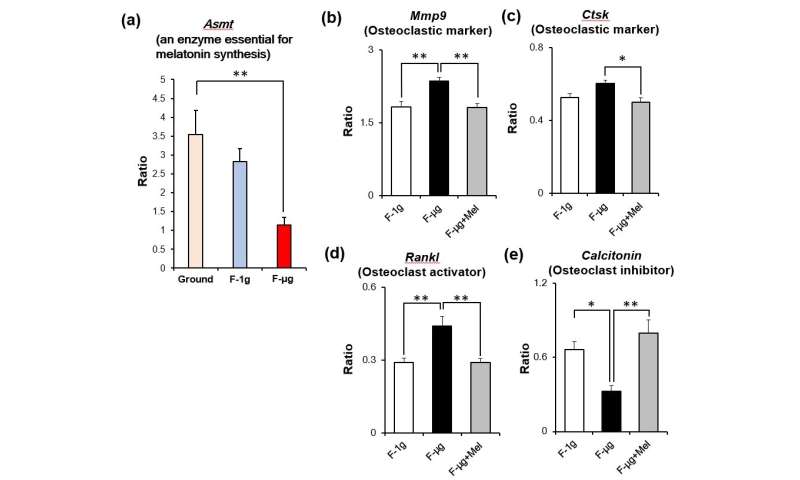 To our knowledge, no investigations have so far been performed on melatonin levels in outer space. We believe that one of the mechanisms of bone resorption under microgravity conditions could be a decrease of melatonin level to suppress CALCITONIN secretion (Figure 3). In fact, other research groups reported that the blood CALCITONIN level of a monkey decreased in outer space and that the CALCITONIN level in the blood of human subjects decreased after 120 days on a head-down tilt bed rest, a pseudo-microgravity experimental model. 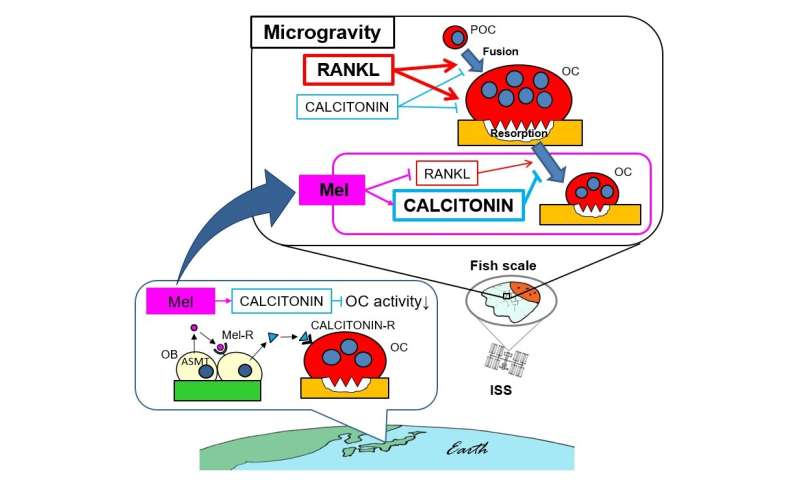 The present research group confirmed in ground based experiments that scale osteoblasts produced CALCITONIN and that melatonin enhanced CALCITONIN secretion. Due to the limitation of rocket load, experiments on morphological changes of osteoclasts due to melatonin were not possible in outer space at this time; however, ground based experiments indicated suppression of morphological changes of activated osteoclasts by melatonin by using a three-dimensional clinostat, which produces pseudo-microgravity conditions. A research paper with these results was published in a high impact factor journal based on life science experiments performed in the Japanese Experiment Module for the first time.

As above, investigation of melatonin action on bones in outer space, which had been neglected so far, revealed that melatonin suppresses bone resorption by stimulating osteoblasts to secret CALCITONIN (Figure 3).