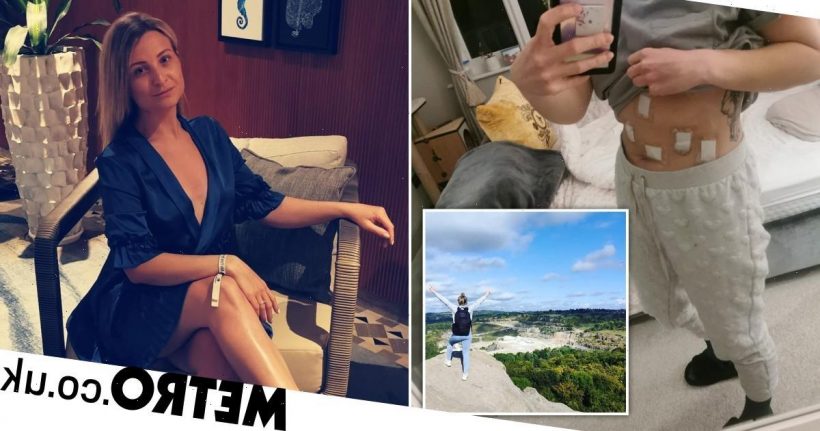 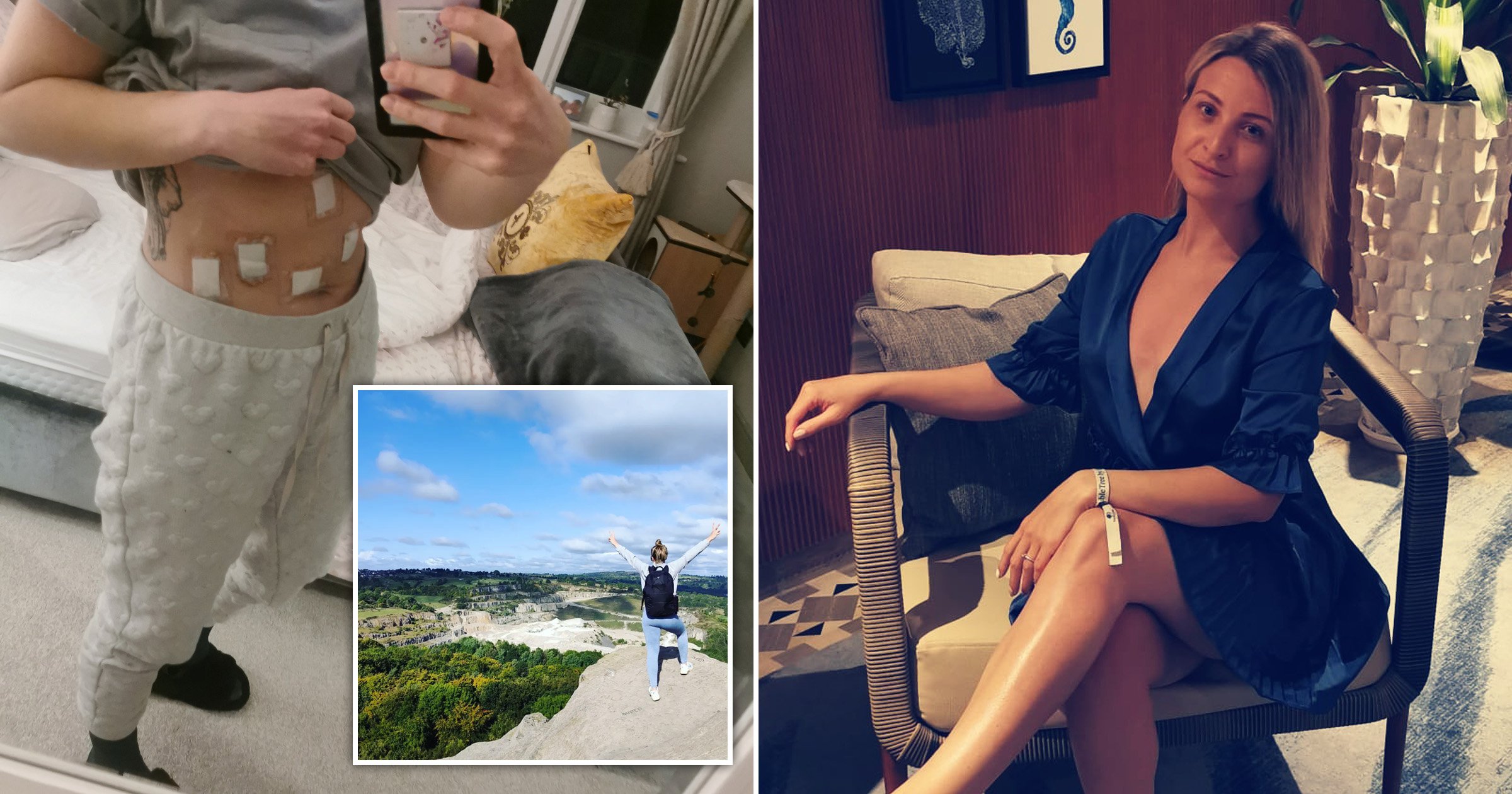 ‘You take eating and drinking for granted – so when you can’t, it’s just awful,’ explains Leah Snowden, 32, who was diagnosed with achalasia – a rare swallowing condition – last year.

‘Something so simple that comes naturally shouldn’t be a problem – but it just takes over your life.

‘I couldn’t do anything. I couldn’t go out with my friends. I couldn’t socialise. I became a bit of a recluse.’

Leah explains her achalasia – a rare disorder of the oesophagus – came out of nowhere in 2020, when she suddenly experienced difficulty while eating. But she was unsure what it was initially.

The 32-year-old, who works at Cats Protection, continues: ‘I never had problems with eating ever. I quite liked my food. It was a big hobby of mine – I liked to go out and eat.

‘I don’t really know exactly when it initially started – but I do remember my partner saying to me, probably mid-2020, “chew your food”, because all of a sudden I’d stop and choke a bit.

‘I was getting pain in my chest while I was sleeping as well.’

After visiting the doctor in April 2021, Leah was told it was probably acid reflux and was given anti-acid medication, but says this actually made her symptoms worse.

She adds: ‘I started getting really bad and every time I was trying to eat or drink I would be throwing up – because it didn’t reach my stomach. I would be regurgitating so I would throw it up. I could almost feel my oesophagus contracting.

‘I would literally have a bucket next to me while I was eating.

‘I just had to keep taking myself off to the toilet. Or sometimes I wouldn’t make it to the toilet because all of a sudden I would just throw up on the floor – or I’d do it in the sink, or on myself.’

Following another visit to the GP, Leah was put on more anti-acid medication and told to adopt a very plain diet.

When this didn’t help, she was sent for an endoscopy – where a camera was put into her stomach. But when doctors couldn’t find anything wrong, they said the condition was probably down to stress.

However, Leah remembered she had private healthcare with work, so went to get a second opinion.

After running a few tests, the doctor diagnosed Leah with achalasia in September 2021 – a rare condition that affects one in 100,000 people.

Explaining the condition in a little more detail, Leah says: ‘Following down from your oesophagus, you have like a little ring muscle called your LES and mine was basically almost completely shut and it just wouldn’t open. It just wouldn’t relax, because the muscles in my oesophagus don’t work.

The muscles in my oesophagus don’t work

While it cannot be cured, it can be treated in a number of different ways – such as with surgery.

This was offered to Leah – however, due to Covid delays, she was told she woundn’t be able to have surgery until January 2022.

While Leah understood, she became increasingly concerned about how she would eat and drink while she waited – having already lost a considerable amount of weight.

To get by during this time, she mainly lived off prescribed high-energy Fortisip drinks (often given to the elderly and very sick people) and hot chocolate.

Leah adds: ‘I think some food and drink was seeping through as my LES wasn’t completely close. I could only have things small and often. So hot chocolate seemed to work really well for me. I think the warmth maybe helped relax it.

‘With Fortisip drinks you only need quite a small amount to get enough nutrition. So I took those to work and I would have one or two throughout the day. I would just take a mouthful here and there and then sit down or stand up afterwards to try and help it go down. It wouldn’t always and then it would sort of come back up.

‘I did still try and eat solid food at that time as well. But whatever I tried to eat would just then cause me pain and I would just throw up. So, in the end, I did just give up with it. Although, I did try and liquidise my Christmas dinner last year, but that didn’t really work very well.’

Leah also had to go part-time at work as she lacked so much energy and said her partner felt awkward about eating in front of her during this time – despite her assuring him it was fine.

Also, as Leah wasn’t really able to socialise with friends and go about normal life, she felt increasingly reclusive and ‘hated’ what her life had become.

She adds: ‘The control I had over my body felt a lot less, as I didn’t know as and when the liquid and food would come up but it would at some point.

‘I was really uncomfortable most of the time and found it hard that my body wouldn’t just work “normally.”

‘My relationship with my body was also separate from mind – it was a really odd feeling that the two weren’t working together and it just felt like a battle everyday.’

By the time her operation came around, Leah had lost two stone.

However, the procedure didn’t go fully to plan as when surgeons went in to cut her LES muscle, other internal parts started splitting, too.

Following the operation Leah couldn’t eat anything for a week to see if everything would heal on its own. Thankfully, it did and she began the slow process of recovery.

She adds: ‘For me, the operation give me my life back as dramatic as that sounds. Before I was still trying to work and it was really hard because I didn’t have enough energy. And I was just constantly in pain because I had stuff stuck in my oesophagus.

‘Now, most things I can eat – as long as I chew them very, very well. But I do have to drink to push my food down, because my oesophagus doesn’t work properly.

‘But if I go out for a meal now there are certain things I’ll pick and won’t pick: I’d usually go for softer foods, like a lasagna or a soft pasta. I do try and avoid burgers, and chips. Also, I burp a lot as it releases pressure and helps food move down.

‘I also have to have pints and pints of water when I’m eating and I have to have water by me at all times. It’s just being really careful.’

Leah may need surgery again in the future but stresses that she’s just happy to ‘get her life back.’

She adds that it thankfully hasn’t changed her relationship with food too much either – as many people living with achalasia can be fearful to eat, because it can be so uncomfortable.

Leah is also urging other people to push for a second opinion if they feel something isn’t right and suspect they might have achalasia.