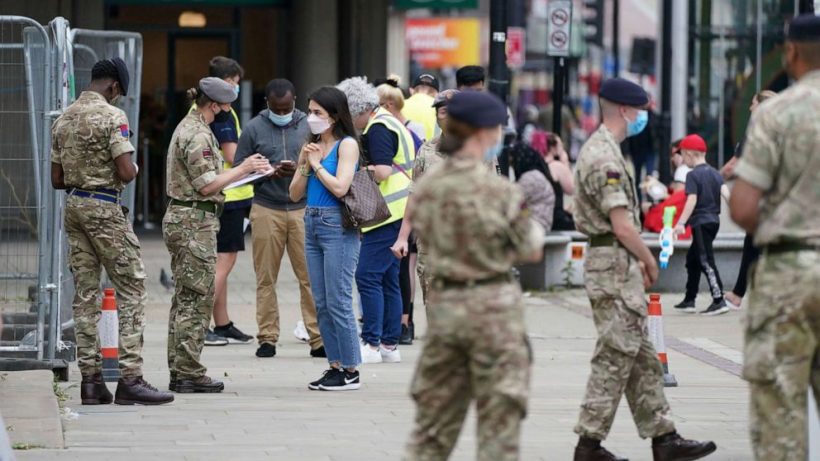 The Delta variant, which was first detected in India and which now makes up 6% of sequenced COVID-19 cases in the United States, has prompted recent calls from President Joe Biden and Dr. Anthony Fauci for more Americans to get vaccinated.

While prevalence of the variant, also known as B.1.617.2, is still low in the U.S., its prevalence has doubled since last week, rising from 3% to 6%, according to a report from HHS.

In India, where the virus exploded in April and May and sparked a public health crisis, as well as in the United Kingdom, the Delta variant is now the dominant strain. “We cannot let that happen in the United States,” Fauci said during a Tuesday news briefing.

“Get vaccinated,” he added. “Particularly if you’ve had your first dose, make sure you get that second dose. And for those who have been not vaccinated yet, please get vaccinated.”

As of Thursday, 52% of Americans had received at least one dose of the vaccine and 43% were fully vaccinated, according to the Centers for Disease Control and Prevention.

While experts agree that vaccination is the best defense against all circulating versions of the virus, there are still many unanswered questions about the Delta variant. Here’s what we know so far:

Is the Delta variant more transmissible than the original version of the virus?

Most likely, but some virologists say we need more information to be sure.

The World Health Organization classifies the Delta variant as a “variant of concern,” meaning it may be associated with increased transmissibility.

Health officials in the U.K. went further, issuing a risk assessment in early June, indicating that they believe the Delta variant is more easily spread from person to person than the Alpha variant, which was first detected in the U.K. and spread rapidly there until the Delta variant took over. According to the assessment, “it is highly likely that Delta is significantly more transmissible than Alpha.”

Dr. Ashish Jha, dean of the Brown University School of Public Health, doubled down on that message during an interview with ABC News’ David Muir on Wednesday, calling the Delta variant “the most contagious variant we’ve seen so far.”

Vincent Racaniello, a microbiology and immunology professor at Columbia University, argued that we should interpret the infectiousness of the Delta variant cautiously. The variant’s rapid rise also has to do with human behavior and relaxed restrictions and shouldn’t be strictly attributed to the virus being more transmissible.

“Preliminary results say you do see this increased transmissibility, but we still need to collect more information,” said Nevan Krogan, a molecular biologist at the University of California, San Francisco. Most of the data we have on the Delta variant is in India, Krogan explained, which isn’t tracking variants as closely as the U.K. There should be more data available now that the Delta variant is dominant in there.

“We need more data, and not just tracking and epidemiology data, but we also need molecular data,” Krogan said. “The more we understand about this virus and how it mutates, the better off we’re going to be in the future.”

“We’re actually running those experiments as we speak,” he said. “We’re going all in on all these variants.”

Are vaccines effective against the Delta variant?

Yes and for those who got the Pfizer or Moderna vaccine, it’s important to complete the two-shot regimen.

A study the British government conducted in April and May, which analyzed more than 12,000 sequenced COVID cases, found Pfizer and AstraZeneca vaccines to be highly effective against the Delta variant, although efficacy was lower for the Delta variant than for the Alpha variant of the virus. According to the study, Pfizer vaccine was 88% effective against symptomatic disease two weeks after the second dose and the AstraZeneca vaccine was 60% effective two weeks after the second dose. Since the research was conducted in the U.K., the one-shot Johnson & Johnson vaccine wasn’t included.

“For those properly vaccinated, it looks like there isn’t an issue,” Krogan said.

But for people who only received one dose of the vaccine, “effectiveness was notably lower,” the study authors note. Both the Pfizer and AstraZeneca vaccines were about 33% effective against the Delta variant after one dose.

“There’s poor protection after a single dose,” Fauci said on Tuesday, and stressed the important of getting the second shot for the two-dose vaccines.

As for the mechanism driving double-dose protection, Racaniello thinks the world has focused too much attention on spike protein mutations and antibody response, and not enough on T-cells, another part of the immune system which also defends the body against infection. “I don’t care if you’ve got Alpha, Beta, Gamma or Delta, those T-cells are still going to be able to prevent serious disease and those T-cells are made by vaccination,” he said.

Vaccination is also the key to stopping the virus from circulating and more variants from popping up, according to experts. The longer it takes to get the country and the world vaccinated the more chances the virus has to mutate.

“We’re going to be dealing with these other variants in the future that the vaccines may or may not be able to control,” Krogan warned. In his view, it’s not time to be complacent. “We’ve got to get everybody vaccinated, but we need to understand how these viruses are mutating and overcoming our defense mechanisms,” he said. “The virus has always been a couple of steps ahead of us. We’ve got to get a step ahead of it.”

This is why vaccine lottery prizes may work for some, according to psychology experts

Vaccine access, not hesitancy, still a problem for Latinos: Senators