Looking in the mirror after a boxing class, my eyes focused on the cystic acne that had spread across my cheeks – the kind that’s really noticeable and looks painful and red.

I wanted to cry.

No matter what I did and every time I tried to improve my skin, it only got worse.

Remarkably, that’s what my face was like while on prescription Roaccutane. It’s a process known as purging, where even though you’re on treatment, your acne gets worse before it gets better.

This is just one of the things I wish I fully understood before taking Roaccutane.

I first had acne when I was around 13 years old in school – and got bullied mercilessly for it.

My peers would tease me and say that you could play dot-to-dot on my face, which made me feel ugly and unable to face myself in the mirror.

As a teenager, I would go home every evening and wash my face for 30 minutes trying to remove the spots. Nothing seemed to work, so I went to the doctor and I was put on the contraception pill to solve the problem.

It did the trick and I thought that would be the end of it. That was, until I hit my mid thirties.

I don’t know what triggered adult acne but, believe me, I tried to find out.

For several months, I tried different washing detergents, face washes, vitamins and switching up my diet. I also looked into what serums and acids were best to use and watched several YouTube videos trying to return to clear skin, but nothing would work.

My confidence began to crumble, as all the old taunts from my school days would play out when I looked in the mirror.

After over a year of trying to fix my skin myself, I went to my doctor, who put me on various antibiotics. These didn’t work and each one took six months to trial – leaving me feeling more and more desperate. 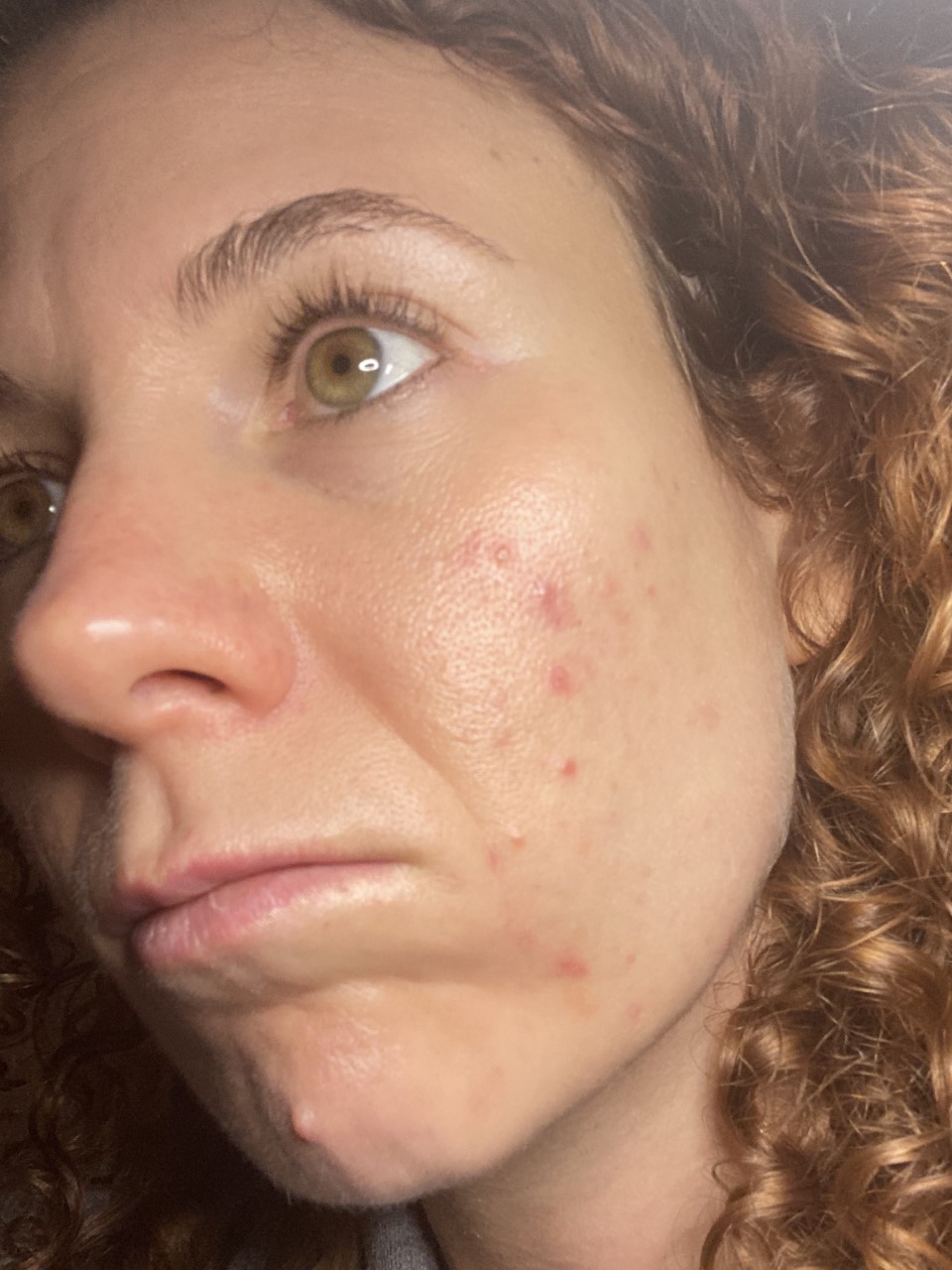 That’s when I started talking to a few people who had been on Roaccutane, which is a retinoid-based pill aimed at treating severe acne. A friend had said the pill was amazing and had worked wonders after she was prescribed it, leaving her with clear skin.

I was led to believe that there was a wonder drug called isotretinoin, which is more commonly known by its brand name Roaccutane in the UK or Accutane in the US.

After two years of trying to work out a different way of treating my acne, I was finally prescribed it. I felt hopeful in the doctor’s office, but also that this was a last resort and I was nervous in case it didn’t work, as it had been such a long time getting to this point.

Before I could start taking it, I had to sign paperwork declaring that I would not get pregnant while taking the medication. This is because conceiving on the drug can cause birth defects, which made sense to me. I wasn’t planning to get pregnant anyway so that was fine.

The document I signed also told me to use two forms of birth control. To ensure you don’t get pregnant with a baby that could potentially have birth defects.

I have a coil, which is ‘more than 99% effective’ – according to the NHS website – but I was told to use external protection too, like condoms.

When I asked the nurse about being instructed to use two forms of contraception via the form, I didn’t get much of a response – more a shrug of the shoulders and a look that told me it’s better to be safe than sorry.

I was warned about a lot of side effects before taking the medication. It felt quite intense but due to all the months spent trying different skin care regimes and antibiotics I would have tried anything.

Taking the first pill felt like making a commitment, I was excited about looking to a future with clear skin but the intensity of the side effects weighed heavily on my mind.

Within two months, the medication zapped me of my sex drive, as well as caused dry lips, aching bones, fatigue and dry skin. I became an expert on lip balms – needing to apply them every 15 minutes and had to cut down my time at the gym, further decreasing my energy and morale.

Another serious side affect of the drug is depression, according to the NHS website.

Having suffered from depression in the past, I knew while I was taking the pills that I didn’t feel right. I would feel low and not want to go out, pushing people away and feeling unconnected. But I pushed myself to last the six months of treatment, I’d got this far.

Thankfully, four months into using the medication – and after the aforementioned purging – my skin finally cleared up. I felt elated that things were improving, my complexion was clear and my outlook began to improve.

Other things that can be affected throughout the course of the medication – and for up to six months afterwards – are sun exposure, laser hair removal, injectables or facial peels, taking retinol and giving blood.

The common response I got when discussing it with friends and colleagues was, ‘your skin looks great though’. But was it worth it?

Given the choice again, I would have looked into dermatologist recommendations instead of taking Roaccutane.

Yes, they are expensive but at some point, we should start investing in ourselves rather than potentially toying with our mental health on prescriptions that may cause side effects like depression.

In our last meeting, the nurse warned me there’s a 20% chance once you conclude the treatment that the acne can return. I’m hoping this doesn’t happen to me further down the line.

All I want by sharing my story is for people to be able to make informed decisions about what goes in their body – and whether or not the risks are worth it.

Metro.co.uk’s weekly The Truth Is… series seeks to explore anything and everything when it comes to life’s unspoken truths and long-held secrets. Contributors will challenge popular misconceptions on a topic close to their hearts, confess to a deeply personal secret, or reveal their wisdom from experience – good and bad – when it comes to romance or family relationships.