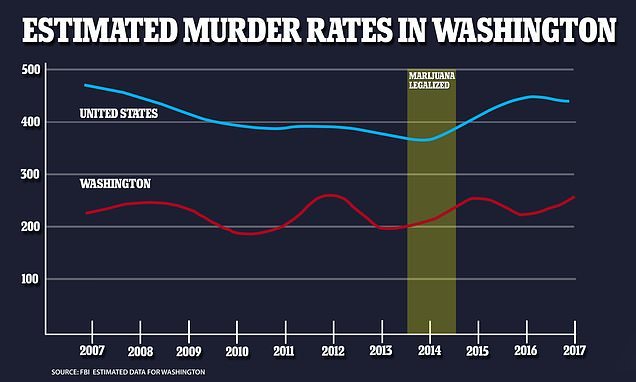 Does marijuana make people violent? Washington state’s murder and assault rate surged 40% after drug was legalized – and experts insist that’s not a coincidence

A new book claims that marijuana causes aggression, psychosis, suicides, violence – and that its legalization in Washington even triggered a 40 percent increase in murder rates.

There is little concrete information about the drug’s benefits (despite plenty of claims) because its illegality has made it difficult to study.

But according to former New York Times reporter Alex Berenson, there is clear evidence that marijuana is not as safe – and certainly not as curative – as the pro-cannabis groups would have us believe.

Writing in his new book Tell Your Children: The Truth About Marijuana, Mental Illness, and Violence, Berenson weaves together various findings – including studies showing cannabis can cause mental illness, the 50-percent increase in schizophrenia hospital admissions since 2006, and Washington’s murder rate statistics, which shot up to its highest point in recent years after the state became the first to legalize pot.

Public health officials are hesitant to conclusively connect these dots, but Berenson insists the correlation has been seen too many times to be a coincidence: ‘That debate is over. By any reasonable standard, the connection has been proven.’

The evidence of ‘marijuana’s link to psychosis and violence,’ he says, ‘is so strong, the issue so misunderstood, and the consequences so severe.’ 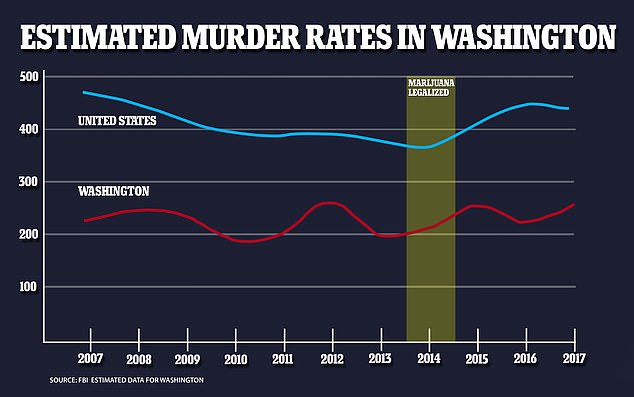 Marijuana became available for the citizens of Washington state in July 2014, after it was legalized for recreational and medical use in 2012. Shortly after, the murder rate spiked, dipped marginally, then spiked again. A new book claims that increase is no coincidence

MARIJUANA’S LINKS TO PSYCHOSIS AND VIOLENCE

Berenson is open about the fact that he strongly believes marijuana wrecks havoc in the brain, and that all the evidence points that way.

You will be hard pushed to find a public health official that will say the same.

The National Academy of Medicine still errs on the side of ‘we’re not sure’ after publishing a review of research on the health effects of marijuana. The US Surgeon General, Jerome Adams, closed 2018 saying he believes marijuana should be legalized so we could better understand its effects on the brain. The former US Surgeon General, Vivek Murthy, famously said marijuana ‘can be helpful’ in medicine but ended his tenure warning that legalization is moving faster than science when it comes to marijuana.

But Berenson says you don’t need new data to see the impact.

Although states do not collect data on how many people suffer from psychotic illnesses, there has been a sharp rise (50 percent) in the number of people hospitalized for schizophrenia since 2006, alongside marijuana’s rise. In fact, other developed countries have seen the same, such as Denmark, where schizophrenia is up 25 percent, and Finland, where the rate is up 100 percent. And Berenson points to marijuana as a possible driver.

The classic counter argument is that psychosis (a complex condition) is caused by other factors, and marijuana has offered relief for people with mental illness.

But last year, a team of scientists in Montreal, Canada, found ‘it was cannabis use that predicted future violent behavior’ in patients at psychiatric hospitals.

The team spent a year tracking 1,136 men and women on psychiatric wards in three US cities (Missouri, Massachusetts, and Pittsburgh), interviewing them five times after they were discharged.

The ones who had used marijuana were twice as likely to experience violent outbursts than those who hadn’t.

They concluded that the marijuana-violence connection was ‘uni-directional’ (from marijuana to violence).

Also last year, psychiatry professor Robin Murray of King’s College London presented a review of 10 other studies show a clear correlation between cannabis use and psychosis.

One of those studies found that the risk of psychosis went up as the potency of the cannabis increased – which is significant, given that the THC (the psychoactive property of cannabis) used in the US is now around 20 times stronger than it was in the 70s.

WHAT DOES WASHINGTON’S MURDER RATE TELL US ABOUT CANNABIS?

Most homicide rates (both at state level and national level) follow a fairly steady direction over the course of 10 years – some veering up, some down, with few erratic piques and troughs.

Washington’s murder rate is slightly different: it has snaked up and down quite consistently over the last 15 years, so it is a difficult measure to use in a short-term analysis of marijuana’s impact on society. But that hasn’t stopped people – both for and against legalization – from having a go.

The latest figures we have are from 2017, showing the murder rate had hit a new high, marginally exceeding 2012.

Marijuana was legalized for recreational use in 2012, and the drug became available to the public in July 2014, in the midst of a murder rate increase.

In 2016, pro-marijuana groups rejoiced at the murder rate dip, which many took to be a sign of marijuana’s relaxing effects taking hold state-wide.

However, its dip was far shallower than in previous years, and not long after, it continued its trend up – this time to a new high.

Was the post-legalization increase all a fluke of data?

That psychosis (when someone’s thought and emotions are disconnected from reality) is linked to homicide is a fact. The wealth of studies he presents should be evidence, he says, to convince the reader that cannabis is clearly linked to psychosis, and therefore to the murder rate.

The fact that we don’t all turn into murderers after smoking a joint doesn’t change that, he says, writing:

‘Yet we’re able to sort of keep those two ideas in our head: that there’s one kind of alcohol consumption that can just put [people] to sleep, and there’s another kind that can cause violence.

‘With marijuana, those two things are also true, but we’ve sort of forgotten the second thing exists.’

Doug Fields, a prominent neuroscientist who has studied marijuana’s effects on the brain, backs him.

‘You won’t find anyone in the scientific community that doesn’t believe [that cannabis is linked to violence],’ Fields, who has written extensively on the topic, told DailyMail.com.

‘The receptors in the brain [that cannabis stimulates], they are in the brain for a reason. They have a function,’ he explains. Messing with them is ‘like putting a monkey wrench in the system.’

That’s what all drugs do – opioids, cocaine, ketamine.

But Fields warns that many see marijuana as different because it’s from the ground; the idea is that something from the earth could only enhance what’s already going on in the brain.

‘The scientific evidence for cannabis having a [detrimental] effect, especially on the adolescent brain, is quite strong and well-replicated and diverse,’ he explains.

Fields said he has long been concerned about how marijuana impacts the brain, and the long-term impact on society.

But still, he says, he was taken aback by the atmosphere at last year’s meeting for the World Psychiatric Association in Berlin.

‘The sense of that meeting in Berlin was that they were viewing Americans as guinea pigs,’ he said.

If that is true, if there is unequivocal evidence that an increasingly legal drug is setting the stage for homicides, why would health officials not say it?

‘They speak in the cautious language of scientific inquiry. And they’re busy treating patients. Meanwhile, the marijuana lobby shouts: legalize, and everyone wins – except pharmaceutical companies and prison guards.

‘No wonder the people who know the truth have so much trouble being heard.’

Fields says: ‘Marijuana has become an enormous business in this country so there are a lot of powerful special interests at stake, who are saying that marijuana is perceived as safe. You have to take that into account.’

Of course, these views draw no shortage of criticism.

IF THIS IS ALL TRUE, WHY SHOULD MARIJUANA BE LEGALIZED?

First, it is imperative to say: cannabis does not cure cancer. There is no evidence to prove that internet myth (for those looking for promising cancer treatments, read up instead on immunotherapy, the most encouraging new treatment in oncology).

As for benefits, evidence supports four:

Beyond that, there isn’t sufficient research beyond anecdotal evidence.

US Surgeon General Jerome Adams has widespread support in his call for more research, not necessarily broader use of the drug.

Berenson says he’s seen enough, we don’t need to look into it further.

But he does back decriminalization to release the millions of Americans (mainly black men) who are doing time for possession, and prevent any more from following the same fate. (‘If they’re dumb enough to smoke in public, the police should take their joints and ticket them.’)

As for consumption, what should readers know? The end result is that there are clear documented down sides, potentially some good sides (but none that are clearly proven), plenty of gray areas, and no shortage of opinions.